Nathan McDow, who lived about five miles north of Alexander, in Erath County, was about one-half mile from his home hauling rails, and was assisted by one son. The two were massacred by Indians and this massacre was fully explained in a letter written by Hon. H.S. Coleman, then County Judge of Erath County, to Gov. J.W. Throckmorton. Hon. H.S. Coleman said:

On last Wednesday, the 23rd instant (January), there were two persons, Nathan McDow and son, killed. They were engaged in hauling rails, and were attacked by eight or ten Indians. Another son of Mr. McDow heard them firing from the house, and ran to their rescue. He arrived in time to see the Indians making off, and found his father and brother both dead and scalped.

Mr. McDow and son were buried in the West End Cemetery at Stephenville.

Note: Author found the above letter on file in the Archives at Austin, in the Texas State Library; also interviewed Berry Parr, Ike Roberts, and others who were living in Erath County at the time.

J.W. Wilbarger includes a version of this story in his book, Indian Depredations in Texas. 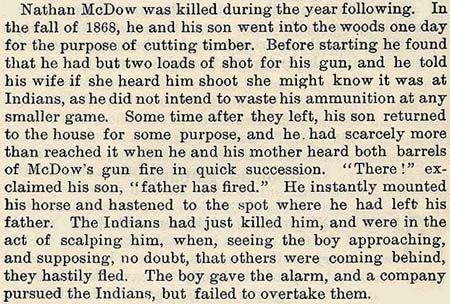