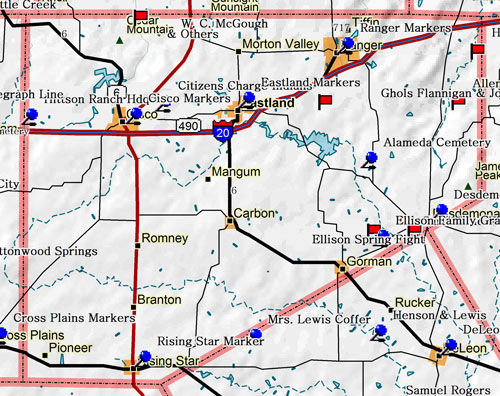 Marker Title: Alameda Cemetery
City: Desdemona vicinity
Year Marker Erected: 1998
Marker Location: 8 mi. NW of Desdemona on FM 2214; 1 mi. N on FM 571; 1.2 mi. W. on CR 483.
Marker Text: The earliest Anglo settlers in this area were drawn together by the harsh life they found in Texas. William Mansker, who came to Texas with his family in the mid-19th century, set aside a portion of his land for use as a school and community cemetery. The first burial in Alameda Cemetery is the subject of some debate. One legend tells of a baby stolen by a large panther; another pertains to Amanda Elizabeth (Henshaw) Coffer, identified on a plaque in the cemetery as Martha Coffee, said to have been killed by Indians in 1860, at Alameda community's peak. In the late 19th century the Alameda Cemetery Association was formed. A tabernacle and community center was erected inside the cemetery. In 1911, E.L. Reid bought the Mansker land and deeded approximately 5 acres to the Alameda Cemetery Association. Though the community of Alameda had dwindled to only four homes near the cemetery by 1936, the cemetery continued to thrive. A 1996 count revealed 879 graves, several marked only by rocks, in seven acres. Veterans of several American and international wars and conflicts are interred here. Family clusters like that of the Bell children, four of whom died in 1877, testify to the conditions endured by these pioneers. Alameda Cemetery is still in use. (1998)

Marker Title: Camp Salmon, C.S.A.
City: Eastland
Year Marker Erected: 1963
Marker Location: North side of courthouse lawn, Main Street.
Marker Text: Guarding the frontier during the Civil War, this camp was located 17 mi. west, 6 mi. north. Established as part of a chain of posts a day's horseback ride apart stretching from Red River to Rio Grande. Occupied by Texas Frontier Regiment. Named for Capt. John Salmon, frontier Indian fighter and post commander. Later renamed Camp McCord. Short of food, supplies, ammunition, horses, troubled with Indians, and sharing few of the glories of the war at the cost of many lives, these men served to protect the Texas frontier. TEXAS CIVIL WAR FRONTIER DEFENSE 1861-1865: Texas made an all-out effort for the Confederacy after voting over 3 to 1 for secession. 90,000 troops, noted for mobility and heroic daring, fought on every battlefront. An important source of supply and gateway to foreign trade thru Mexico, Texas was the storehouse of the South. Camp Salmon and other posts on this line were backed by patrols of State Rangers, organized militia, and citizens' posses scouting from nearby "family forts." This was part of a 2000 mile frontier and coastline successfully defended by Texans.

Marker Title: Eastland
City: Eastland
Year Marker Erected: 1968
Marker Location: SE corner of courthouse lawn, Commerce Street.
Marker Text: County seat, Eastland County. Named for William M. Eastland--Texas War for Independence hero who was in Mier Expedition against Mexico, and was executed in "Black Bean" lottery at Rancho Salado in 1842. Most noted early local people were Comanches, who resisted occupation of area by white settlers. The last recorded Indian raid in county was in 1874. Eastland was named county seat in an election on Aug. 2, 1875. With 250 people it was incorporated on June 6, 1891, and W.Q. Connellee was elected as mayor. After a discovery in 1917, one of the fabled oil booms of Texas occurred nearby, with Eastland center for legal matters. With oil priced $2.60 a barrel, many wells flowed at 10,000 barrels a day. The city quickly grew to 25,000 people; 5 banks prospered. Coming here to seek "black gold" were celebrities, including evangelist Billy Sunday, circus owner John Ringling, sports figures Jess Willard, Tex Rickard. An international wonder-story happened here: the old courthouse cornerstone was opened (on this site) in 1928 to reveal survival of "Old Rip", a horned toad placed there with other mementoes on July 19, 1897. Continuing oil production, agricultural processing and clay products bolster the present economy. (1968)

Marker Title: Ellison Family Graveyard
City: Gorman vicinity
Year Marker Erected: 1977
Marker Location: From Gorman take FM 8 east about 3.5 miles, on north side of highway.
Marker Text: The first settler in this part of Eastland County, James Madison Ellison (1840-1923) built a cabin near Ellison Springs in 1858. He married Eliza Jane McGough and was a stock farmer in this area for half a century. As a young man, he was permanently disabled while serving in a militia company defending frontier homes against hostile Indian attack. Ellison established this cemetery after the death of his mother Nancy Baird Ellison (1818-1876), a native of Georgia and midwife for her pioneer neighbors. Although intended for family burials, the plot has always been available to friends and others in need. An unknown child, from a family who camped on Ellison's land as they moved west, died of pneumonia and was buried here. Ellison's son John, his younger son J.T., killed in a fight over a horse, and his daughter Lanie are among the 12 family members interred here. The cemetery contains 26 graves in all. In 1901 the land was legally deeded for use as a graveyard. In 1918 petroleum was discovered in the county, and Ellison leased his land for oil exploration. He moved to the Rio Grande Valley with a granddaughter and her family, and bought a citrus farm. He died there in 1923 and now lies buried in the family cemetery. (1977)

Marker Title: Ellison Springs
City: Gorman vicinity
Year Marker Erected: 1974
Marker Location: From Gorman take FM 8 about 3.5 miles, on north side of highway.
Marker Text: Used for centuries by Indians inhabiting the region. Named for James Madison Ellison (1840-1923), a native of Alabama, who was the first settler in this section of Eastland County, erecting a cabin near the springs in Oct. 1958. He soon married Eliza McGough, a member of another pioneer family, and had 3 children. During the Civil War, frontiersmen organized militia companies for mutual protection against the Indians. Ellison joined the company mustered from Eastland, Shackelford, and Callahan Counties. On Aug. 9, 1864, a group of 12 scouts from the company was attacked near the springs, and took refuge in Ellison's cabin. The commander, Capt. Singleton Gilbert, and Leroy "Button" Keith were killed, and Ellison, Tom Gilbert, and Tom Caddenhead wounded. Ellison was disabled for life. After cessation of Indian activity, Ellison Springs became the center of social and cultural functions for the scattered settlers in the area. Picnics, community gatherings, and brush arbor camp meetings were held at the site. In the early 1870s, a Baptist church was constructed, with the Rev. C. Brashears as minister. A cemetery was begun in the mid-1870s. The present frame house at the springs was built by Ellison in 1886. (1974)

Marker Title: Hargus Farm
City: Eastland vicinity
Year Marker Erected: 1982
Marker Location: North access road to IH-20, just west of SH 69 interchange, 2 miles east of Eastland.
Marker Text: North Carolina native Larry Hargus (1810-87) and his wife Mary (Corder) (1824-1910) came to Eastland County in 1879. In 1881 they bought the original tract of their farm at this site from C.U. Connellee, a founder of Eastland. Members of the Hargus family were active in the development of a local Methodist church and a son, James, was a Texas Ranger and a Civil War veteran. The family farm was later inherited by Larry Hargus' son Barry, who lived here with his wife Mackie (Gilbert) and eight children. This land has remained in the family for over 100 years. (1982)

Site of J.H. McCleskey No. 1, Discovery Well of the Ranger Oil Boom

Marker Title: Site of J.H. McCleskey No. 1, Discovery Well of the Ranger Oil Boom
City: Ranger
Year Marker Erected: 1995
Marker Location: From Ranger take FM 101 west, just 0.1 mile past city limits. Turn south onto CR 459 to its end, past gate and onto oil derrick replica.
Marker Text: The Texas and Pacific Coal Company struck oil at 1,000 feet about 10 miles east of Ranger in 1915. This event raised the hopes of area ranchers, farmers, and businessmen struggling to survive an economic slump brought on by severe drought and boll weevil-ravaged cotton fields. Oil expectations mounted then subsided when subsequent test-drillings turned up dry holes. Desperate local leaders sought out Texas and Pacific Coal Company general manager William Knox Gordon in nearby Thurber to help them continue the search for oil. Contrary to the conclusions of some geologists, Gordon believed oil lay much deeper within the earth than the depths reached by previous test drillings. Gordon agreed to drill to a depth of 3,500 feet and on July 2, 1917, contractor Warren Wagner began drilling here on J.H. McCleskey's farm. On October 17, 1917, at a depth of 3,432 feet, McCleskey Well No. 1 hit pay sand and roared in with an estimated daily flow of 1,600 barrels of oil. The well was plugged on May 18, 1920. J.H. McCleskey Well No. 1 sparked the much-heralded, wild, and prolific Ranger oil boom that gained Ranger international fame as the town whose oil wiped out critical oil shortages during World War I, allowing the Allies to "float to victory on a wave of oil." (1995)

Marker Title: Old Mobley Hotel
Address: 104 E. 4th
City: Cisco
Year Marker Erected: 1970
Marker Text: First hotel owned by Conrad Hilton, who proceeded to become "The World's Foremost Innkeeper". Built in 1916, who sold out (1919) during Cisco's great oil boom to Hilton, then a 32-year-old ex-legislator and banker from New Mexico. On night of purchase Hilton "dreamed of Texas wearing a chain of Hilton hotels". In time reality outran that dream. Hotel was in use many years after sale by Hilton in 1925. Recorded Texas Historic Landmark - 1970

Marker Title: Rising Star
City: Rising Star
Year Marker Erected: 1968
Marker Location: City Park, Highway 36 at west side of town
Marker Text: First settlers--families of Andrew Agnew, Isaac Agnew, Fletcher Fields, David McKinley, Allis Smith and W. W. Smith--arrived in a wagon train from Gregg County, Jan. 6, 1876. Area was known for hardships: Indian raids, vigilante activities, gunfights. But a stable community developed around log school-church building erected in 1876. First store was founded about 1879 by Thomas W. Anderson and son William. Post office established 1880. The most creditable story as to how the town got its name is that the settlers suggested the name Star for the post office but it was rejected by the U.S. Postal authorities as another Texas town had that name. The settlers argued all night over the name selection, looked up and saw the morning star as they started home from their meeting and agreed to call it Rising Star. The city was first incorporated in 1891. In a 1905 election, there was a vote to dissolve the corporation but the charter was restored later the same year. Rising Star is the home of Texas (1939-1941) poet laureate Lexie Dean Robertson. Unique local structure is city hall built of stone from buried petrified forest. Economy is based on ranching, farming (a chief crop is Spanish peanuts), commercial pecans, industry, oil. (1968)