Ghols Flannigan and Joe Smith left the Flannigan Ranch for Blair's Fort, which was located near the present town of Desdemonia. When they had gone only about one mile to the southeast, and were about three miles south of the present town of Ranger, they were suddenly charged by Indians. Joe Smith was painfully wounded with an arrow in his knee and Ghols Flannigan who fell or jumped out of the wagon received a mortal wound. The sudden appearance of the savages frightened the oxen, and caused them to run away with wounded Joe Smith in the wagon. After they had run for a considerable distance, and caused the wagon wheels to hang on a tree, Joe Smith hastily retreated into the thick timber where an Indian would seldom charge. Here he waited for Ghols, but Ghols never came. Joe's knee soon became exceedingly painful and he decided he had better go to the ranch and report their experience. Gad Reese went at once to see about Ghols, and found him dead and scalped. He then returned to the Flannigan home and shortly afterwards, Reese and Ral Smith brought the body to the ranch. The following day Lyman McCain, Mr. Highsaw, and, perhaps, one or two others came over from adjoining Colony Creek. This tragedy occurred December 16, 1860, and the deed was, no doubt, done by the same savages that wounded Mrs. Cohen during the preceding day.

February 1, 1886, after being embedded in Smith's knee for twenty-five years, two months and five days, a part of an Indian point worked its way to the surface, and was extracted.

Note: The author personally interviewed W.C. McGough; Mrs. Sarah Jane Keith and her sister, sisters-in-law of Joe Smith and daughters of C.C. Blair. Also interviewed others, all of whom were living in this section at the time.

The following second version of the attack is from the book, Indian Depredations in Texas, by J.W. Wilbarger. 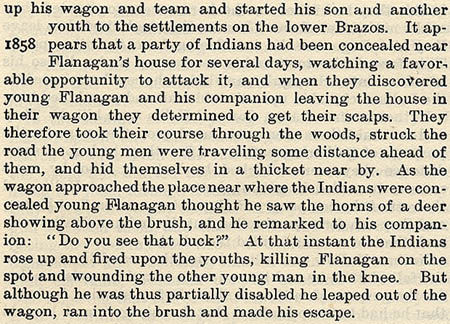