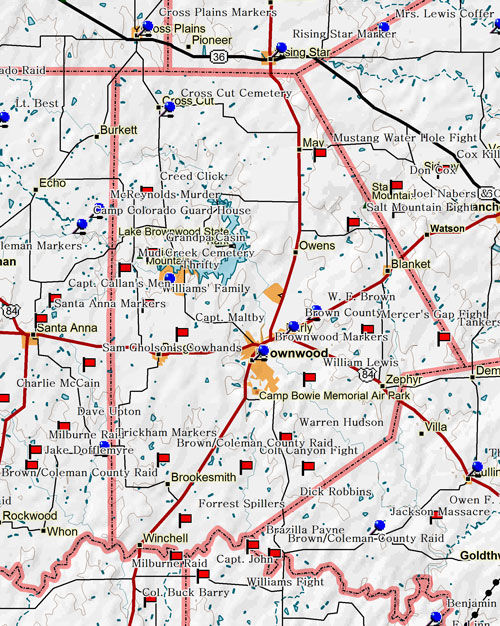 Marker Title: William Franklin Brown
City: Early
Year Marker Erected: 1982
Marker Location: Jones Chapel Cemetery, County Road 346 off US 377, Early.
Marker Text: (Apr. 9, 1820 - Dec. 23, 1918) In 1857 Georgia native William Franklin Brown moved to this area, where he was a pioneer cotton farmer. The following year he led in the organization of Brown County and was elected to serve as district clerk and as justice of the peace. He also participated in early defenses against hostile Indians. Married three times, Brown was the father of 12 children, several of whom died as a result of frontier tragedies. (1982)

Marker Title: The Rev. Noah Turner Byars
City: Brownwood
Year Marker Erected: 2001
Marker Location: Howard Payne University campus, Austin Ave. at Center Ave.
Marker Text: Noah T. Byars (1808-1888) played an integral role in the establishment of the Baptist denomination in Texas. Born in Spartanburg, South Carolina, he arrived in Texas in the early 1830s and set up a blacksmith/gunsmith shop at Washington-on-the-Brazos, where delegates met and adopted the Declaration of Independence from Mexico on March 2, 1836. Immediately following the declaration, Byars was appointed armorer of the Texas army. Following victory at San Jacinto, he served as sergeant-at-arms of the Texas Senate and justice of the peace in Travis County. A charter member of the Baptist church established at Washington-on-the-Brazos in 1838, Byars was ordained to preach on October 16, 1841. The Baptist State Convention appointed Byars as its first missionary in 1848. Credited with founding more than 60 churches and four Baptist associations, Byars devoted the last 40 years of his life to establishing congregations on the Texas frontier. He helped organize the First Baptist Church of Brownwood in 1876. After moving permanently to Brownwood in 1882, Noah Byars began writing letters to other Baptist ministers urging the creation of a Baptist college in central Texas. That idea was brought to fulfillment under the leadership of Dr. John D. Robnett, pastor of Brownwood's First Baptist Church, with the opening of Howard Payne College in 1889, one year after Byars' death. He is buried in Brownwood's Greenleaf Cemetery. (2001)

Marker Title: Camp Collier, C.S.A.
City: Brownwood
Year Marker Erected: 1963
Marker Location: Brown County Courthouse, Broadway and Center, Brownwood.
Marker Text: Located 13 mi. southwest, this camp was one of a chain of Texas frontier posts a day's horseback ride apart from the Red River to the Rio Grande. Occupied by the Texas Frontier Regiment. Patrols and scouting parties frequently sent out kept Indian actions in check and rounded up draft evaders. Always needed were food, clothing, horses, ammunition. These men shared few of the glories of the war. Yet at the cost of the lives of not a few of them, these Confederate soldiers managed to bring a measure of protection to a vast frontier area. Texas Civil War Frontier Defense Texas made an all-out effort for the Confederacy after voting over 3 to 1 for secession. 90,000 troops, noted for mobility and heroic daring, fought on every battlefront. An important source of supply and gateway to foreign trade thru Mexico, Texas was the storehouse of the South. Camp Collier and other posts on this line were backed by patrols of State Rangers organized militia, and citizens' posses scouting from nearby "family forts." This was part of a 2000 mile frontier and coastline successfully defended by Texans. (1963)

Marker Title: Connell Cemetery
City: Brownwood vicinity
Year Marker Erected: 1997
Marker Location: 3 mi. SE of Brownwood on FM 2525, right on CR just before FM 2126.
Marker Text: William Connell came to Texas with his family in 1834. He later served in the Republic of Texas Army, the Texas Rangers, and the Confederate Army. Connell Cemetery, believed to be one of the oldest in Brown County, was probably in use before 1861. When William and Loumisa Wills Connell buried their son William Archibald in 1866, they erected what is believed to have been the first headstone on this site. The last was that of Edward Bruce McCallum, dated 1949. Sixteen families are noted; over twenty graves remain unmarked. Connell Cemetery was deeded to Brown County in 1893. (1997)

Marker Title: Cross Cut Cemetery
City: Brownwood vicinity
Year Marker Erected: 1997
Marker Location: SH 279, 24 miles northwest of Brownwood.
Marker Text: Settlement began in this area of Brown County after the Civil War when several families from southern states moved here. They formed a community, initially known as Cross Out. It became Cross Cut in 1897 when an error was made on a post office application. Caroline Pentecost Elsberry was the first person buried in this community cemetery in July 1879. The two-acre plot of land dedicated as a graveyard is believed to have been donated by Mark and Sarah Pentecost. Oil was discovered in 1923 in the Cross Cut sand formation. The small town quickly swelled to accommodate the increase in population and several new businesses were added. By 1940 the population of the town was exceeded by the number of burials in the cemetery. In 1954 the Cross Cut School consolidated with Cross Plains Schools, and the town declined thereafter. Only a few buildings and the cemetery remain. Among those buried here are early settlers and their descendants, and veterans of conflicts from the Civil War through the Vietnam War. A cemetery association was formed in 1976, and a perpetual care trust was established. The site continues to serve the area. (1997)

Marker Title: Greenleaf Fisk
City: Brownwood
Year Marker Erected: 1968
Marker Location: Courthouse square, Center and Broadway, Brownwood.
Marker Text: "Father of Brownwood" (1807-1888) Donor of present townsite of Brownwood, Fisk was noted as a soldier, public servant, surveyor, and businessman. The son of English parents, he was born in New York. As a boy he was so studious that he voluntarily gave up recess periods to read. In 1834 he abandoned his preparation for the Presbyterian ministry and, with a friend, embarked down the Ohio River on a skiff to brave the Texas frontier. Settling at Mina (present Bastrop), he fought in the Battle of San Jacinto in 1836. He later served in various county offices in Bastrop and Williamson counties and was a senator in the Republic of Texas. As a government surveyor in this period, he mapped this region and like it so well he determined to settle here. Having received in 1846, for his service in the Texas Revolution, a large land grant in this vicinity, he moved here in 1860. Besides teaching, he also served as county judge and in other offices. When difficulties arose over the location of the county seat, he donated 60 acres for the town and 100 acres for county purposes. He then persuaded many citizens to move here from the old townsite. At his death in 1888, Fisk was buried in Greenleaf Cemetery. He married twice and had 15 children. (1968)

Marker Title: Mud Creek Cemetery
City: Bangs vicinity
Year Marker Erected: 1983
Marker Location: From Bangs take US 84 west one mile. Turn north onto FM 585, continue 1/2 mile past FM 2492. Turn west onto county road and continue one mile to cemetery. On south of highway through cattle guard.
Marker Text: Named for nearby Mud Creek, this graveyard has served residents of the Thrifty and Fry communities for more than 100 years. The first person known to be buried at the site was infant Martha Blackwell, who died in 1864. However, a rock slab that bears an illegible name indicates the cemetery was used as early as 1862. Others buried in Mud Creek Cemetery include pioneer settler Charles Mullins (1790-1880) who brought his family to the area in 1858, victims of Indian attacks, and persons involved in the 1926-27 area oil boom. (1983)

Marker Title: Thrifty
City: Brownwood vicinity
Year Marker Erected: 2001
Marker Location: 10 miles northwest of Brownwood on SH 279, then 2.7 miles west on FM 2492 right-of-way at junction with county road 105.
Marker Text: Once a thriving agricultural area and regional trade center, the community of Thrifty was established after the U.S. Army relocated Camp Colorado, a frontier defense post, along nearby Jim Ned Creek in 1857. The first family to settle permanently in the area was that of Charles Mullins, whose three sons and one daughter and their families established ranches and homes in the Jim Ned Creek valley. Once federal troops were withdrawn from the area after Texas voters elected to secede from the Union in February 1861, settlers were on their own to provide for their defense, encountering many of the dangers of frontier life. Thrifty saw its greatest development in the period following the Civil War and Reconstruction, when a post office was established (first under the name Jim Ned, later named Thrifty). John Charles Mullins donated four acres of land for school and church purposes in 1881. At one time, Thrifty had a hotel, saloon, sawmill, sorghum press, cotton gin, blacksmith shop and physicians' offices. The mercantile store, operated by Dr. G.W. Allen and John Charles Mullins, served as a regional trading center for farmers and ranchers in the area. In 1886, the railroad bypassed Thrifty, and its life as a vital trade center diminished. This event, coupled with a severe drought between 1885 and 1888, triggered an exodus from the community, as residents sought viable employment elsewhere. The story of Thrifty remains as a lesson in the development of the Texas frontier and a part of Brown County's history. (2001)

During the Spring of 1875, while Wm. Bobo, Wm. Crockett and Forrest Spillers, who lived near Milbourne in McCulloch County, were cow hunting in Brown County about five miles south of Brook Smith, they discovered an Indian spy among the rocks about 200 yards away. Forrest Spillers was murdered by this Indian. Spillers was the last person killed by Indians in Brown Co.

Note: Author interviewed T.W. Clark; M.R. Cheatham and John Beasley, who lived in that section at the time.

During 1866, Grandpa Casin, who was eighty years of age and lived with his son, Hen. Casin on Jim Ned in the western part of Brown County. This elderly pioneer had gone to split a few rails. Since he failed to return for his noonday meal, a search was made and Mr. Casin was found where he had been murdered and scalped by the savages. The Indians made a cross with an arrow on his breast.

Note: Author interviewed W.W. Hunter and W.E. Gilliland, who lived in this section at the time.