During 1862, James Tankersley lived in the frontier town of Comanche and James Carmeans lived at old Cora, a former county seat of Comanche County. During the preceding winter, Mr. Tankersley had cured about four thousand pounds of meat and thinking, perhaps, he could sell some of his product at Camp Colorado and Camp Collier in Brown and Coleman Counties, in company with James Carmeans, went to those two camps for that purpose. James Tankersley and James Carmeans, after spending the night at Camp Collier on Clear Creek in the southwestern part of Brown County, were planning to return home alone, but were told by Lt. Christian that an ambulance would soon be traveling the same way, so they had better wait for it was unsafe to travel alone. But they stated, "We shall ride along slow. The ambulance will soon overtake us."

After going six or seven miles, Tankersley and Carmeans were ambushed by fifteen or twenty Indians. Carmeans was evidently killed first and Tankersley, who was later forced to make a stand, seemed to have fought a desperate fight. This was shown by the surrounding trees. After he had exhausted practically all of his ammunition, it seems he crawled to the body of his companion and fired his guns at the savages. But Tankersley, too, finally succumbed to the deadly fire of the savages.

Shortly afterwards, Pat Gallagher and Crockett Large, who heard the firing and who were already alarmed, saw a lone savage in the road. They knew this was only a trap and that other Indians were ambushed nearby. Riding excellent horses, they hurriedly started with the news toward Camp Collier. When Gallagher and Large had gone only about three or four hundred yards, they came upon the bodies of Tankersley and Carmeans, but hurried on and in a very short distance, met the ambulance. After reporting what had occurred, the two frontier citizens rushed to the camp to report the news to the rangers. Both Tankersley and Carmeans were stripped and scalped and as usual, one sock was left on the left foot.

Another peculiar trait of an Indian is that he is almost invariably fond of red hair. Since James Tankersley was redheaded and had a red beard, the Indians removed both his scalp and beard. James Tankersley and James Carmeans were buried by the Rangers near live oak trees about one hundred and fifty yards north of Camp Collier.

Lt. Wm. Pogue and about thirty rangers overtook the enemy late in the afternoon, a short distance west of the present town of Abilene. A running fight followed with the savages in the lead. Since the Rangers' horses had been exhausted during a hard day's drive, the Indians soon ran away from the Rangers. But during the fight, at least one Indian was killed. 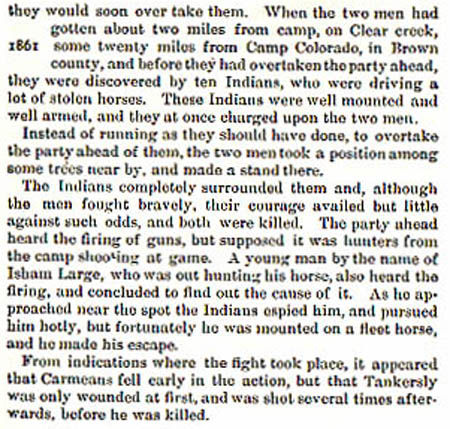