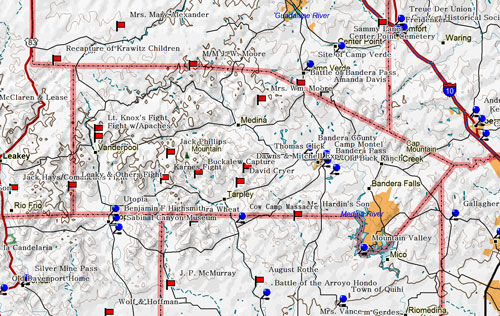 Marker Title: Bandera Pass
City: Bandera vicinity
County: Bandera
Year Marker Erected: 1936
Marker Location: From Bandera, take FM 689 north about 10 miles to intersection with Highway 16 - marker is on 173 r-o-w at intersection.
Marker Text: Celebrated Indian pass known from the earliest days of Spanish settlement. Identified with many a frontier fight and many a hostile inroad. Old Ranger trail from the Medina to the Guadalupe River and the United States Army route between frontier posts followed this route through the mountains. More

Marker Title: Camp Montel, C.S.A.
Address: 504 Main St.
City: Bandera
County: Bandera
Year Marker Erected: 1964
Marker Location: courthouse grounds
Marker Text: Site 25 mi. West on Hwy. 470, 1 mi. South. Established 1862 as part of Red River-Rio Grande defense line. Named for Captain Charles DeMontel, surveyor and colonizer of Bandera, leader of county defenses. Occupied by troops of Texas frontier regiment who furnished their own guns and mounts but often lacked food, clothing and supplies. In 1860 Bandera County's population was 399. Although all the men were needed to defend the county from Indians, many joined the Confederate and State troops. Some went to protect the Texas Coast from Union invasion. Many were assigned to defend the frontier in this region. Scouting parties and patrols managed to effectively curb Indian raids until war's end. Texas had 2,000 miles of coastline and frontier to defend from Union attack, Indian raids, marauders and bandits from Mexico. Defense lines were set to give maximum protection with the few men left in the state. One line stretched from El Paso to Brownsville. Another, including Camp Montel, had stations a day's horseback ride apart from Red River to Rio Grande. Former U.S. Forts used by scouting parties lay in a line between. Behind these lines and to the east organized militia, citizens' posses. 1964

Marker Title: Captain Jack Phillips
City: Bandera
County: Bandera
Year Marker Erected: 1970
Marker Location: Corner of Main Street and Pecan Street, facing courthouse square, Bandera.
Marker Text: A Bandera County Deputy Sheriff, Capt. Jack Phillips, set out alone on Dec. 29, 1876, on an official visit to Sabinal Canyon. Indians attacked him at Seco Canyon Pass, 22 miles southwest of Bandera. Phillips raced for the nearest settlement. When his horse was shot from under him, he ran for half a mile before being killed. A mail carrier and a couple on their way to the county seat to be married found his body later that day. Ironically, the Indians had been trailed for many miles by Texas Rangers who had turned back in exhaustion just before Phillips was waylaid. (1970, 1975)

Marker Title: Old Texas Ranger Trail
City: Bandera
County: Bandera
Year Marker Erected: 1968
Marker Location: Corner of Main Street and Pecan Street, facing courthouse, Bandera.
Marker Text: This winding, 100-mile trail from San Antonio to Kerrville was, during the 19th century, a strategic patrol road traveled by Texas Rangers to protect the surrounding area from hostile Indian attacks. During uneasy pioneer days roads such as this, regularly scouted by Rangers, helped promote early white settlement by strengthening frontier defense. Because Bandera was located midway on the trail and because Bandera Pass, 10 miles north, frequently harboNative American ambushers, the town became a focal point for Ranger activities along the road. Perhaps the best-known battle to occur on the old route happened in Bandera Pass in the spring of 1841. At that time a company of 40 Texas Rangers, under intrepid Indian fighter Capt. "Jack" Hays, was on a scouting mission in the Guadalupe Mountains. Halfway through the pass, they were suddenly attacked by several hundred wild Comanches who lay hidden in the brush and behind boulders in the narrow gorge. A bloody fight ensued, much of it hand-to-hand combat with Bowie knives; but after their chief was slain, the Indians withdrew and finally escaped. Thus the Rangers and this trail helped remove the Indian menace and open the frontier across Texas. (1968)

During 1873, Mrs. Wm. Moore, who lived at the Walker Place, on Laxon's Creek in Bandera County, started alone and afoot to the home of Mrs. Curtis, a neighbor, who lived about one mile away. But before she was hardly out of sight Mrs. Moore was lanced to death by the Indians. The citizens at the house could hear her screaming.