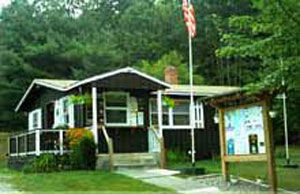 Fort Dummer State Park, located in the Connecticut River Valley, has 217 acres of forest land just outside of Brattleboro.

The park was named after Fort Dummer, the first permanent white settlement in Vermont. Built on the frontier in 1724, it was initially the gateway to the early settlements along the banks of the Connecticut River. Forty-three English soldiers and twelve Mohawk Indians manned the fort in 1724 and 1725. Later, the fort protected what was then a Massachusetts colony from an invasion by the French and Indians. Made of sturdy white pine timber, stacked like a log cabin, Fort Dummer served its purpose well.

The park overlooks the site of Fort Dummer which was flooded when the Vernon Dam was built on the Connecticut River in 1908. This site can be seen from the northernmost scenic vista on the Sunrise Trail. It is now underwater near the lumber company located on the western bank of the river.

Located in the southern foothills of the Green Mountains, the forest is more like those of southern New England than like a typical Vermont forest. Southern tree species such as white, red, and chestnut oaks, dominate the hardwood forest, which also contains beech, maple, yellow birch, and white birch.

An abundance of oak trees provides food and shelter for gray squirrels, turkeys, and deer. Ruffed grouse also inhabit these woods, attracted by its dense woody cover and open understory.

The campground has 51 tent/trailer sites and 10 lean-to sites. These are located in two adjacent areas and are served by two toilet buildings, both with hot showers ($). There is a sanitary dump station, but no hookups. Also located within the park are a small picnic area, hiking trails, a play area, and a large open field.