Following the signing of the Treaty of Greenville in summer 1795, relative peace prevailed between the white settlers and the natives of the Old Northwest. The Washington and Adams administrations at least paid lip service to the terms of the treaty, but Jefferson (the great agrarian philosopher) sought additional lands for American farmers through a series of purchases from the tribes. Not all the frontiersmen bothered with the niceties of treaties and simply occupied Indian lands illegally. 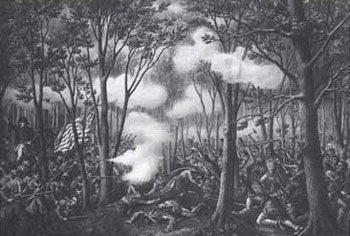 The American flag can be seen flying as Gov. William Henry Harrison leads his troops against the Indians of the upper Wabash Valley during the Battle of Tippecanoe. Photo from the book, Encyclopedia of American Indian Wars by Jerry Keenan.

Not without reason, resentment among the tribes ran high. In 1808, Tecumseh, a Shawnee chieftain, and his brother Tenskwatawa (known to the Americans as The Prophet) launched a reform movement among their people. They attempted to end the sale of additional lands to the whites and to resist alcohol and other troublesome temptations of the competing culture. A new native settlement was built at the confluence of the Wabash and Tippecanoe rivers (north of present-day Lafayette, Indiana) and became known as Prophet’s Town. The village became the focal point of Tecumseh’s effort to rally the tribes east of the Mississippi River in the hope of halting the spread of white settlements.

William Henry Harrison was governor of the Indiana Territory and superintendent of the Northwest Indians. Fearing the growing strength of Tecumseh’s confederacy, Harrison decided to strike quickly. He marched an army of 1,100 men along the Wabash toward Prophet’s Town. he ordered a fort constructed a few miles south of the "Ten O'Clock Treaty Line" to protect the capital of the Indiana Territory, at Vincennes. The site, located in present-day Vigo County, Indiana, at the northern edge of Terre Haute, was said to be the location of a historic battle involving the Illinois Indians. Major Joseph Hamilton Daviess proposed that the stockade be named Fort Harrison in General Harrison's honor. Leaving the fort under Colonel James Miller (general), Harrison led his army to the Tippecanoe battleground, where it confronted an army led by the Shawnee Prophet. 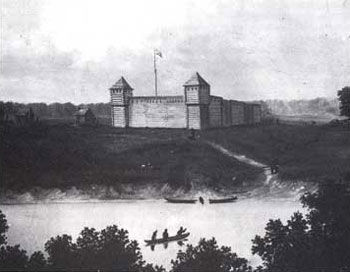 Photo of Fort Harrison from the book,
Encyclopedia of American Indian Wars, by Jerry Keenan.

Tecumseh was temporarily out of the area on a recruiting venture among the Creeks in the south, but his brother prepared the men for battle with fiery oratory-including promises that they could not be harmed by the white men’s bullets. Shortly before dawn on November 7, 1811, Harrison’s soldiers were attacked. After a two-hour battle, the natives were forced to flee and their village -the gathering spot of the confederacy -was destroyed. Some military historians regard the Battle of Tippecanoe as a draw, but note that it held important ramifications:

* The safety of the white settlements in the Indiana Territory became markedly improved.

* The Prophet was discredited as a leader because of his inability to ensure the promised invincibility from the opponents' bullets and also because he had violated Tecumseh's earlier counsel to hold off any armed confrontation until his return.

* The confederation of the eastern tribes disintegrated.

* The bitterly disappointed Tecumseh, who did not return to Indiana for another three months, remained an implacable foe of the American settlers. He would later become allied with the British and participate in the War of 1812.

* William Henry Harrison emerged with a reputation as the hero of Tippecanoe, an image that he would use to his political advantage in later years. More 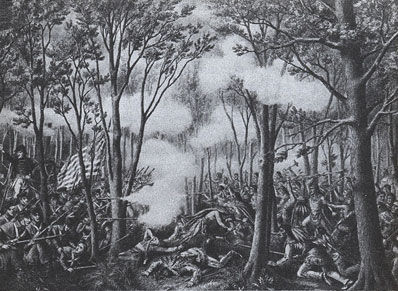 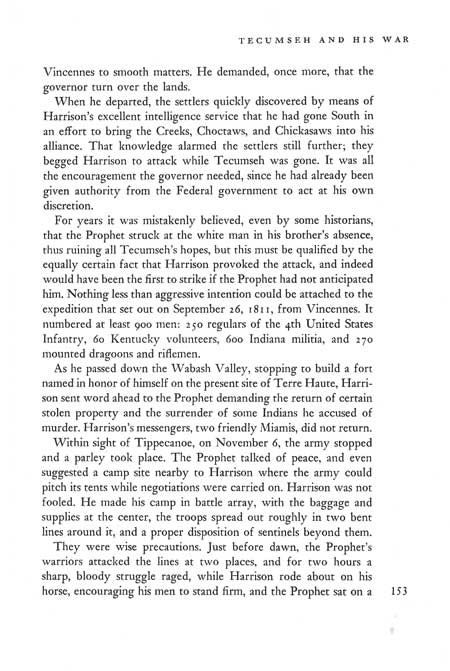