The Pequot War was fought in 1637. It involved the Pequot Indians and the settlers of the Pilgrim Colony and the Massachusetts Bay Colony. The Pequot were a powerful tribe, their only serious rival the Narragansett.

This war was the culmination of numerous conflicts between the colonists and the Indians. There were disputes over property, livestock damaging Indian crops, hunting, the selling of alcohol to Indians, and dishonest traders. Besides these, the Colonists believed that they had a God given right to settle this New World. They saw the Indian as savages who needed to be converted to their way of God. Unfortunately, the colonists felt superior to all Indians even those who became Christian. The Indian was in a difficult situation. He constantly suffered at the hands of the colonists, yet at the same time was growing more dependent on the Colonists trade goods. The Indians were also disturbed at the encroachment of their lands by the colonies.

Two events weakened the Pequots prior to their war with the English. In 1631 the tribe was divided into pro-English and pro-Dutch factions. This problem was not solved when the tribes leader, Wopigwooit, died in that year. Two sub-sachems, Sassacus who was pro-Dutch and Uncas who was pro-English, fought to succeed as the grand sachem. The tribe picked Sassacus. Uncas and his followers continued to quarrel with the pro-Dutch group. Eventually, Uncas and his followers fled to form their own tribe, the Mohegan. The Mohegan became hostile to the Pequots.

The second event that weakened the Pequots was the smallpox epidemic which they suffered in 1633-34. The separation of the Mohegan and the smallpox cost the Pequots almost half of their people.

The suffering of the Indians reached a breaking point on July 20, 1636. On that date, the Pequot's killed a dishonest trader, John Oldham. Many settlers demanded that the Pequot's be punished for this transgression. Massachusetts raised a military force under the command of John Endicott. This troop of 90 men landed on Block Island and killed 14 Indians before they burned the village and crops.

Endicott then sailed to Saybrook where they demanded tribute from the Pequot village there. This was the first indication Connecticut had that the Massachusetts Bay Colony was fighting the Pequots. The Pequots managed to flee their village at the approach of the Massachusetts troops who then burned their village. Endicott then left, leaving the Connecticut troops at Fort Saybrook to feel the wrath of the Pequots, who attacked anyone trying to leave the fort.

On May 26, 1637, a military force under John Mason and John Underhill, attacked the Pequot village located near New Haven, Conn. The village was destroyed and over 500 Indians killed. The Pequot leader, Sassacus, was captured on July 28. Many of Sassacus' tribesmen were captured during the war. The captives were sold in the West Indies as slaves. Sassacus was executed by the Mohawks, a tribe that fought on the side of the English. The few Pequots who were able to escape the English, fled to surrounding Indian tribes and were assimilated. The Pequots, once a powerful Indian nation, was destroyed.

The war began with a naval engagement in the summer of 1636 when John Gallup was fishing off Block Island and discoveNative Americans escaping by canoe from a pirated vessel that he recognized as a neighbor's. He attacked what turned out to be Pequots, killing a few and taking the rest prisoner.

John Mason led an army of eighty white men and one hundNative Americans against the Pequots on May 20th, 1637.

The following is from the book, The American Indian Wars, by John Tebel & Keith Jennison. 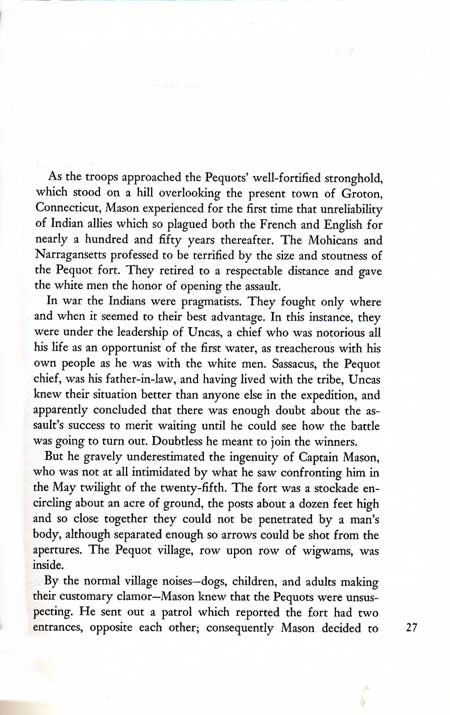 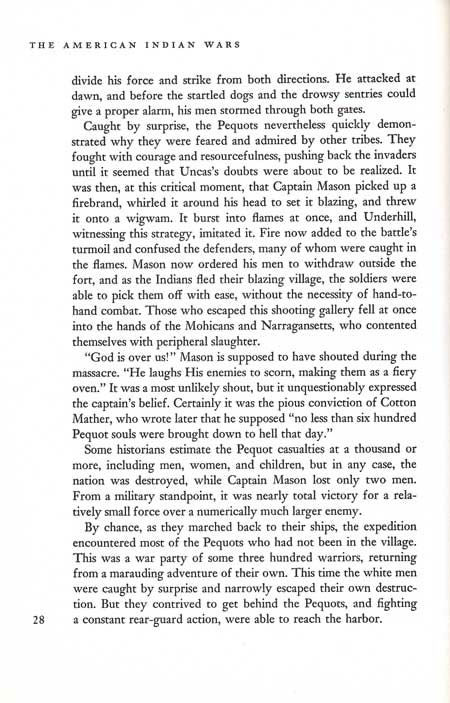 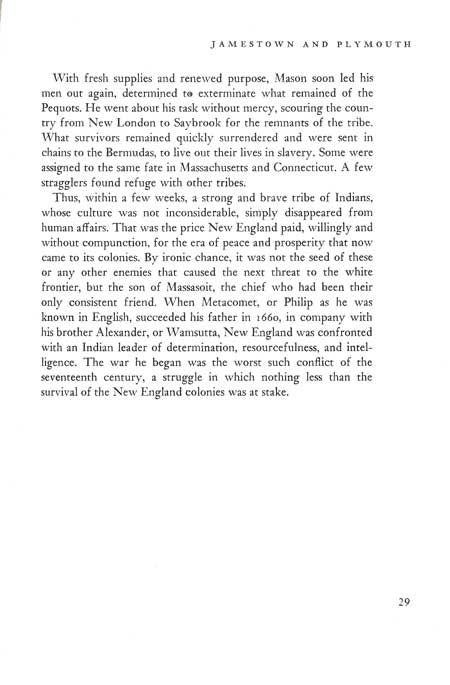