Pontiac was a powerful orator as well as warrior, and possessed a keen intelligence and skill as a strategist. He believed that the French would back up an Indian revolt to reclaim the forts and restore the former relationship with the tribes. Croghan, the Indian agent, heard of the meeting and reported it to Amherst, who ignored it and continued his policies. Throughout the winter, Pontiac gathered support. On April 27, 1762, he called a council of more than 400 Ottawa, Huron, and Potawatomi chiefs and warriors. 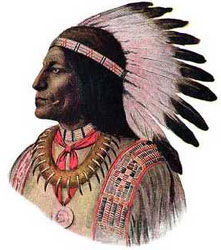 Echoing a prophet of the Delaware Nation, he talked of the wrongs they had suffered under the British and spoke of the Master of Life and his urging for the Indians to turn back to their old ways. Unlike the Delaware prophet, Pontiac did not advocate a return to the primitive ways before guns or powder, but to the days of French control of the region. The warriors embraced the idea, and Pontiac announced his plans to take the fort at Detroit. After the capture of Detroit, others would follow. Spain had entered the war between France and England on the side of France, and the new world French who still controlled the Louisiana and Mississippi River region were rumored to be hoping to reclaim the Great Lakes forts that Canada had capitulated. It was hoped the French troops would rise up and join the Indian rebellion to oust the British.

Four days later, under the ruse of performing a ceremonial dance, Pontiac and 50 of his braves entered the fort and sized up the opposition. The stage was set for the attack. He informed the post commander, Maj. Henry Gladwin, that he and his men would be back in a few days for a good-will council, the plan being that he would enter the fort officially with his braves and the rest of the adults of the tribes would walk into the fort after him, carrying concealed knives, tomahawks and sawed-off muskets under their blankets. At his signal, they would cast off their blankets and attack the soldiers of the fort. The Hurons and Potawatomi would seize the English outside the fort and ambush any English ships on the river. 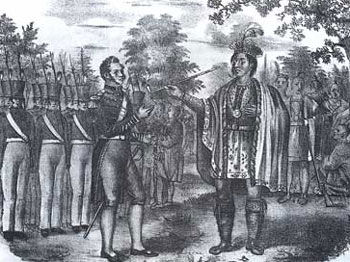 Meeting of Pontiac and his embassy with
Major Rogers and his troops. Photo from the book,
Encyclopedia of American Indian Wars, by Jerry Keenan.

Somehow, Gladwin caught wind of the plan. One romantic theory holds that a woman of the tribe, in love with Gladwin, passed on Pontiac's plan in order to save Gladwin's life. The fort, largest and strongest in the western reaches of European influence, was home to 130 soldiers and almost half that many English traders. There were two 6-pound and one 3-pound cannons, and three mortars. The schooner Huron was anchored in the river, with six guns, as was the Michigan.

On May 7, 1763, Pontiac led his warriors to the fort. That the soldiers were prepared and expecting an attack was obvious. Pontiac knew his men would be overpowered and did not give the attack sign. He left with his warriors, withdrawing to the Ottawa village. On May 9, Pontiac returned with 65 canoes. Told by Gladwin that only a few of his chiefs could enter the fort with him, Pontiac regrouped across the river. Furious with Gladwin, he ordered his men to attack and kill any English outside the fort but to spare the French, who he believed would side with him against the English. Pontiac's war had begun. 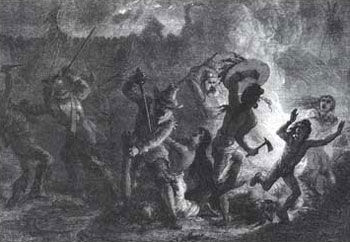 Massacre of the St. Francis Indians by Rogers's Rangers in the French and Indian War. Photo from the book, Encyclopedia of American Indian Wars by Jerry Keenan.

He ordered the Hurons and Potawatomi to intercept any Englishmen coming toward the fort, and he sent out war belts to tribes throughout the Ohio Valley and Great Lakes region, hoping to enlist other tribes in his uprising. After the initial attacks in which they killed nine and captured many prisoners, the Indians encircled the fort, kept at some distance by the English guns.

The French "habitants" had been solicited to provide the tribes with food and supplies, with the promise that they would not be harmed and that French soldiers would come to help the Indians retake the forts. Pontiac won their support, paying them with promissory notes written on birchbark and signed with his totem, the otter. He sent three of them to appeal to Gladwin for a council with the Ottawa chief. When Gladwin agreed and sent two officers to Pontiac, they were seized as hostages, and Gladwin resolved to defend the fort to the last man. Pontiac resolved to force him to do just that. More 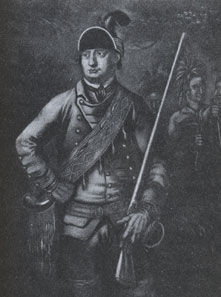 The following is from the book, American Indian Wars, by John Tebbel & Keith Jennison. 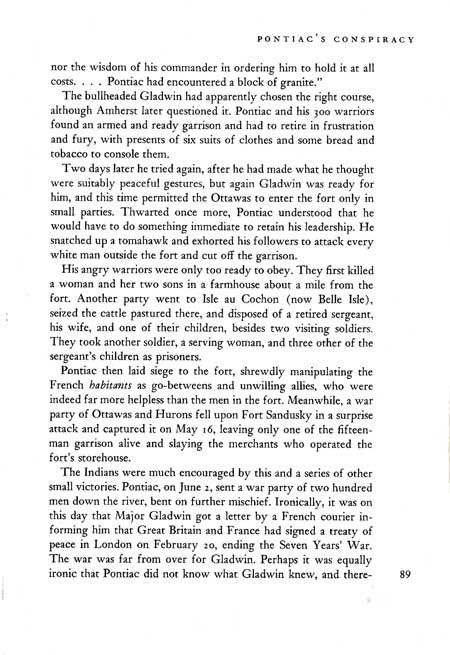 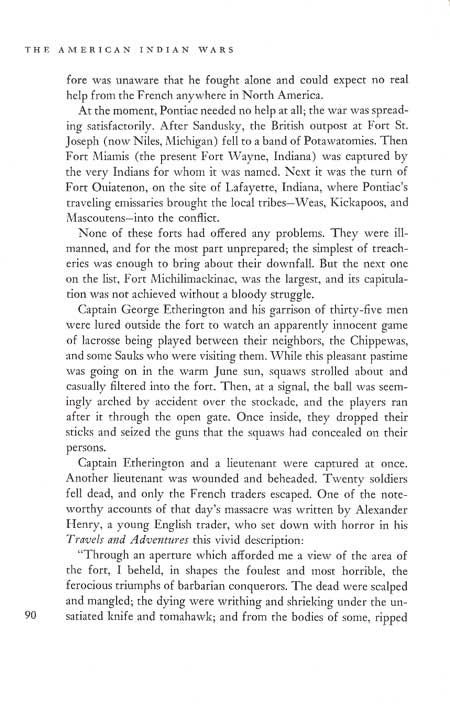 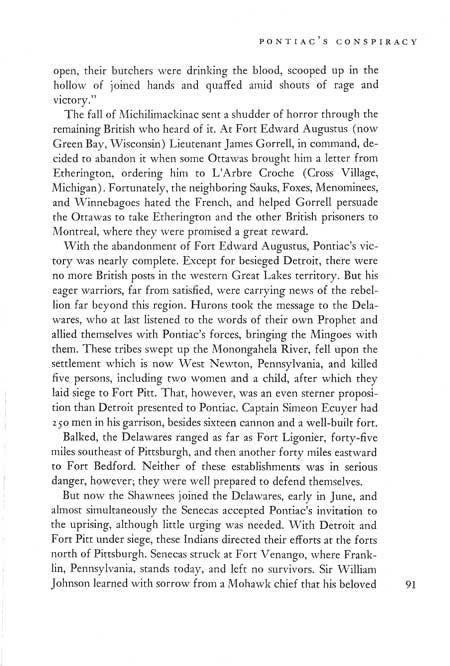 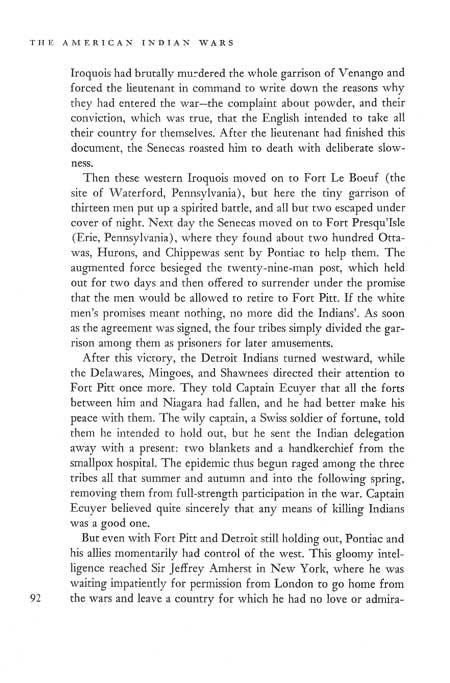 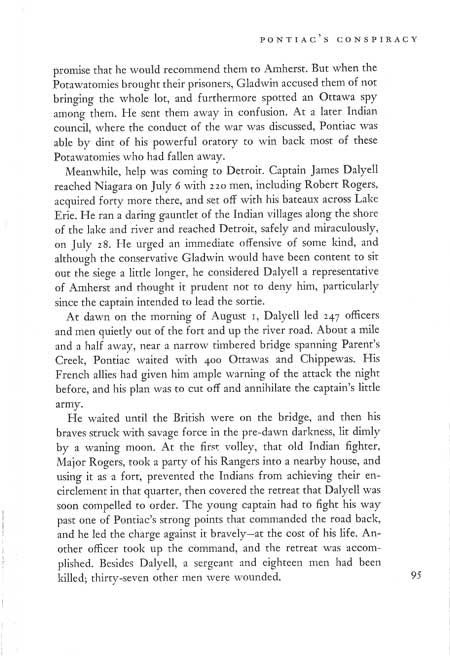 Pontiac's men recovered Dalyell's body, cut out his heart, and wiped their prisoner's faces with it. They then hacked off his head and stuck it on a pole and probably featured a British soldier as an entree at a feast that they threw for some French settlers. On August 5, a rescue party under Henry Bouquett fought Delawares and Shawnees twenty-six miles east of Pittsburgh near Brushy Run. 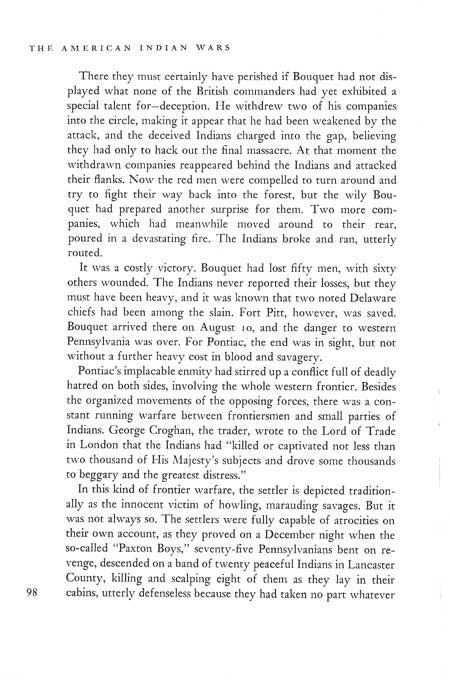 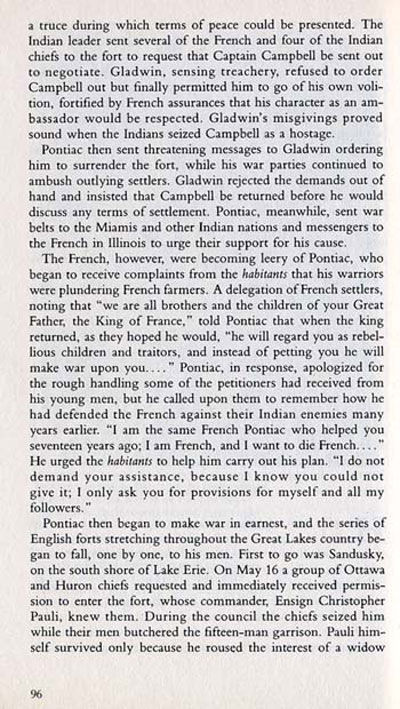