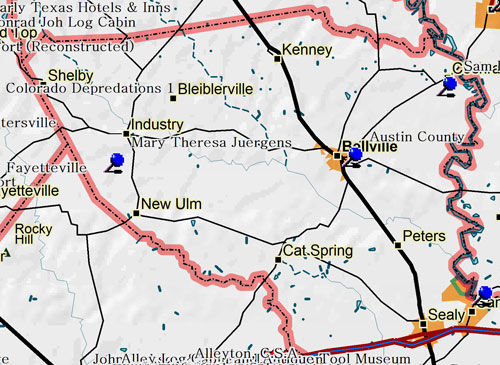 Marker Title: Austin County
City: Bellville
County: Austin
Year Marker Erected: 1936
Marker Location: on SH 36 at south side of junction with SH 159, Bellville
Marker Text: A part of the grant to Stephen F. Austin in 1821, created a municipality under the Mexican government in 1828, became a county of the Republic of Texas, March 17, 1836. Named in honor of Stephen Fuller Austin, 1793-1836, pioneer empresario, founder of Anglo-American Texas. San Felipe de Austin, capital of Austin's colony, 1824-1836, seat of provisional government of Texas, 1835-1836. County seat, 1837-1848, Bellville, since.

Marker Title: Stephen F. Austin
City: San Felipe
County: Austin
Year Marker Erected: 1936
Marker Location: Stephen F. Austin State Park, P38 off of FM 1458, San Felipe.
Marker Text: Stephen F. Austin, Father of Texas, November 3, 1793-December 27, 1836. He planted the first Anglo-American colony in Texas, "The Old Three Hundred". In his several colonies he settled more than a thousand families. He was from 1823 until 1828 the actual ruler of Texas and thereafter its most influential leader. His own words are a fitting epitaph: "The prosperity of Texas has been the object of my labors -- the idol of my existence -- it has assumed the character of a religion -- for the guidance of my thoughts and actions" -- and he died in its service. No other state in the union owes its existence more completely to one man than Texas does to Austin. Erected by the State of Texas 1936 with funds appropriated by the Federal government to commemorate one hundred years of Texas independence.

Marker Title: Sam Houston's Camp West of the Brazos
City: Bellville vicinity
County: Austin
Year Marker Erected: 1990
Marker Location: from Bellville take SH 159 northeast about 9 miles, then take County road (right) southeast about 2 miles (Private Poss. underwater)
Marker Text: (March 31-April 13, 1836) At the end of March 1836, following the defeat of Texan forces at the Alamo and at Goliad, the retreating Texas army led by Gen. Sam Houston encamped at this site. While in camp here Houston's forces were reorganized and received much needed reinforcements and supplies, including the "Twin Sisters," a pair of cannon. After training his soldiers here for two weeks, Houston led them across the river in pursuit of the Mexican army, which they engaged and defeated on April 21 in the Battle of San Jacinto, the final battle of the Texas Revolution. (1990)

Marker Title: Mary Theresa Juergens
City: New Ulm vicinity
County: Austin
Year Marker Erected: 1992
Marker Location: from Industry, take FM 109 south about 2.4 miles then go west on Track Rd. from New Ulm, take Track Road 3.5 northwest, out west of FM 109
Marker Text: (1809-October 31, 1891) German natives Conrad and Mary Theresa Hennecke Juergens came to Texas in 1833, the year of their marriage, and built a cabin near this site. In March 1836 as the Texas Revolution was raging, many Texas settlers, in fear of the advancing Mexican army, fled their homes in what became known as the Runaway Scrape. The Juergens family chose to remain, but soon were victims of a raid by Indians, thought to be members of the coastal Karankawa tribe. Conrad Juergens was wounded, and Mary and two of Conrad Juergens' young sons from a previous marriage were captured. Pregnant at the time of her kidnapping, Mary gave birth to a girl, Jane Margret, while in captivity. Months later, mother and daughter were ransomed at Coffee's Trading Post on the Red River, suggesting they were traded by the Karankawas to a nomadic tribe. The Juergens' sons were not rescued. Mary and Jane returned to Conrad, but he died within two years. After a brief second marriage to George Grimes, Mary married Samuel Redgate in 1843. They moved to Dayton, Ohio, where Mary died in 1891. Redgate and Jane Margret returned to Texas and settled in Parker County, where in 1936 the State of Texas erected a monument at their graves to honor them and Mary. (1992)

Marker Title: San Felipe de Austin
City: San Felipe
County: Austin
Year Marker Erected: 1964
Marker Location: FM 1458 right-of-way, San Felipe
Marker Text: First Anglo-American capital of Texas. Came into being on July 26, 1828, as capital of the Austin Colony, by decree of the Mexican government. Father of Texas Stephen F. Austin had begun under the 1821 grant from Mexico the settlement of more than 1,000 families. The original colony ran from the coast on the south to the old San Antonio Road on the north, and from the Lavaca River on the west to the San Jacinto River on the east. In this first American town in Texas lived Austin, William Barret Travis, Sam Houston, David G. Burnet and Jane Long. All settlers crossed its threshold for land grants. After the organization of other colonies, this continued to be the recognized center of Texas. It was capital of the Mexican Department of Brazos, site of the Conventions of 1832 and 1833 and the Consultation of 1835 where Texans aired grievances and tried to reach understanding with Mexico. The provisional government created with Henry Smith as governor in 1835 functioned here until it gave way to the convention declaring Texas independent of Mexico on March 2, 1836. (1964)

Marker Title: Early Roads to San Felipe
City: San Felipe
County: Austin
Year Marker Erected: 1969
Marker Location: Stephen F. Austin State Park, Park Road 38 (off FM 1458), San Felipe
Marker Text: During the mid-1820s, when Stephen F. Austin was founding this town, the only roads in the area were wagon ruts of beaten trails marked by notched trees. Within a decade, however, the village of San Felipe, one of the first Anglo settlements in Texas, had become a hub from which 8 or more roads projected. Many of these were small, intra-colony routes, but the main trails extended to major towns or joined "highways", such as the San Antonio Road (El Camino Real). A main route, which passed through San Felipe, was the Atascosita Road, connecting Goliad with the United States. It took its name from Atascosa (Spanish for "boggy") Spring near Liberty, which once was its main terminus. The Gotier Trace, another travel artery, was laid out about 1830 by pioneer James Gotier. It joined the northern and southern parts of Austin's colony and was used for decades. The San Felipe Road proper, which ran to Harrisburg, transported goods inland from the Gulf Coast. Even the main thoroughfares, however, were dusty trails in the summer and impassable quagmires in the winter, often flooded by knee-deep water. Not until well into the 20th century did Texas begin to develop her present, outstanding highway system. (1969)