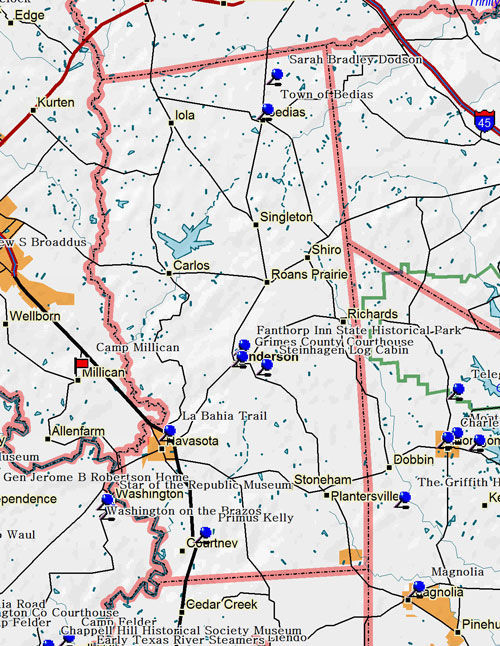 Marker Title: Town of Bedias
City: Bedias
County: Grimes
Year Marker Erected: 1968
Marker Location: Cooper Park near downtown Bedias on FM 1696.
Marker Text: Named for North and South Bedias creeks, which in turn were named for the Bidai Indians, an agricultural people reputed to have been the oldest inhabitants of the area. "Bidai" means "brushwood", which may refer to the building material used in their dwellings. The first white settlement in this vicinity was founded 1835 by Thomas P. Plaster, and for a while it was called Plasterville. In 1903, the community of "Old" Bedias surrendered most of its population to "New" Bedias after a branch of the International & Great Northern Railroad was built to the northeast. Townspeople from Pankey and Cotton also moved here. The name "Bedias" was retained, but only after a heated struggle in which determined citizens refused to have the town named for a railroad official. A famous, early resident of the Bedias area was Sarah Dodson, who in 1835 made the first "Lone Star" flag in Texas. She lived here from 1844 to 1848 and is buried in Old Bethel Cemetery, seven miles west. One of the most unique features of this region is the large number of Tektites (also called "Bediasites") found here. These are beautiful, glassy, meteor-like stones which fell to earth 34 million years ago. Amazingly, Indians called them "jewels of the moon."

Marker Title: Sarah Bradley Dodson
City: Bedias
County: Grimes
Year Marker Erected: 1986
Marker Location: From Bedias take SH 90 N approximately 4 miles to roadside park.
Marker Text: Born in Kentucky in 1812, eleven-year-old Sarah Bradley and her parents arrived in Texas in 1823 with Stephen F. Austin's old three hundred colonists, settling near Brazoria. Sarah married Archelaus Bynum Dodson of nearby Harrisburg on May 17, 1835. As tensions mounted between Mexico and the Texian colonists, a call for military volunteers was circulated in September 1835, and Archelaus Dodson became First Lt. in Captain Andrew Robinson's Harrisburg Volunteers. Sarah offered to design and make a flag for her husband's company. Using blue, white, and red calico, she fashioned a flag of three equal squares, with a five pointed white star in the center of the blue square. Reportedly the first Lone Star flag, the banner was displayed in the town of Gonzales in October 1835, and in December flew during the Siege of Bexar. When the Declaration of Independence was signed, two flags were seen flying over Convention Hall. One was described as a Lone Star flag and is believed to have been the one made by Sarah Dodson. Following the Texan victory at San Jacinto, the Dodsons lived in Fort Bend County, then moved in 1844 to Grimes County. They donated the land for Bethel Cemetery (5 mi. N) where Sarah was buried in 1848. Texas Sesquicentennial 1836 - 1986

Marker Title: Primus Kelly
City: Navasota
County: Grimes
Year Marker Erected: 1965
Marker Location: From Navasota take SH 6 S approx. 12 mi. to roadside park.
Marker Text: A faithful African slave. Came to nearby Courtney, Grimes County in 1851 with his master, John W.S. West from North Carolina. West was a prominent and wealthy pioneer planter and landowner. At the outbreak of the Civil War, West sent Kelly "to take care" of his three sons-- Robert M., Richard and John Haywood-- who joined the famous Terry's Texas Rangers, where they served with distinction. Kelly was not content "to wait on" his charges but joined them in battle, firing his own musket and cap and ball pistol. Twice Kelly brought to Texas the wounded Richard, twice took him to the front again. After war, bought a small farm near "Marse Robert", raised a large family and prospered. Died in 1890s. The courage and loyalty of Kelly was typical of most Texas African slaves. Hundreds "went to war" with their masters. Many operated the farms and ranches of soldiers away at war, producing food, livestock, cotton and clothing for the Confederacy. Others, did outside work to support their master's families. They protected homes from Indians, bandits and deserters and did community guard and patrol duty. At war's end, most slaves, like Primus Kelly, became useful and productive citizens of Texas.

Marker Title: La Bahia Trail
City: Navasota
County: Grimes
Year Marker Erected: 1967
Marker Location: Near the intersection of La Salle (Bus. SH 6) and Bruce St. in Cedar Creek Roadside Park; Navasota.
Marker Text: Originally an Indian trail through Southern Texas and Louisiana; known to Spanish explorers as early as 1690, when the De Leon Expedition passed this site on the way from Mexico to East Texas. With 115 men, 721 horses, 82 loads of flour, and other supplies, Alonso de Leon, Governor of Coahuila, and Father Massanet, a Franciscan priest, entered the wilds of Texas. The purpose of the expedition was to discourage French encroachment from the north, as well as to explore, colonize, and Christianize the Indians. They followed the rugged trail from the present town of Refugio to Goliad and continued northeast to Navasota, probably following Cedar Creek through this town. Then they journeyed north until reaching the Neches River, where (near present Weches) they founded the Mission of San Francisco de Los Tejas. The church was called after the Tejas, or "Friendly" Indians, whose name was eventually given to the entire state. Although de Leon's party went no farther on the western section of the trail, known as Atascosito Road, the eastern section extended into Louisiana. In nineteenth century, the route gained importance as a cattle trail, the Opelousas Road, that moved Texas herds to market in the north and east.