Back up near Jermyn, several miles east of 1199, in 1864, a handful of cowboys were looking for strays at Wynn Hill when they were attacked by Indians and forced to take refuge in the timber. Milton Wynn was mortally wounded; B. L. Ham and Buck Sanders received permanent injuries from their wounds.

Bill Hollis, sometimes called Bill Clark, was attacked at his ranch about eleven in the morning, 1873. He threw open the door and shot a warrior in the stomach, causing the others to retreat.

West of 1199, Captain Ira Long and his men attacked a band of Indians who had stolen some of their horses. The fight cost several of the Indians their lives.

West of 1199, in 1872, Frank Myers (Morris) also sometimes called the Jack of Clubs, was returning from Jacksboro with his marriage license when he was attacked and killed by Indians. He was engaged to Miss Mattie Crow, whose father and brother had been similarly killed over the last two years.

In 1865, Alf Ross, his fifteen-year old son and Shade Hightower were working their truck patch when Indians attacked the ranch. Mrs. Ross managed to gather the children in the house and close the door. The men were shot down in the field. While the Indians were busy elsewhere, Mrs. Ross took the children away from the ranch, stopping to pick up her husband's scalp. They hid in a cave overnight. She came back the next morning to find the Indians still there so she waited until dark then took her brood to her mother's place near the Lemley Ranch. Soon after they arrived, a little before midnight, they could hear gunfire coming from Kit Carter's Ranch nearby.

Further east on 1199, in 1859, John Bottorff had just left his home and headed to the mill in Weatherford when he was overwhelmed and killed by several dozen Indians. Uncle Billy Kutch witnessed the murder and scalping from a distance and chased the raiders as far as the Little Wichita River.

Jermyn is the last opportunity on this road trip to head north into the Red River road trip for a visit to Fort Sill. Just on the east side of Jermyn, 1191 continues north, past what was once the settlement of Gertrude. Gertrude's massacre is another name used for Cambren (Lost Valley) massacre. You will catch 281 to the northwest through the pastorial communities of Windthorst and Scotland and onto Wichita Falls where you can take Interstate 44 to Fort Sill in Oklahoma. The marker at Tenth Cavalry Creek can be found just west of 281 in Burkburnet.

The Falls at Wichita Falls

287 to the northwest through Quanah will lead you to Palo Duro Canyon near Amarillo. The summer months offer a nightly outdoor musical production in the canyon. Here Mackenzie's Raiders obtained the decisive victory over the combined tribes in the Red River War at the Battle of Palo Duro Canyon in 1874. Colonel Mackenzie was transferred to the Sioux/Cheyenne frontier where he personally accepted the surrender of Red Cloud and Spotted Wolf. He later served in the campaigns against the Apache and Ute in the west. 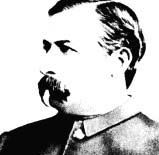 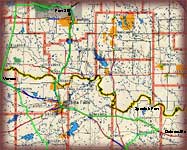