In 1871, Captain McAdams and son, David, were attacked but stood their ground against a handful of raiders, one of which was wounded during their retreat.

On June 26th, 1872, Indians chased and killed Chesley S. Dobbs on his way home from Palo Pinto. Several other ranches were hit, and a posse was formed to pursue the raiders. They were found at the Old Painted Camp near the mouth of Big Keechi. An attempt to surprise the warriors failed when one from the posse hollered too soon and scattered the band. Dobbs' scalp was found and recognized, enabling the citizens to locate his body.

Late in 1873, Al G. Crawford's horse was apparently stolen from Fortune Bend, and so he took a greenhorn named Valentine with him to search for the animal. He encountered Indian signs and decided to get a more trustworthy backup to continue his search. An experienced man named George Praiter volunteered, though he had to borrow a gun. Valentine was instructed to take him back to where they had seen the signs of the Indians. Crawford hurried off to get his son and meet them back at that spot. Valentine lost his nerve and could only point Praiter in the general direction. Praiter stumbled upon the Indians sleeping under a cliff and attempted to whistle an alert to Crawford and his son. He apparently woke one of the warriors, who walked out in the sun and stretched. Crawford saw him high above on the cliff and couldn't resist shooting him. The sound of the gunfire frightened Praiter, who thought it was the Indians attacking. But actually, they took the time to put on war paint and prepare for battle after picking up their fallen comrade. Eventually both sides met and fired until they ran out of ammunition and then retreated in opposite directions. Al Crawford was badly wounded and so was an additional warrior. Sheriff Thomas Wilson formed a posse and pursued the Indians' trail until he located and engaged them in a running fight for a few miles before the Indians broke away and escaped to Oklahoma.

This stop is as good a place as any to mention a few points of interest in the Possum Kingdom area. A sign at the top of the rise to the north will lead you to Observation Point, which offers a panoramic view of the lake. Across the lake to your left, you may be able to see a little of the golf course at the Cliffs (888-843-2543) www.thecliffs.com. This resort also offers splendid overnight accommodations and a good restaurant. The lake boasts several other recommended places: Lakeview Lodge (940-779-2522), which is a great place for catfish, and two RV parks, Hide Away Cabins (877-779-2333) and a KOA campsite at Willow Beach. 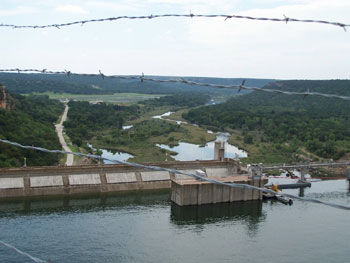 Allen "Alley Cat" Ince , the unofficial mayor of Possum Kingdom, can be found behind the bar at the Wildcatter Ranch except on Thursday nights when he moves over to their stage to entertain the crowd. If you fail to catch him, give him a call at 940-445-1694 for help in arranging fishing trips, boat rentals, parties, float trips as well as information about events in the music scene around the lake.

If you follow Hwy. 36 onto the west to the end of the peninsula, you will find Sand Beach. It's a good place to take off your shoes and get your feet wet. This drive offers some nice views to the north including a glimpse of Costello Island. Before there was a lake, the island had access across the river by ferry. The main building had been a rowdy roadhouse with a grill and bar and the second floor was crowded with bunk beds, dormitory style. My first memories were in the early fifties when the lake was there and the Jones' ran the place. As far as I was concerned the big attraction were push-up sherbert torpedos.

Waterskiing was a new phenomenon, and the slips were full of wooden Higgins and Centurys. Parents sat under the mesquites and visited while the kids ran about. But believe me, the place was not that tame. It was the end of World War II and we were still in the oil boom. The way people partied in those days has no resemblance to today's get-togethers in their smoke-free, white wine sipping environment. One night there, I saw a drunken ex-army pilot bet that he could land his Bonanza in such a way that a group of guys thought it would be worth $100 to watch him try it. He couldn't, and he stuck his nose into the island's runway, breaking off the prop and cutting his forehead in the effort. Within an hour of the incident, the gambling action had turned into an arm wrestling contest that resulted in a bone sticking out of the loser's forearm.

If you look across the lake from Sand Beach to the northwestern shore, you will see the site of the old Johnson Ranch. Jimmy Stewart, the movie star, was part-owner and though I never saw him, there was plenty else to see. Camels, lions and zebras were on the grounds, and I recall elephants and hippopotamus' but the place had a dreamlike quality to a little boy. I returned there in the late seventies interested in brokering or developing the property, and the estate looked "more real." The game room had a shuffle board with elephant tusks. There were dozens of other trophies on the wall including a rhinoceros, which could have been my "hippo," and thus a better explanation of my earlier memories.

There were skeet and trap shooting facilities nearby as well as underground pigeon traps, proof the place had witnessed high stakes contests. That kind of action attracted all sorts of celebrities to North Texas. While in grade school, I got to meet John Wayne, Dan Blocker, Lorne Greene and Dale Robertson. Likewise, plenty of sports stars were regulars on the scene including Bobby Lane and Dizzy Dean, but the best stories still told involve a sort of underground celebrity, professional gambler Titanic Thompson. A gifted natural athlete, he won several fortunes with horseshoes, golf clubs and shotguns but preferred a straight up con. He bet a group of badly stung Wichita Falls golfers he could throw his bag of clubs over the three-story, gabled clubhouse. He agreed to give them until next morning to raise more cash. That evening, the football coach brought his strongest and beefiest linemen to the club to attempt the feat; no one could get a bag halfway there. The confident locals laid down their money then stood in amazed horror as Thompson let out his 30-foot shoulder strap and began to accelerate his circular motion until he lofted the bag sling-style 50-feet in the air, easily clearing the building. 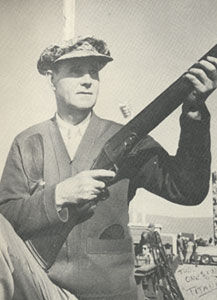 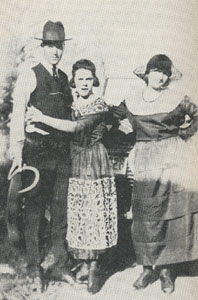 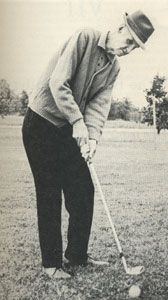 The sprawling ranch house sat on nearly six hundred acres and had a big boathouse with the ranch's old blonde wood Chris Craft cabin cruiser. Scuba diving had also become a popular activity thanks to Lloyd Bridges. PK is well over one hundred feet deep and mostly limestone, therefore exceptionally clear (beyond forty feet before the lake turns over.)

Near the beginning, Scuba Point was open near the dam where air could be bought and gear could be rented. Soon after the shop opened, they held a spearfishing contest, but the crowd that showed up in the ranch's cabin cruiser were turned away because they had failed to pre-register. They vowed they would return the next year and show everybody a thing or two. About eleven months later, ranch employees were sent out to place water-proofed, battery powered car headlights in the deepest, fishiest spots. By the time the second annual contest began the ranch's spearfishermen were more than ready. The water is always dark below sixty feet and the lights drew fish like moths. The boat's driver told me that he had real concerns about sinking as he tried to ease the overladen vessel to contest weigh-in. They won but were permanently barred from any further competitions.

My family's first place on the lake was a barbeque pit and a sleeping porch just southwest of where FM-2353 reconnects with Hwy. 16. The farm and market wasn't paved when I was young and during the drought years of the late fifties, much of the stretch looked like the Sahara Desert with sand dunes that seemed to say, "Come run and play." 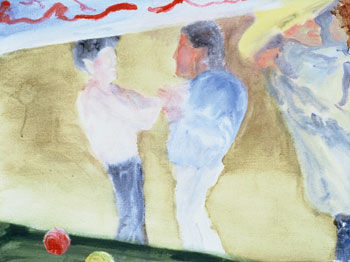 What didn't change on this road were the honky tonks, one on the west side, about midway, (painting above) and the other at the intersection with the highway. In my childhood it was called Jack's, and my mother was never happy to learn that my dad had let me tag along on one of his visits there. Usually it was for a cold drink but sometimes exciting things happened there and occasionally I got to see. Chicken fights in the back, fist fights in the front and high stake foot races on that sandy stretch back toward our house. 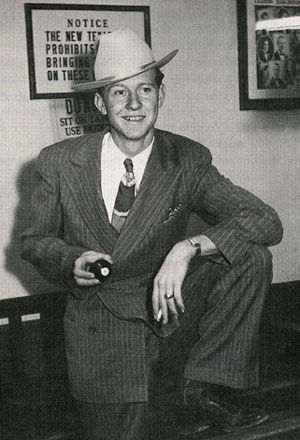 Amarillo Slim went to high school in Mineral Wells and said in those days he made more money foot racing than shooting pool or playing poker. I like to think he was one of those contestants in my memories. By 1990, the place had gone through several name changes and was then called The Corner. A guitar player/singer from Mingus named Leroy was a regular on weekends. The place was never more exciting. 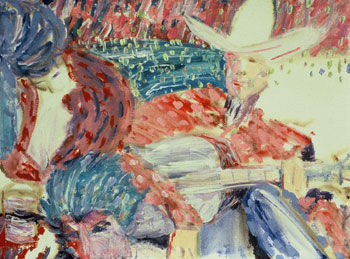 As you drive on up Hwy. 16 toward Graham, the bricked up building behind the liquor store at the top of the big hill used to be called the Corral. When they didn't have a babysitter, I got to go there with my folks. Live dance bands and alcohol sales were always rare in these parts and many patrons endured two or three hour drives to get to the honky tonk. Larry McMurtry points out that around here being a good dancer is as important a consideration in matrimony as income and looks. Rule was men could ask any woman to dance and it was bad form to decline. Dad was doing a song on stage when a bleary-eyed cedar hacker (the other two common occupations were roughneck and goatroper) asked my mom if he could "hold her frame" while they "wiggle." She couldn't say no and she never tired of retelling the story. Air conditioning was still rare so shutters were raised all the way around the dance floor and electric fans provided a breeze. The morning would usually find the roadhouse's current owner outside tacking back up the screens that had been torn loose when the two-step turned into the old one-two. 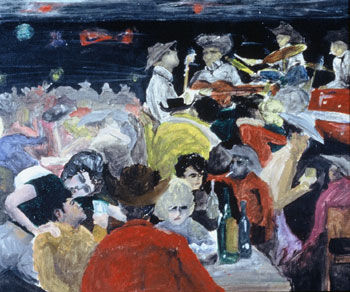 Continue 16 south to Brad and the intersection of 180. Hwy. 16 to the Bandera Mountains west of San Antonio may be the most historic and beautiful drive in Texas. Patricia Sharpe recently reviewed this drive in Texas Monthly.

Fort GriffinThis is a good opportunity to head west through Breckenridge to visit the historic community of Albany and Fort Griffin and its museum to the north. 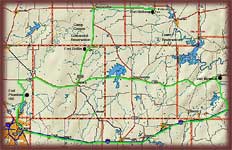 Click on the map to enter the Cross Plains Road Trip