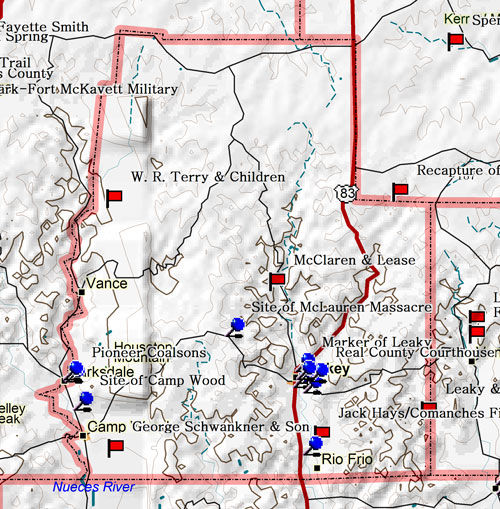 Near Route of Famous Cattle Trail

Marker Title: Near Route of Famous Cattle Trail
Address: US 83, S of Leakey
City: Leakey
County: Real
Year Marker Erected: 1968
Marker Location: from Leakey go south on US Highway 83 approximately 5.2 miles to R.O.W.
Marker Text: One of many "feeder trails" in Texas that converged with the legendary Chisholm Trail above the Red River, this route directed thousands of longhorns to northern markets during the first year after the Civil War. Many local settlers took part in the drives, which lasted for months, and their tales are full of stampedes and Indian raids. At times, the trail was used by herds of 200-300 hogs being driven 40 miles to local markets. The cattle industry and trails such as this helped save Texas' economy -- torn by the Civil War -- and enriched pioneer folklore. (1968)

Marker Title: Leakey Cemetery
Address: RR 337 and School Lane
City: Leakey
County: Real
Year Marker Erected: 1988
Marker Location: Corner of School Lane and RR 337 near cemetery entrance; Leakey.
Marker Text: Originally known as the Floral Cemetery and serving an earlier community by that name, this cemetery dates to at least 1881. Land for the graveyard was sold by John and Nancy Leakey for one dollar and a cemetery plot. The oldest documented burials here are those of Sara Catherine McLaurin (b. 1849) and fifteen-year-old Allen Lease, who were killed on April 19, 1881, in the last Indian raid in the Frio Canyon area. The next interment was that of Civil War Veteran John Colter Brice, who died April 30, 1881. The only public cemetery in the Leakey vicinity, this graveyard contains the burials of many of the area's early settlers. Gravestones attest to the hardships of life in the 19th and early 20th centuries and the epidemics of measles, typhoid fever, diphtheria, and influenza which claimed many lives. There are over 900 documented burials here, as well as a number of unmarked graves. Those interred in the Leakey Cemetery include pioneers, children, elected officials of Real and Edwards counties, community leaders and veterans. The founder of the town, John Leakey, and his wife Nancy are both buried here. (1988)

Marker Title: John Leakey
Address: US 83, on Courthouse grounds
City: Leakey
County: Real
Year Marker Erected: 1983
Marker Location: US 83, West side of Courthouse grounds; Leakey.
Marker Text: Tennessee native John Leakey (1824-1900) came to Texas in 1847, settling for a time in Henderson County where he was a brickmason and rancher. He and his wife Nancy (Patterson) moved to Uvalde County in 1852 near present day Sabinal. A desire to pursue other endeavors took him to the Frio Canyon where there was an abundance of cypress timber. Despite constant threats of Indian attacks, Leakey settled his family and started a cypress shingle business. He served the Confederacy as a freighter during the Civil War, hauling provisions for the troops. Leakey returned to his home after the war to establish a steam sawmill and to attend to his ranching interests. He also began a school for the children of the community, and his home often served as a resting place of itinerant preachers. The town, situated on the Bandera-Edwards County line, was laid out in 1833 and named in honor of the resourceful pioneer who donated land for this plaza, a church, school, and cemetery. Leakey served as county seat of Edwards County until 1891, and became county seat of Real County when it was organized in 1913. A successful businessman, Indian fighter and pioneer, John Leakey's contributions and leadership were vital to the early growth of the area. (1983)

Marker Title: Private Frank Marshall, C.S.A.
Address: US 83, Courthouse grounds
City: Leakey
County: Real
Year Marker Erected: 1965
Marker Location: Courthouse grounds; Leakey
Marker Text: Buried here, 3/10 mile from Camp Wood. A 29-year old Harrison Countian, symbolizes Texans who died for the Confederacy in the Arizona-New Mexico campaign. Served from April 19, 1861, till death June 16, in W. P. Lane Rangers in second front stretched from San Antonio to Santa Fe. Frontier posts at Camp Wood, Ft. Inge, Ft. Clark, Camp Hudson, Howard Spring and Ft. Lancaster supported the 1861-1862 campaign to make the Confederacy an ocean-to-ocean nation. Combat forces included such Texans as Tom Green, Wm. R. Scurry, W. P. Hardeman and Wm. Steele, all later to be generals in the Confederate army. Green and Scurry commanded troops that won Battle of Valverde in Feb. 1862. This victory and others enabled the Confederacy to occupy Arizona and New Mexico and hope to gain California. However, Texas troops found their lines too long and supplies an impossible problem. With scant food, no blankets, no means of transportation, the army limped back to Texas. On reaching San Antonio, troops hid near the Menger Hotel, pooled their rags to dress one man, then sent out for clothes to cover them so they could go home. Yet these same men re-grouped and won many victories later in the Civil War. (1965)

Marker Title: Site of McLauren Massacre
Address: RR 336, about 6 mi NW of Leakey
City: Leakey
County: Real
Year Marker Erected: 1968
Marker Location: from Leakey take US Highway 83 north 1 mile; then northwest on RR 336 approximately 5.5 miles
Marker Text: Occurred here on April 19, 1881. Mrs. Kate McLauren, her 3 small children, and 15-year old Allen Lease were in the garden when Lipan Apaches started to plunder the McLauren home. Lease, thinking pigs were in the house, was shot investigating the noise, and Mrs. McLauren was killed as she fled the garden. The children were unharmed and Maud, 6 years old, went for help because Mr. McLauren was away. Neighbors gave chase for 70 miles. Soldiers from Ft. Clark then took command, trailed and overtook the Indians in Mexico, killing all but two. (1968)

Marker Title: Catherine R. McLauren
Address: Leakey Floral Cemetery
City: Leakey
County: Real
Year Marker Erected: 1971
Marker Location: located in southwest corner of Leakey Floral Cemetery; Leakey.
Marker Text: A victim of the last Indian raid in Frio Canyon, April 19, 1881. Mother of three small children, "Kate" McLauren was home with them and a neighbor boy, Allen Lease, when a Lipan Apache band started to plunder their house. Although shot with a bullet, she sent her six-year-old child, Maud, for help, but died shortly after her husband John's return that night. When the cemetery in Leakey was established, she and Lease were the first burials. Recorded 1971

Marker Title: Real County
Address: US 83 at Courthouse grounds
City: Leakey
County: Real
Year Marker Erected: 1936
Marker Location: Southwest corner of Courthouse grounds; Leakey.
Marker Text: Located on the Edwards Plateau, Real County is in an area of rolling terrain broken by the canyons of the Frio River. Because of raids by Comanche, Apache, and Lipan Apache Indians, white settlement was hindered until after 1881. Mission San Lorenzo de La Santa Cruz was founded by the Spanish in 1762 near present Camp Wood. The county was created on April 3, 1913, from Edwards, Kerr, and Bandera counties: organized on July 26, 1913, it was named in honor of Julius Real (1860-1944), a prominent businessman and state senator, 1909-1914 and 1924-1928. Leakey, the county seat, was established by John Leakey (1824-1900), a pioneer settler in the region. (1968)

Marker Title: Real County Courthouse
City: Leakey
County: Real
Year Marker Erected: 2000
Marker Location: 4th Street, Courthouse Square, Leakey
Marker Text: Leakey was the county seat of Edwards County from 1883 to 1891 when a vote moved the seat to Rocksprings. Real County, named for businessman and State Senator Julius Real, was organized from parts of Edwards, Kerr and Bandera counties in April 1913. Leakey was named the county seat and a temporary building was erected on the square. Controversy over the site of the county seat continued for several years, so Judge D. D. Thompson began planning for a permanent courthouse upon his election in 1917. Voters approved bonds to finance a permanent structure. The bonds were financed through Hanover National Bank of New York. Architect H. A. Reuter designed the 1918 courthouse, and the firm of McCreary and Schott served as contractors. According to oral history, a local builder known as "Scotty" Archibald made a significant contribution, as well. E. F. Vanderbilt was construction superintendent. Using native limestone quarried from Tucker Hollow near the site, workers erected Reuter's vision of a Classical Revival edifice with a fortress-like façade. The rusticated limestone bands were laid in regular courses with quicklime bonding to create the building's texture and solid feel. A stone pediment with simple cornice topped by a standing seam metal roof contributes to the building's character. Renovations and additions made in 1978 transformed the original doors into large central windows with flat arch and transoms. The fine structure retains its original flavor and distinctive features and remains the center of Real County government. Recorded Texas Historic Landmark - 2000