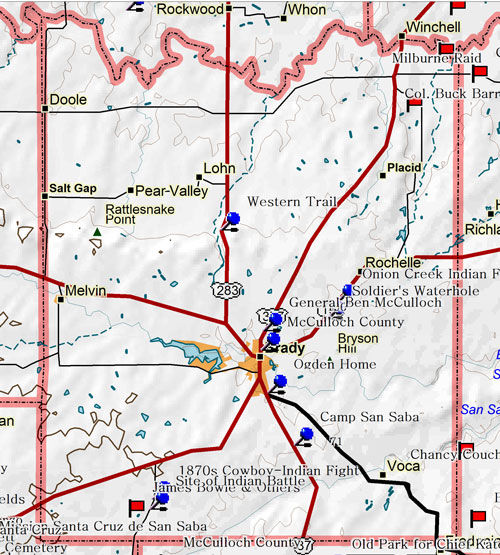 Marker Title: 1870s Cowboy-Indian Fight
City: Calf Creek Vicinity
Year Marker Erected: 1973
Marker Location: 0.5 mile southwest of Calf Creek on FM 1311 (or, from Brady, take US 87 about 16.2 miles west to marker, just east of junction with FM 503).
Marker Text: Near here in 1874 or 1875, 18 Indians attacked W.B. Brown and two comrades, spooking one horse and capturing bedrolls and grub, but sparing the men, who thankfully escaped. In the 1870s, when they were being driven off the range, capture of supplies meant victory to the Indians. (1973)

Marker Title: General Ben McCulloch, C.S.A. (1811-1862)
City: Brady
Year Marker Erected: 1964
Marker Location: Southwest corner of courthouse square, US 337/87 at US 190.
Marker Text: Distinguished Ranger, frontier surveyor, Indian fighter, lawman, statesman and military commander. Born in Tennessee. Followed David Crockett to Texas to fight in War for Independence. Commanded one of the "Twin Sisters" cannon in the Battle of San Jacinto, April 21, 1836. Served in the Congress of the Republic of Texas. In 1846, during war with Mexico, led Ranger company in successful scouting mission 100 miles behind enemy lines. During 1849 California gold rush was sheriff of Sacramento County. Home again in 1852 became U.S. Marshal, Eastern District of Texas. Led Texas volunteers in San Antonio Feb. 16, 1861, when U.S. arsenal was surrounded and its surrender demanded--an encounter in a charged atmosphere that could have become the first armed conflict of the Civil War, although it ended without the firing of a shot, and with U.S. troops leaving the state. President Jefferson Davis offered him first General Staff Commission in the Civil War. Made a Brigadier General on May 14, 1861, he had charge of troops in Arkansas and Indian territory. Was the Confederate Commander in victory at Wilson Creek, Mo., 1861. Was killed in Battle of Pea Ridge, Ark. (1964)

Marker Title: Onion Creek Indian Fight
City: Brady vicinity
County: McCulloch
Year Marker Erected: 1973
Marker Location: From Brady take US 190 north about 6 miles.
Marker Text: One night in 1866, five men from Richland Springs (about 25 mi. NE) recovered stolen horses from Indians camped near here. A metal arrow hit a Mr. Lafferty, slid halfway around his skull, was cut out with a pocket knife, and Lafferty survived. The grave of an Indian casualty is about 30 yards north. (1973)

Marker Title: Soldier's Waterhole
City: Brady vicinity
Year Marker Erected: 1964
Marker Location: From Brady take US 190 east about 5.5 miles. Take CR 412 east 2.5 miles to marker.
Marker Text: U.S. soldiers under command of Robert E. Lee used this site while traveling the nearby military road and patrolling this area for Indians. Westbound immigrants also camped here prior to the Civil War; Here 27 Indians surprised and massacred 18 men, women and children burned their wagons and stole their horses. 1850; 1869. ON THE BACK SIDE OF THE MONUMENT: Ancient Indian Camp Ground; Erected in 1964 by McCulloch County Historical Society.

Marker Title: Western Trail
City: Brady vicinity
Year Marker Erected: 1970
Marker Location: From Brady take US 283 about 10 miles north to marker at pass between "Brady Mountains".
Marker Text: Through this gap in hills called "Brady Mountains" passed the western cattle trail, also known as "Dodge City Trail", "Fort Griffin Trail", or "The Beef Trail". Said to have originated in 1876, this was the last of the old-time Texas cattle trails, those east of here having been closed by farmers. Large numbers of cattle were driven up this trail 1876 to 1886--over 200,000 head in 1881 alone. This trail started near Brownsville and came up to San Antonio, then northwest through or near Uvalde and Kerrville. Skirting the Nueces River, it came over the divide, crossing headwaters of the South Llano River, fording San Saba River at pegleg crossing, going down river about six miles, then turning north. Near Brady, feeder trails came from Fort McKavett and points west, and from San Saba, to the east. After leaving Cow Gap (likely so named from Cow Creek, about 500 yds. W of this marker), it went northwest and over the Colorado at "Beef Crossing" in Waldrip's Bend, then to Coleman, Baird, Fort Griffin and Vernon, spanning Red River at Doan's Crossing. Northward through Indian country it went to Dodge City, Kans., and later into Wyoming and Montana. This trail was of great worth to the territories it traversed. (1970)