James Bowie and Others Fight on the San Saba

November 2, 1831, James and R.P. Bowie, David Buchanan, Robert Armstrong, Jesse Wallace, Matthew Doyle, C.D. Helm, James Coryell, for whom Coryell County was named, and two or three others, under the leadership of James Bowie, left San Antonio in search of a Spanish silver mine, and old Mission San Saba. November 19th following, the party met two Comanches and a Mexican captive, who stated they belonged to Chief Isaone's band, and were on their way to San Antonio, to return a drove of stolen horses, which they had recovered from the Wacos and Tehuacanos. After being hospitably received and presented with presents, these Comanche spies returned to their companions on the Llano. The next morning the Mexican captive, again visited Bowie and his men and stated that the above chief was anxious for the whites to know that one hundred and twenty-four Tehuacanos and Wacos, together with forty Caddos, were upon their trail and armed to annihilate the Texans.

The treacherous Comanches also sent word they were doing their utmost to prevent the above tribe from assaulting the expedition, and would gladly escort the Texans back toward San Antonio, if they preferred. Realizing this was perhaps one of the well known intrigues commonly practiced by the Comanches, the Texans pitched their camp at an advantageous place, protected by clusters of live oaks, so often seen in this section of the country. This location was approximately six miles below the ruins of the old San Saba Mission. The next morning the party were making preparations to continue their journey, when they discovered Indians were following their trail. The Texans, being greatly outnumbered, sent R.P. Bowie and David Buchanan to talk terms of peace with the Indians, but the Indians refused to send a messenger forward to meet them, and said "Howdy do," fired and broke Buchanan's leg. R.P. Bowie in exchange fired his double barrel shotgun and pistol. He then took Buchanan on his shoulder and started toward the Texans. The yelping and dancing demons, continued to fire but their shots and arrows failed to bring Bowie down. As a consequence, eight Indians on foot charged with their tomahawks, but the remaining Texans rushed out with their rifles and killed four of the eight Indians. The remaining savages quickly retreated. Shortly afterwards, it was discovered that a hill northeast of the Texans was red with savage warriors who were under the command of a principal chief. James Bowie cried, "Who is loaded?" "I am," responded C.D. Helm. Bowie directed Helm to fire. He did and not only broke the chief's leg but killed his horse. Six or eight warriors rushed to his aid and by this time four more Texans were reloaded. They too, were directed to fire, and successfully finished the chief's career and wounded several others. Soon, another chief appeared on the scene of action. James Bowie took Buchanan's gun and downed this chieftain.

By this time, fifteen or twenty Indians, said to be Caddos, concealed in the bank of the creek, back of the Texans, wounded Matthew Doyle, and one other. The Texans were now practically surrounded and were forced to retreat to a better place of concealment. After charging the Texans for about two hours the Indians, who were losing heavily, changed their mode of fighting. The prairie grass was fired and it spread so rapidly it threatened the very existence of the Texans. It seemed that if they stood their ground, they would be destroyed by fire. A consultation was held. The whites decided to do their utmost to smother the flames with buffalo robes, etc. At the same time, they continued to build up breastworks out of available brush, rock and dirt. Night was now fastly approaching from the East. The Indians made a final assault, mainly for the purpose of recovering their dead and wounded, which lay in all directions. They then withdrew to a distance approximately three hundred yards away, and camped for the night.

During the night, James Bowie and his men could hear the Indians crying over their dead. The next morning the savages retreated to a mountain about one mile away where they buried their dead warriors. Two of the Texans reconnoitered the ground where the Indians spent the night, and forty-eight bloody beds were counted. The Comanche themselves later stated that 82 of their warriors were killed. These figures, however, seem to be too large. The Texans lost one man. Three others, including James Coryell and David Buchanan, were wounded.

J.W. Wilbarger includes a version of this story from the point of view of General R.P. Bowie in his book Indian Depredations in Texas: 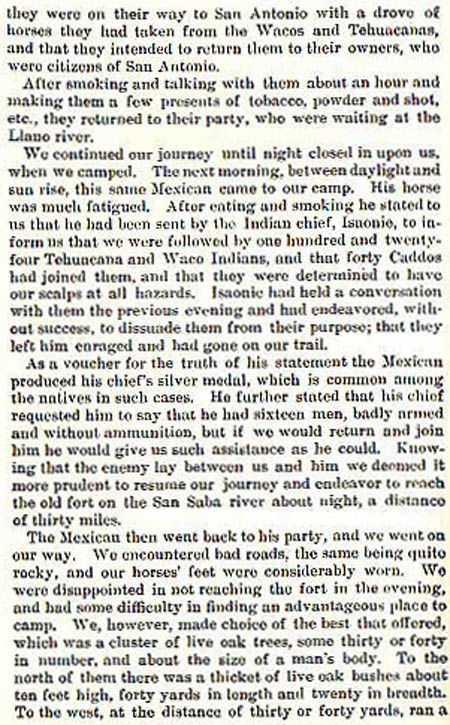 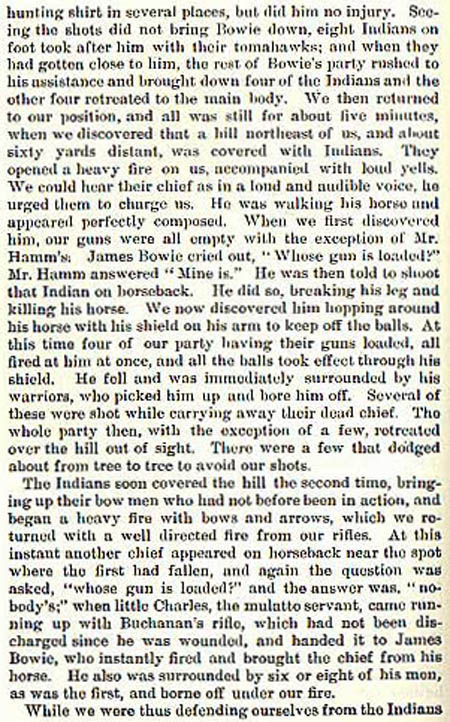 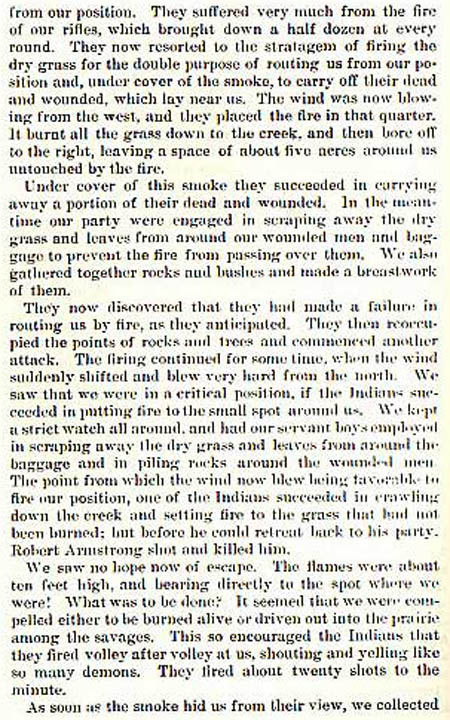 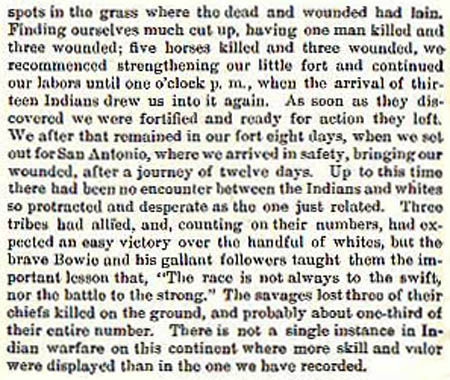