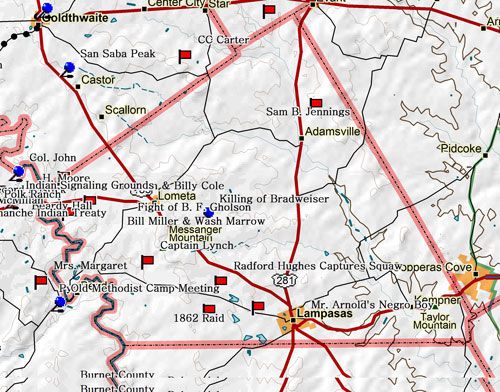 Marker Title: Horrell-Higgins Feud
Address: Lampasas County Courthouse (west side)
City: Lampasas
Year Marker Erected: 2000
Marker Text: The Horrell and Higgins families were among the early settlers of Lampasas County. Tom, Mart, Merritt and Sam Horrell were accused of many crimes, including cattle rustling and murder. Pink Higgins was a cattleman and trail driver who, in 1876, began accusing the Horrell brothers of stealing his cattle. On January 22, 1877, Pink Higgins shot and killed Merritt Horrell in the Gem Saloon. This was the beginning of a six-month battle between the Horrell brothers and Pink Higgins, Bob Mitchell, Bill Wren and their followers. On March 26, Tom and Mart Horrell were ambushed on their way into Lampasas. Captain John C. Sparks of the Texas Rangers went in pursuit, but no one was captured. Higgins remained a fugitive, but eventually surrendered and was ordered to appear in court. On June 4, the Lampasas County District Clerk's Office was burglarized and District Court records were destroyed. Three days later, the biggest battle of the feud took place on the public square in Lampasas; one man from each side was killed. Major John B. Jones, commander of the Texas Ranger Frontier Battalion, came to Lampasas and sent Sergeant N.O. Reynolds and a company of Rangers out to capture the Horrells. The brothers were arrested and agreed to make peace by sending a letter of reconciliation to the Higgins party. This treaty was the formal end to one of the worst feuds in Texas history. What was perhaps the true termination of the feud came in 1878 in the town of Meridian, when Tom and Mart Horrell were murdered in their jail cell by a vigilante mob. Sam Horrell left Texas, resettled in Oregon and died of old age. Pink Higgins eventually settled near Spur in West Texas and went to work as a range detective. (2000)

Marker Title: Huling Cottage
City: Lampasas
Year Marker Erected: 1965
Marker Location: 205 Second Street, Lampasas.
Marker Text: Built 1860-1872. Native limestone and cedar. New England colonial architecture. Bought 1872 for $3,000 in gold by Mrs. Elizabeth Bullock Smith Huling, who as an orphan from Kentucky was in the group of Texas families fleeing toward the Sabine River just ahead of Santa Anna's army in the 1836 "Runaway Scrape". Her husband, Thomas B. Huling (1805-1865), was in the revolution, and was later a Republic of Texas Congressman.

Marker Title: Indian Culture Sites
Year Marker Erected: 1969
Marker Text: Scattered throughout this area, campsites, flint quarries, and rock paintings testify that primitive tribes lived here for centuries. Tonkawas, Comanches, and Lipan Apaches were the main inhabitants in the early 1800s. Typical of the sites was a burial found near a river. The shallow grave contained the tightly flexed skeleton of a man aged about 60 at his death. Pitted bones (indicating disease), a broken arm, and worn teeth suggested the difficulty of his life. A pebble painted with black lines, probably an offering, was also found near the burial.

Marker Title: Lampasas County
City: Lampasas
Year Marker Erected: 1936
Marker Location: at rest stop, Highway 281, about 3.5 miles west of Lampasas.
Marker Text: Formed from Travis and Bell counties; created February 1, 1856; organized March 10, 1856; The name Lampazos, first given to the river by the Spaniards, was suggested by the many cockle-burs in the region. First settlements about 1850; first railroad, 1882; county seat, Burleson, after 1856, called Lampasas.

Gunfight at the Lampasas Saloon

Marker Title: Gunfight at the Lampasas Saloon
City: Lampasas
Year Marker Erected: 2000
Marker Location: west side of Lampasas County Courthouse lawn, Lampasas.
Marker Text: In the early 1870s Lampasas was a wild frontier town. In January 1873 Sheriff S.T. Denson was shot while arresting brothers Wash and Mark Short. The district judge sent men to apprehend the Short brothers, but the posse was stopped by Ben, Tom, and Mart Horrell and several others. Sheriff Denson and the justices of the peace of Lampasas County appealed to Governor Edmund J. Davis for the assistance of the State Police. On February 10, Governor Davis issued a proclamation prohibiting the carrying of sidearms in Lampasas. On March 14, Captain Thomas Williams and seven state policemen entered Lampasas to enforce the proclamation. The State Police immediately arrested Bill Bowen for carrying a gun in town. Bowen persuaded Captain Williams and two of his men to enter Jerry Scott's Lampasas Saloon, this led to a gunfight between the State Police and the Horrell brothers and their associates. Three officers were killed in the saloon and a fourth was fatally wounded while trying to escape. The police were buried in Lampasas, but Captain Williams was reinterred in the Texas State Cemetery in Austin. More State Police came to Lampasas and joined forces with the sheriff and Lampasas and Burnet County Minute Men companies to search for the Horrell Gang. They arrested four men connected with the incident. In early May the Horrell gang attacked the Georgetown Jail and released Mart Horrell and Jerry Scott form custody. The Horrell gang remained in the Lampasas area until September when they left for New Mexico. In 1874 they returned to Lampasas. In 1876 the Horrell brothers stood trial for the murder of the State Police, but were found not guilty. (2000)

Marker Title: Phantom Hill Road
City: Lampasas
Year Marker Erected: 1974
Marker Location: from Lampasas, take SH 190 west about 2 miles.
Marker Text: In 1851-52, in a major reorganization of the frontier defense system, the U.S. Army built a line of 7 forts between the Red River and the Rio Grande to protect the scattered remote settlements and travel routes to California. On Nov. 14, 1851, Fort Phantom Hill was established near present Abilene (120 miles NW) by Col. J.J. Abercrombie and the 5th Infantry. The Phantom Hill Road, the vital transportation and communication link between the fort and military headquarters at Austin (80 miles SE), was the first road in Lampasas County, and crossed at this site. Supply trains of up to 24 wagons drawn by mules, horses, and oxen passed along this route to the frontier fort. The road was used primarily by the military until the abandonment of Fort Phantom Hill on April 6, 1854, but also served as a thoroughfare for early settlers entering the region and continued in that capacity until after the Civil War. About 1870, traffic passing through the area was diverted to the Senterfitt Stage Station (1.5 miles SW), and this section of the road abandoned. Several isolated segments of the Phantom Hill Road remain in use in the county, and physical evidence of the Emy's Creek Crossing (200 yards S) still exists.