Lampasas Raid During April of 1862

John N. Gracey, numbered among the first settlers of Lampasas and erected this health resort's first hotel. The 8th of April, 1862, his son, James Gracey, who was thirteen or fourteen years of age went about nine miles westward of Lampasas to the home of Thomas Dawson, a single man, to hunt a horse. John Stockman, a boy about the age of James Gracey lived with Thomas Dawson.

During the morning of the 9th of April, 1862, the two boys reached a point a mile or two from the ranch of Thomas Dawson. The boys became separated. Young Stockman was after some turkeys in a thick cluster of timber. James Gracey heard a horse bell and started in a different direction. In a short time, fifteen savages, driving approximately one hundred head of horses, appeared. True to their name and tradition, they captured and scalped young Gracey. The Indians then stripped James of his clothes and stood him on the ground, and beckoned for him to run. As he did, his body was filled with arrows.

John H. Stockman, hidden in the nearby timber, plainly saw the bloodthirsty Indians brutally assault young Gracey and really expected to be murdered in a similar manner. But the savages' large herd of stolen horses were now almost stampeded. And it required their closest attention to keep these animals traveling in the right direction. The warriors were now also attracted by the discovery of James Baker and family, who were returning to San Saba County from Austin. So John H. Stockman successfully escaped.

At the time, when they were surrounded by the savages, Mr. Baker, Mr. Baker's eight months old daughter, Elga Pope Baker, and father-in-law, Mr. Austin, rode in a buggy. Mrs. Baker rode horseback a short way behind. Mr. Baker and family had spent the previous night in Lampasas, and it was now about nine o'clock in the morning. A "Norther" blew swiftly from the north and the savages were briskly showering these worthy citizens with arrows. Mr. Baker stepped out on the ground, was dangerously injured, and lost all his guns and ammunition when the team ran away with the vacated buggy. He had one weapon in his possession, however, and it contained only one load. With this Mr. Baker backed backward to a lot of timber. Mr. Austin, being aged and decrepit, was unable to render much assistance, particularly since the remaining guns had been carried away by the runaway team. In a short time a savage shot an arrow through seven folds of a Navajo blanket and wounded Mr. Baker's baby.

Fortunately, however, for the citizens, the runaway team ran directly toward the home of Thomas Dawson. When the latter saw the horses and buggy pursued by savages, he knew someone was in distress. So Dawson started toward Lampasas to give the alarm. But he had only gone about one mile when he accidentally came upon Dempsey Pace, John Greenwood, Geo. Weldy and Newton Knight; Lampasas citizens who were out hunting. These local citizens then took the back trail of the buggy and in a short time, saw the savages, who were at a great distance and who seemed to want to fight. But instead of pursuing them, the citizens pushed on to render aid. When Mr. Baker and his little family were found, a litter was made and they were carried to the home of Thomas Espy, who lived about two miles east of the Dawson home. Here, Mr. Baker lay for several weeks, on the divide between life and death, but finally recovered, and since the arrow had been already spent by penetrating seven folds of a blanket, Mrs. Elga Pope (Baker) Ward, who now lives in Ballinger, and who was the baby wounded, only received a painful wound and soon recovered.

While the Indians were assaulting the Baker family, young John H. Stockman was making his escape. A white shirt he wore he soon removed, for fear it would be more easily detected by the savages. When he had to cross a prairie, Stockman lay down and crawled and at one time, the Indians, who were chasing the stampeding horses, almost ran over him. But, although his body was badly lacerated with briers and thorns, Stockman made his way to the home of Thomas Espy, and perhaps, reached that point prior to the arrival of the citizens with Mr. Baker and family.

Note: Author personally interviewed and corresponded with Mrs. Elga Pope (Baker) Ward, who was the daughter wounded, R.M. Marley, M.J. Bolt, John Nichols, D.R. Holland, and others who lived in Lampasas and adjoining counties at the time.

J.W. Wilbarger provides a second version of this story in his book, Indian Depredations in Texas, which is described as having occurred one year earlier. 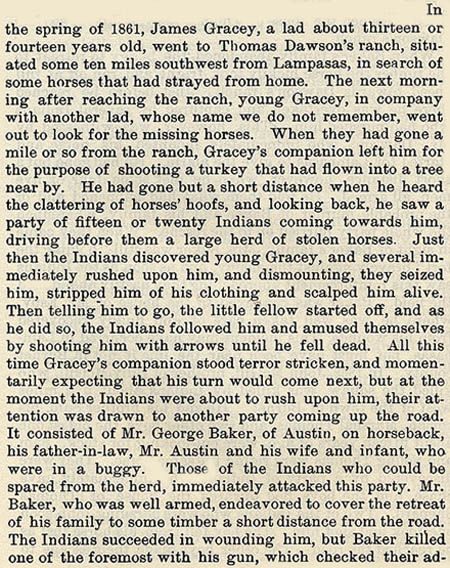 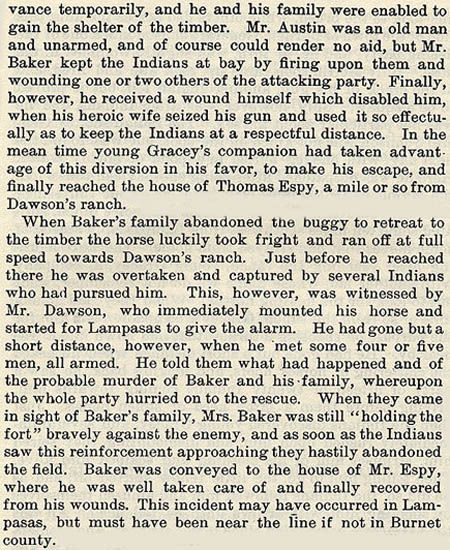