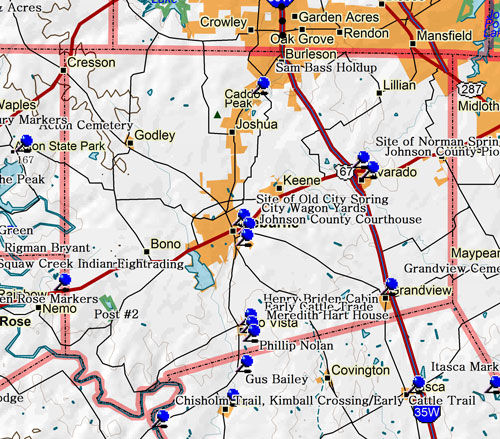 Marker Title: Henry Briden Cabin
City: Rio Vista
County: Johnson
Year Marker Erected: 1975
Marker Location: First State Bank grounds, Highway 174, Rio Vista
Marker Text: Henry Briden (1825-1908) came to Texas from his native Germany in 1845 and served for two years as a Texas Ranger. In 1849, he and his wife, Lucinda Sevier (1831-75), became first permanent white settlers in what is now Johnson County, when they built this cabin on the east bank of Nolan's River (2.5 mil. northwest). The one-room log structure was later used as a barn when Briden erected a larger home nearby. In 1974, it was restored and moved to this site.

Marker Title: Early Cattle Trade
City: Rio Vista
County: Johnson
Year Marker Erected: 1965
Marker Location: on grounds of Rio Vista Street Bank SH 174, Rio Vista.
Marker Text: Famed for its beef since era of the Republic, Texas fed a great part of the Confederacy-- both civilians and army-- in the Civil War years, 1861-1865. Routes for beef supplying were many: Shreveport Trail to Vicksburg, Miss.; Alexandria Trail to Natchez, Miss.; Opelousas Trail to Woodville, Miss., and on to Mobile, Ala.; Old Government Road to Little Rock, Ark.; Oliver Loving's 1859 trail north, to Indian Territory; trails to all army depots and even to Mexico. Cowboys had to swim cattle across rivers-- even the Mississippi. After undergoing such hardships, one outfit was mistakenly arrested by Confederates. Lt. Col. J.F. Scurlock and son, from Johnson County, on a Texas beef drive into southern Louisiana, were arrested by Federals and died in prison, of fever. Meredith Hart (1811-1864), a leading beef supplier, came to Johnson County in 1855, after fighting for the Texas Republic in 1836. In the 1850s, he sold beef to the U.S. Army. During the Civil War, he was one of the ranchers victimized by beef contractors using counterfeit money, but accepted losses in the faith that beef was feeding his sons and others on Confederate fighting fronts.

Marker Title: Grandview Cemetery and Original Grand View Town Site
City: Grandview
County: Johnson
Year Marker Erected: 1999
Marker Location: FM 4, just E of CR 401
Marker Text: John Whitmire, the son-in-law of early settler F.L. Kirtley, is credited with naming this town in 1854 by saying, "What a Grand View!" Kirtley donated 2.5 acres for a Baptist church and cemetery in 1856. Intending to lay out a town plat, James F. Scurlock purchased about 1400 acres of land surrounding the cemetery the same year. The oldest marked burial here is that of James F. and Rebecca Criner Scurlock's child, James C., who was born and died on June 4, 1857. By 1860 Grand View included three general stores, a blacksmith shop, a church building and Lodge No. 266, A.F & A.M., chartered in 1861 as the first Masonic lodge in Johnson County. After James Scurlock's death during the Civil War, his family sold the town site to F. M. Sansom. Several stores, a saloon, and more churches were established as the community grew. Of the many graves in the cemetery, one has taken on the status of local legend. A pair of young travelers came to Grand View one evening in summer 1867. The young woman was found murdered the next morning with no sign of her companion. The people of the community buried her in a handmade coffin and marked her tombstone "Annie," the name on an embroidered handkerchief she carried. The African American section of the cemetery contains the graves of many residents, including the unmarked graves of Scott and Elmira Matlock. They were among Grand View's earliest settlers. The railroad came through about a mile southeast of the town in 1881, and by 1883 the main section of Grand View had moved to it. The cemetery gradually took over the entire old town site. The cemetery continued to serve the community, now known by the single word "Grandview." The cemetery and the original town site remain as a chronicle of the pioneers of Johnson County. (1999)

County: Johnson
City: Cleburne
Description: The Johnson County Courthouse is a freestanding structure occupying a full block at the heart of the Cleburne commercial district. The structure is essentially rectangular in shape, with the East and West facades representing the longer sides of the rect.

Marker Title: Johnson County Pioneers and Old Settlers Reunion
City: Alvarado
County: Johnson
Year Marker Erected: 1992
Marker Location: 1 Reunion Drive, Alvarado
Marker Text: One of the largest events of its kind in Texas, the Johnson County Pioneers and Old Settlers Reunion traces its beginnings to 1892, when local farmer and newspaper correspondent John James (1852-1927) proposed the idea to some of his neighbors. Although met with initial rejection, James, together with some fellow newspaper writers, organized a picnic at Elm Grove in June 1893. Those in attendance voted to form an organization to oversee plans for an annual reunion. The first official Johnson County Pioneers and Old Settlers Reunion was held July 27-28, 1893, at Gathings Park northeast of Cleburne, with more than 2,000 people in attendance. Subsequent reunions were held in Alvarado, Grandview, Venus, and Cleburne, until the organization purchased land at this site for a permanent reunion campground. The first pavilion, built here in 1906, was later destroyed in a tornado, and the second one burned in 1965. It was replaced by a larger structure in 1966. Through the years, the reunion has grown to attract more than ten thousand participants to such events as carnivals; parades; queen, baby, and fiddle contests; and musical concerts. It has evolved into one of the area's most significant cultural institutions.

Marker Title: Site of Norman Springs & Norman Grove
City: Alvarado
County: Johnson
Year Marker Erected: 2000
Marker Location: 6921 US 67 at IH-35
Marker Text: William Balch (1804-1870) claimed land around this site as a member of the Peters Colony in 1849. When he returned with his family in 1851, they found a group of Caddo Indians camping on one side of the springs. The Balch family built their cabin on the other side and lived peaceably with their neighbors. Other Caddo were living in the area that became Alvarado. Like the new settlers, they were attracted by the abundance of fresh water. The springs were located on the road from Birdville and Fort Worth to Hillsboro, Waco, Ft. Graham and other destinations. William Balch founded the town of Alvarado in 1854 and the family moved into town. Joe (1798-1882) and Sarah (1797-1897) Shaw and their family settled here and farmed the land. Joe Shaw was a three-term county sheriff. With settlers coming in increasing numbers, the Caddo Indians moved to the Oklahoma territory or further west, and by 1860 the area was dominated by new settlers. Tennessee native Lafayette Norman (1826-1904), veteran of the U.S. war with Mexico and later the Confederate Army, purchased 245 acres around this site with his third wife Julia In 1872. The Normans supplied thirsty and weary travelers with access to their spring; the site became known as Norman Springs and Norman Grove. A seven-year drought in the 1930s and a five-year drought in the 1950s significantly reduced the water table in this region. Norman Springs slowly became little more than a muddy patch. By the dawn of the 21st century, the once free-flowing spring that provided priceless fresh water to the early Indians and pioneer settlers of the Johnson County frontier was marked only by a willow tree. (2000)