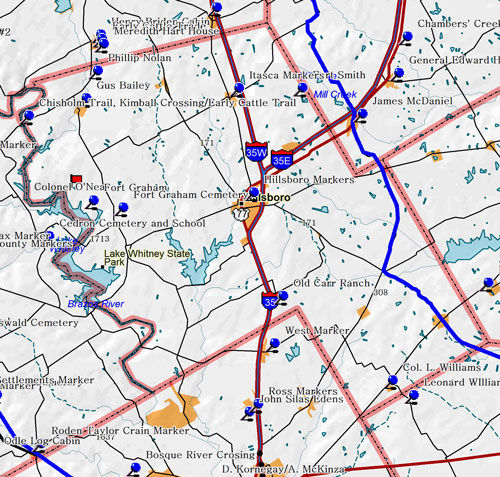 Marker Title: Gus Bailey
City: Blum
Year Marker Erected: 1963
Marker Location: at Junction of FM 933 and FM 67, Blum.
Marker Text: Leader, Hood's Texas Brigade Band. His wife Mollie smuggled notes and quinine past enemy in her hair. Baileys' postwar shows still flew Confederate flag. 1869 and afterwards, Gus and Mollie and nine children headquartered circus in Blum. Owned show lots in 100 towns of Texas. Ex-Confederates saw their circus free. Bailey wrote "Old Gray Mare Ain't What She Used to Be" on eve of second Manassas Battle, when mare spooked camp by running thru with load of tin pans. A memorial to Texans who served the Confederacy erected by the State of Texas, 1963. (Back Side Gus Bailey) Texas Confederate Songs: "Lone Star Defenders", "Land of Texas", "Bombardment and Battle of Galveston", "Dick Dowling and the Davis Guards at Sabine Pass", "The Ranger's Farewell", "Baylor's Partisan Rangers", "Awake! to Arms in Dixie!", "Capture of 17 of Co. H, 4th Texas Cavalry", "My Texas Land", "To the Beloved Memory of Maj. Gen. Tom Green", "Lone Star Banner of the Free", "The Gallant Second Texians", "The Rum Raid at Velasco", "The Texas Rangers at the Battle of Chickamauga", "Terry's Texas Rangers", "Hood's Texas Brigade", "The Navasota Volunteers", "Song of the Fifth Texas Regiment", "The Dying Texas Soldier Boy", "Texians, to your Banner Fly", "The Horse Marines at Galveston", "O, He's Nothing But a Soldier", "The Martyrs of Texas", "The Texas Sentinel in Virginia", "An Old Texian's Appeal." Texas Troops marched also to such southern favorites as "Dixie", "The Yellow Rose of Texas", "The Bonny Blue Flay" and "Mother Is the Battle Over?"

Marker Title: Old Carr Ranch
City: Abbott
Marker Location: 1 mile south of Abbott on Willie Nelson Road (near old chimney ruin).
Marker Text: In 1854 area pioneer D.C. Carr settled this ranch, which covered land in both Hill and McLennan counties. D.C. Carr and his brother J.C. had come to Texas in 1840 and were instrumental in the early growth of the nearby towns of Abbott and West. A log cabin built on the ranch served as a store, postal station, and the office of the stagecoach line that serviced the area until 1881. The historic property, which has remained in the Carr family, contains evidence of an early Indian camp and burial mound and is the site of a cave formed by the Balcones Fault.

Marker Title: Fort Graham
City: Whitney
Year Marker Erected: 1936
Marker Location: Fort Graham Park from Whitney take FM 933 north about 5.3 miles turn west onto FM 2604 and follow to Old Fort Park, barracks and marker located on Cedar Hill Road.
Marker Text: The Commission allocated $6,700 for the purchase of the fifty-acre site and the reconstruction of the barracks, partly from the original stone. The property is deeded to the Hill County Commissioners Court and is supervised by four trustees. The building and grounds are used for public gatherings and as a meeting place for civic organizations. A bronze plaque on a small granite monument briefly relates the history of the fort. J.O. Galbraith, architect, drew the plans for the reconstruction. Reconstructed Barracks of Fort Graham A frontier military post established on the site of a Waco Indian village by Brevet Major R.A. Arnold, Second United States Dragoons, on March 27, 1849. Named in honor of Lt. Col. William M. Graham who fell at Molina del Rey, September 8, 1847. Abandoned November 9, 1853, after settlements had been made further west. More

Marker Title: Fort Graham Cemetery
City: Whitney
Year Marker Erected: 1995
Marker Location: from Whitney take FM 933 about 4.5 miles north.
Marker Text: Settlement in this area began shortly after Fort Graham, a frontier military post established here in 1849, was abandoned in 1853. The first recorded burial in this cemetery, named after the fort, was that of infant Charley Botkin in 1879. The cemetery was the only one of a number of historic graveyards in this area to remain undisturbed by the creation of Lake Whitney in the early 1950s. Among the more than 300 people buried here are many of the area's early settlers and their descendants. The cemetery remains active and is maintained by an association formed in 1966. Sesquicentennial of Texas Statehood 1845-1995

Marker Title: Site of Fort Smith
Year Marker Erected: 1936
Marker Location: from Itasca take FM 934 about 8 miles east to FM 4319 marker is across the road on a dirt trail just north on the west side of the intersection, behind fence.
Marker Text: One of the chain of fortifications extending from the Colorado to Red River established in about 1846 as a protection against Indians; named for Major Thomas I. Smith.

Marker Title: Itasca Railroad Depot
City: Itasca
Year Marker Erected: 1982
Marker Location: at Itasca Museum, Hooks Street, on east side of Itasca.
Marker Text: The second railroad depot for Itasca, this Victorian structure was built in 1895, fourteen years after the town was founded along a line of the Missouri, Kansas & Texas Railroad. It was constructed large enough to accommodate both passenger and freight service. A landmark in the town and a symbol of the area's early economic growth, the depot served as a transportation center until the late 1960s. In 1972 it was moved to this site. Recorded Texas Historic Landmark - 1982

Erected in Memory of Phillip Nolan

Marker Title: Erected in Memory of Phillip Nolan
City: Blum
Year Marker Erected: 1965
Marker Location: from Blum take SH 174 north about 3 miles to marker.
Marker Text: Born in Ireland; first came to Texas and established residence at Nacogdoches in 1791. When killed, was a resident of Natchez, Miss. Killed near this site, March 21, 1801 by the Spaniards. Was buried here by his African slaves Caesar and Robert. Nolan's death aroused a wave of indignation that led to the Independence of Texas.