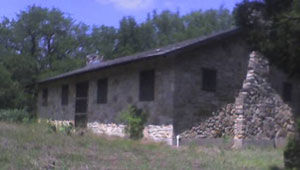 Jerry Thompson reports in his book, Confederate General of the West, that on November 8, 1850, Henry Hopkins Sibley:

...marched into Fort Graham and assumed command of his old company.

Fort Graham, established by Colonel William S. Harney the previous year, was located on the east bank of the Brazos River near an old Indian village. Sibley found conditions at Fort Graham quite different from his recruiting duty. His quarters, built on the north side of the fort near the road leading to the village of Waco, were crudely constructed of oak logs and a shingle roof. Carpenter, wheelwright, and blacksmith shops of cedar logs were built by hired laborers. The post hospital, made from squared oak logs, included two stone chimneys and an adjacent kitchen. Enlisted men's quarters, which had been built by a company of the Eighth Infantry, were also constructed of logs. The post magazine was the only stone building. Like all frontier posts Fort Graham had a guard house, but it was a peculiar looking roofless structure. the post also included a store house which the dragoons had recently built. Mail at the post arrived from Austin twice a week. 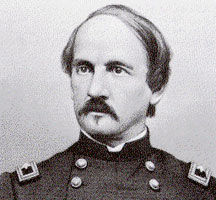 Fort Graham, a United States Army post, was established in March 1849 and was occupied on April 17 of that year by Maj. Ripley A. Arnold (commanded by Col. William S. Harney) and companies F and I of the Second Dragoons under command of Bvt. Brig. Gen. William S. Harney, commander of the Frontier District of Texas. The site was near the eastern bank of the Brazos River at Little Bear Creek fourteen miles west of the site of present Hillsboro. According to material in the National Archives, the post was named for James D. Graham of the Corps of Topographical Engineers. Other sources, however, state that it was named for Lt. Col. William M. Graham of the Second Dragoons, who was killed in 1847 at the Mexican War battle of Molino del Rey.

The annexation of Texas and the other territorial gains made by the United States as a result of the Treaty of Guadalupe Hidalgo had given the United States Army the responsibility for frontier defense and communication in the Southwest. Fort Graham was intended to help anchor the northern frontier defense line between the Towash Indian village and Fort Washita. Arnold's orders directed him to provide escorts for supply trains and travelers, to patrol the countryside as far as the forks of the Trinity, to protect the citizens from hostile incursions by Indians, and to attempt to conciliate the local Indians. During the first months, the men began construction of a number of log and clapboard structures including a commissary, officers' quarters, and a stable. Meanwhile, civilian laborers built a hospital, a carpenter and wheelwright shop, a blacksmith shop, three corncribs, a wagon and mule yard, and a quartermaster's storehouse.

Building and patrol duties, however, were hindered by a lack of adequate manpower. Arnold was assigned a complement of eighty-nine officers and men, but according to post returns filed by Arnold in April, he had only fifty-five men, including five officers and seven noncommissioned officers. This number was further reduced in June, when Arnold turned the command at Fort Graham over to Lt. Fowler Hamilton and moved north with F Company to the West Fork of the Trinity River to establish Fort Worth. Soon after Arnold's departure, Graham's new commanding officer reported that he had only one officer and forty-six men available for duty. The situation did not improve until early fall, when Gen. George M. Brooke, the new commander of the Eighth Military Department, was able to send two companies of the Eighth United States Infantry under command of Bvt. Lt. Col. James V. Bomford to the northwestern posts. Bomford and Company H remained at Fort Graham, where the colonel assumed command, while the other company proceeded to the Trinity to reinforce Fort Worth.

During 1852 Fort Graham continued to serve as a listening post along the northern frontier, but by 1853 the line of settlement had advanced far to the west, and Graham's location ceased to be strategic. In August 1853 Bvt. Maj. Gen. Persifor F. Smith ordered Fort Graham closed and the troops moved to other posts. Before the order could be carried out, the post surgeon, Josephus M. Steiner, shot and killed Major Arnold, who had returned to Graham to help close it. Despite this disruption the troops began leaving Fort Graham in October, and the post was closed by November 9, 1853.

Fort Graham was fairly typical of Texas frontier posts of the 1845-60 period. No hostilities occurred between the army and the Indians in or near it, and the post was far more important as a scouting and reporting station than as a defensive outpost. Its strategic location near the upper Brazos villages, however, and its role in the affairs of the Indian agents indicate that Graham may well have been one of the most important pre-Civil War ports in Northwest Texas.

By offering protection against Indian raids, Fort Graham helped open the Hill County area to settlement. It also provided a market for local goods and labor, stimulated economic growth, and helped attract settlers to the region. The post was not in existence long enough, however, to build up a large community in the immediate vicinity. Although a hamlet called Fort Graham developed near the post, attempts to develop a major townsite there after 1853 were unsuccessful. By 1890 the population of the settlement had dropped to 250, and it soon disappeared. In 1936 the Texas Centennial Commission arranged for the state to buy the site, erect a marker, and reconstruct the barracks at a nearby site, where the building was used by local civic groups. With the development of Lake Whitney in the 1970s, the site was flooded, and the fort was again rebuilt at what is now Old Fort Park.

From the book, Frontier Forts of Texas, by Charles M. Robinson, III:

Reconstruction in Old Fort Park at the end of FM 2604, about seven miles northwest of Whitney

Local citizens organized the Fort Graham Restoration Committee, to relocate and reconstruct the building. Funds were raised, the barracks was bulldozed and such stones that were still serviceable were used in the reconstruction on higher ground.

The replica was dedicated as an area museum on May 31, 1985. The museum is open from 10 a.m. to 3 p.m. Saturdays, and 1 p.m. to 5 p.m. Sundays. Long-range plans call for reconstruction of other post buildings at the new site.