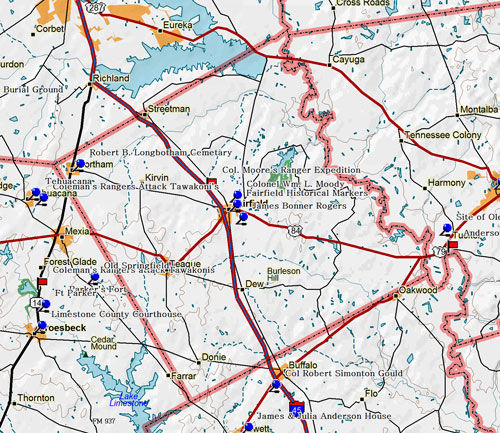 Marker Title: David Hall Love
City: Fairfield
County: Freestone
Year Marker Erected: 1971
Marker Location: Fairfield Cemetery, 300 block of S. Dunbar St. near E. Reunion St.
Marker Text: (January 12, 1816 - April 21, 1866) A Texas War for Independence veteran. At Battle of San Jacinto, April 21, 1836, he and 11 comrades captured 220 enemy soldiers, and on orders of Gen. Sam Houston he walked next day to Harrisburg with news of Texas victory. For military service he was granted 640 acres of bounty land, from which he later donated Fairfield townsite. He held offices in his church and as precinct justice. A native of Tennessee, he was married twice; had 8 children.

Marker Title: Colonel Wm. L. Moody
City: Fairfield
County: Freestone
Year Marker Erected: 1964
Marker Location: on north side of US 84 across the road from W. L. Moody Reunion Grounds, 1.3 mi. east of US 84/SH 75 intersection.
Marker Text: (1828 - 1920) Came to Texas from Virginia, 1852. Organized and was captain of Co. G, 7th Texas Infantry, the first Freestone County unit to go into battle in the Civil War. Captured at Fort Donelson, Tenn., Feb. 1862. exchanged, soon won promotion to colonel for bravery on battlefield. Commended for personally leading and rallying men in hand-to-hand combat in thick woods. Wounded and returned to Texas, where he served till war ended. In 1866 moved to Galveston. Became leader in financial business, philanthropic and civic affairs.

They departed Parker's Fort in early August and moved northeast toward the Tawakoni Village. Twenty miles over the prairie they came to Post Oak Creek, a tributary to the Trinity River.

The officers were strict about keeping the men in line. From Captain George Barnett's ranger company, Privates Samuel McFall and George Erath darted far ahead of the rest of the volunteers on their horses. It was not, however, by their own choice, as Erath recalled.

"I was riding a young horse which had been caught a colt from the mustangs, that was fiery. When the order came to charge, it darted forward ahead of all the rest, and I found myself alone in the advance. Next came McFall, who was also on a wild horse, too eager for the fray. The officers shouted to us to come back into line, but our efforts to obey were in vain. Our steeds had determined to give us a reputation for bravery which we did not deserve." Erath's daughter recalled that this incident even helped earn her father the nickname "The Flying Dutchman."

The Indians scattered but the Rangers continued the pursuit. Though several Indians were encountered, the only fatality was that Ranger Moses Smith Hornsby was accidentally killed by Ranger William Magill.