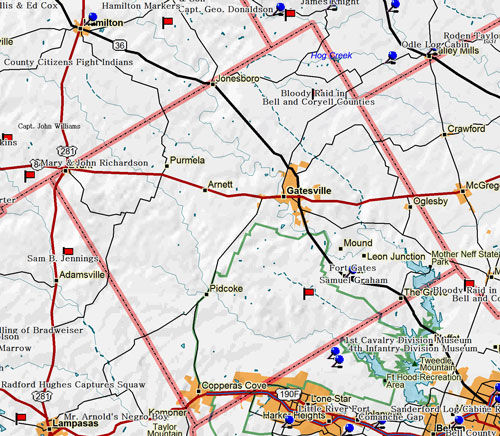 Marker Title: Fort Gates, Site of
City: Gatesville
County: Coryell
Year Marker Erected: 1936
Marker Location: From Gatesville, take US 84 U.S. mi SE (Marker is off roadside.)
Marker Text: First settlement in Coryell County. Established by Brevet Colonel W.R. Montgomery, 8th U.S.Infantry October 26, 1849, on the military post road between Austin and Fort Graham as a protection of the frontier against hostile Indians. Named in honor of Collinson R. Gates, gallant officer in the Mexican War. Abandoned in March 1852, as the frontier line had advanced further westward. Used as a place of defense by settlers during Indian raids. First county seat of Coryell County, February 4 - May 27, 1854 when Gatesville was established.

Marker Title: Gatesville
City: Gatesville
County: Coryell
Year Marker Erected: 1970
Marker Location: In front of City Hall, 8th & Sanders, Gatesville
Marker Text: County seat of Coryell County, Gatesville began in 1854 after the county was created. Richard Grant, an Indian trader and local landowner, donated the townsite. It was named for Old Fort Gates (1849-1852), which had been established 5 miles east for Indian protection. The Fort, named for U.S. Army major G.R. Gates, was the first settlement in the county. For a few months Fort Gates served as county seat, but then Gatesville was chosen. The County's first mail line--from Gatesville to Belton--was set up in 1855. The town grew slowly at first, suffering from intermittent Indian raids, but the period from 1870 to 1882 saw great progress. In 1870 the town was incorporated and in 1872 a courthouse was built. When St. Louis & Southwestern railroad ran a spur line to Gatesville in 1882, the citizens held a gala welcoming celebration. With the railroad came prosperity and many new homes and businesses. A fine opera house, frontier symbol of culture, was erected and numerous civic improvements were initiated. Today the town is the home of the Gatesville and Mountain View State schools for boys. The economy of the area is based on ranching and agriculture.

Marker Title: Grubb, Wiley Parker (1846 - 1918)
Address: Cemetery
City: Ireland
County: Coryell
Year Marker Erected: 1993
Marker Location: From Ireland, tke CR 182 s. 1.4 mi to Wiley P. Grubb Cemetery.
Marker Text: (May 19, 1846- January 23, 1918) Wiley Parker Grubb, the son of Jacob N. and Mary Ann (Wiley) Grubb, was born in Walker County, Texas. He joined the Texas Rangers in 1863 and in 1865 was wounded at the battle of Dove Creek near present day San Angelo. He married Georgia Hester in 1872. In 1874 he bought land here in Coryell County from his father where he ranched and became a prominent landowner. Approximately 2 acres surrounding Grubb's grave site were deeded as a public cemetery in 1937.

Marker Title: Mother Neff State Park
City: The Grove
County: Coryell
Year Marker Erected: 1968
Marker Location: From The Grove, take SH 236 about 6 mi NE to Park Road 14 then follow west 1 mi to Park entrance.
Marker Text: First official state park in Texas; suggested the idea for the State Parks system. Originated with a 6-acre plot willed to Texas in 1916 by Mrs. Isabella E. Neff, mother of Pat M. Neff, Governor of Texas (1921-1925) Because Texas then had no state parks, Mrs. Neff stated the land was to be used for religious, fraternal, political, and educational activities. Seeing the need for more such areas, in 1923, the 39th Legislature created the State Parks Board. In 1934 Pat Neff deeded 250 acres, and other owners 3 acres, to enlarge the original tract.

Marker Title: Ogletree Stagestop and Post Office
Address: US 190 right-of-way, 1 mi. S
City: Copperas Cove
County: Coryell
Year Marker Erected: 1979
Marker Location: From Copperas Cove, intersection of Hwy 190 & FM 116 N, take Hwy 190 west about 1.2 mi.
Marker Text: After Marsden Ogletree (1819-1896) and his family migrated from Georgia, he recieved a land grant in 1878. Inscriptions on two stones in this house indicate the structure was erected the same year. It served as the family home, grain store, and stopping place for the Lampasas to Belton stagecoach. Since the mail arrived by stage, a post office was opened here in 1879 with Ogletree as postmaster. Legend says that the settlement received the name "Coperas Cove" from a copperas-tasting spring in the cove of a nearby mountain. Samuel Gilmore served as the second Postmaster. In 1881 Gilmore's father-in-law Jesse M. Clements (1822-1900) and his wife Charley deeded land for the right-of-way to the Gulf, Colorado & Santa Fe Railroad. The following year the railroad laid out the new townsite of Copperas Cove. Soon the center of the community, including the post office, moved over to the railroad. Later the town corrected the spelling of its name to "Copperas Cove." In 1891 Clements bought this house and used it as the headquarters for his large ranching operations. The old stone stagestop remains a visible link with the community's pioneer heritage.

Charlie Elam and his five children lived near his father-in-law, William Moorehead, on Henson Creek southwest of Gatesville. Early one morning he and his son, W.J., went out to find the oxen. After searching nearly all day, Mr. Elam told his son he could return home, but that he himself would come in later. That evening, however, he was massacred by the Indians, and it is generally supposed that a part of the original Indians who massacred the Jackson family, did the deed. Mr. Elam was massacred near the headwaters of Henson Creek, about nine miles southwest of Gatesville.

Ref.: Before writing this article, the author conferred with B.F. Gholson, and others who were familiar with the circumstances. Seventy Years in Texas, by J.M. Franks.

During 1861 it was discovered the Indians were raiding in Coryell County. Consequently, Curran Richardson, Ike Richardson, James Wylie, Wm. Study, Brazier and about five others rushed to Lookout Mountain near the present village, Ferry, to waylay the Indians as they left the settlements. In due time, the savages arrived and the citizens killed five of the seven savages.

We received the following e-mail concerning this story:

Hi there- Love your site! It is a continual inspiration to me and I thank you! I wanted to let you in on a tiny misspelling that might help you find the location of a bloody indian raid site.... It talks about the town of "Ferry" - but I think you mean the town of "Fairy" - located 20 miles outside of Jonesboro - and in close locale to coryell county.

Maybe that helps? Again, thanks again for a great site! Megan Harris