Killing of Williamson and Escape of Hendrickson

Killing of Williamson and Escape of Hendrickson

These two gentlemen, who lived on the Cowhouse, near the present village of King, had been to the Williams ranch, perhaps in Mills County, to get three of their horses which the Indians had stolen sometime before, and had been recovered in a fight. The two stopped for the noon-day meal, in the Langford Cove near the present town of Evant. After dinner they had one of their horses shod. From Langford Cove the two citizens of the King Community rode away toward the east. One rode one horse, and the other led the two. When they reached Live Oak Gap, through which it became necessary for them to pass, and which was about seven miles from the present town of Evant, they encountered twelve Indians. Williamson, who was a middle-aged man, suggested that they dismount and fight, and in another second or two, he was on the ground. But it seems that Hendrickson became somewhat excited and suggested that they get on their horses and run. But the loop around the neck of the horse that Mr. Williamson was leading was tied to his saddle and could not be unloosened without considerable trouble. He then decided to fight it out. It seems, according to accounts, that Hendrickson rode rapidly away for further assistance. Most of the Indians remained to fight Williamson, but a few followed Hendrickson for a short distance. In a short time, Mr. Williamson was killed, and his death occurred April 12, 1863.

Note: Author interviewed B.F. Gholson and others who lived in that vicinity at the time. 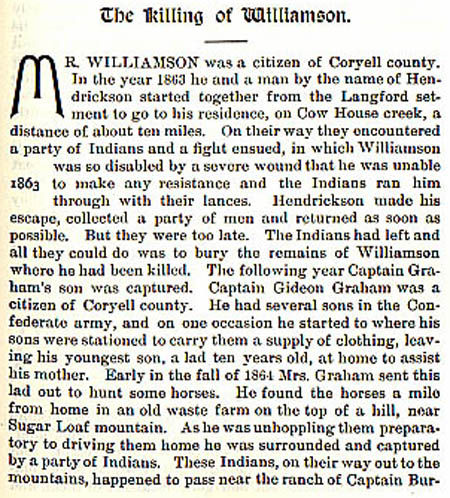