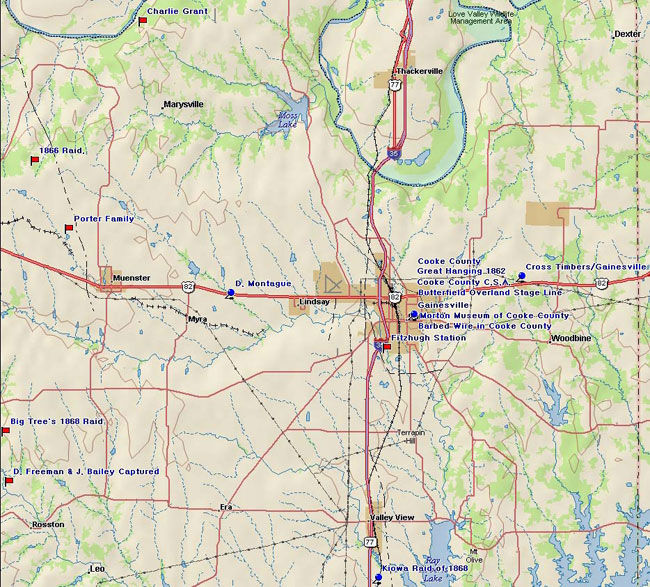 Marker Title: Barbed Wire in Cooke County
Address: 100 E. California
City: Gainesville
Year Marker Erected: 1986
Marker Location: 100 East California, Gainesville.
Marker Text: The development of barbed wire fencing had a revolutionary impact on the economy and settlement pattern in Texas. In 1874, Joseph Glidden of Illinois received a patent for his barbed wire. By 1875, Henry B. Sanborn had come to North Texas as Glidden's barbed wire salesman. Cleaves & Fletcher Hardware, once located at this site, and other Gainesville businesses began to stock Glidden's Barbed Wire as it came into demand by Texas ranchers. Sanborn's 1875 transaction with Cleaves & Fletcher may represent the earliest sale of two-stranded modern barbed wire in Texas. Texas Sesquicentennial 1836-1986.

Marker Title: The Cross Timbers
Address: US 82 roadside park
City: Gainesville
Year Marker Erected: 1970
Marker Location: From Gainesville take US 82 about 5 miles to roadside park on the south side of highway.
Marker Text: Two long, narrow strips of timber extending parallel to each other from Oklahoma to Central Texas; form a marked contrast to adjacent prairie. The more fertile East Cross Timbers begin here in Cooke County. Area was famous pioneer landmark as well as obstacle to travel because of its dense growth. It divided the hunting grounds of the Plains and East Texas Indians. Until 1870s it marked boundary of settlement, for Plains Indians avoided the timber. Forests' most important function was (and is) causing soil to retain water. (1970)

Marker Title: Great Hanging at Gainesville, 1862
City: Gainesville
Year Marker Erected: 1964
Marker Location: East of Elm Fork Bridge - SH 51 (south side of road), Gainesville. (This marker has been moved and is now located on east bank of Pecan Creek, between Main St. and California St. The marker at one time was located west of I-35, near Elm Creek. It was moved here a few years ago.)
Marker Text: Facing the threat of invasion from the north and fearing a Unionist uprising in their midst, the people of North Texas lived in constant dread during the Civil War. Word of a "Peace Party" of Union sympathizers, sworn to destroy their government, kill their leaders, and bring in Federal troops caused great alarm in Cooke and neighboring counties. Spies joined the "Peace Party" discovered its members and details of their plans. Under the leadership of Colonels James Bourland, Daniel Montague and others, citizens loyal to the Confederacy determined to destroy the order; and on the morning of October 1, 1862, there were widespread arrests "by authority of the people of Cook County." Fear of rescue by "Peace Party" members brought troops and militia to Gainesville, where the prisoners were assembled, and hastened action by the citizens committee. At a meeting of Cooke County citizens, with Colonel W.C. Young presiding, it was unanimously resolved to establish a Citizens Court and to have the Chairman choose a committee to select a jury. 68 men were brought speedily before the court. 39 of them were found guilty of conspiracy and insurrection, sentenced and immediately hanged. Three other prisoners who were members of military units were allowed trial by Court Martial at their request and were subsequently hanged by its order. Two others broke from their guard and were shot and killed. The Texas Legislature appropriated $4,500 for rations, forage used by State troops here during the unrest. (1964) More

Marker Title: Kiowa Raid of 1868 (SW Part of County)
City: Valley View
Year Marker Erected: 1968
Marker Location: From Valley View take IH-35 3 miles north to rest stop on east side of highway.
Marker Text: On Jan. 5-6, 1868, Chief Big Tree and 150 to 200 Kiowas raided Willa Walla Valley, Clear Creek and Blocker Creek. Burned homes; killed 13 people; scalped one woman alive. Captured 10 women and children; 3 escaped, 2 were ransomed. Raiders reached Elm Creek at Gainesville before blizzard forced withdrawal. More damage and deaths would have resulted if George Masoner had not become the "Paul Revere" of valleys and warned settlers of impending danger. Indian raids such as this one were in retaliation for loss of hunting grounds to settlers. (1968)

Marker Title: Montague, Daniel (First Cooke County Surveyor)
City: Gainesville
County: Cooke
Marker Location: from Gainesville take US 82 west about 7.3 miles to roadside park on south side of road.
Marker Text: (1793 - 1876) Born in Massachusetts. Moved to Texas 1836. Accepted post of surveyor, Fannin Land District, helping settlers locate claims and fight Indians. Joined Snively Expedition to capture Mexican traders trespassing in Republic of Texas, 1843, Captain of Company in Mexican War, 1846. When Cooke County was created, 1848, Montague was named County Surveyor. Like most surveyors, took land as pay for duty that called for constant risk of life. Rifles to stand off Indians were in field kits. Like Surveyor-Senator John H. Reagan, Montague was honored in having a county named for him.