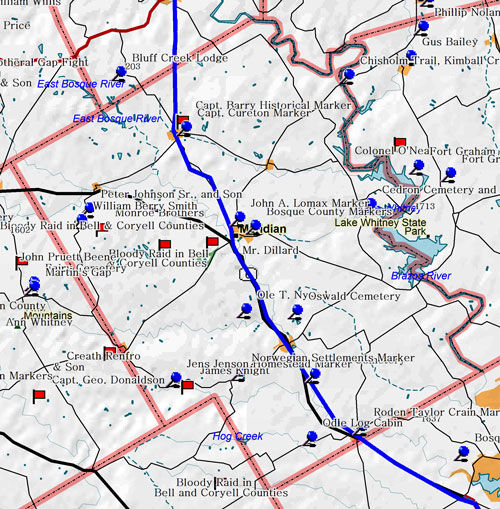 Marker Title: Bosque County
City: Meridian
Year Marker Erected: 1936
Marker Location: .7 miles west of Meridian on SH 22.
Marker Text: Named for the Bosque (Spanish for "woods") River. The territory now part of this county was traversed in 1841 by the Texan-Santa Fe Expedition. Maj. George B. Erath, noted surveyor and soldier, explored the region prior to its settlement. The first colonists established homes in 1850-51. Among the national groups who immigrated here were the English (at Kent), Norwegians (at Norse and elsewhere), and the Germans (in eastern part of county). Formally created and organized in 1854, Bosque county has traditionally had farming-ranching economy. The Chisholm cattle trail crossed the area in the 1870s. Erected by the State of Texas - 1973

Marker Title: Cedron Cemetery and School
City: Lakeside Village vicinity
Year Marker Erected: 1990
Marker Location: 5.2 miles south of Lakeside Village on FM 56.
Marker Text: Settlement of northeastern Bosque County began in the 1850s, as people traveling west through the area were attracted to the fertile lands along Cedron Creek. Among the first community projects of the new neighbors was the construction of a school building. A one-room cedar structure, it was also used for church and social gatherings. The original schoolhouse was replaced in the 1930s by a newer frame structure. Like its predecessor, it also served as a church and community center. The school was consolidated with other area schools in 1938, and the building later was dismantled. A community cemetery (about one-half miles west) was established on land adjacent to the school building. Although there may have been earlier, undocumented burials, the oldest marked grave is that of school teacher J.T. Hungerford (1844-1880), the apparent victim of tuberculosis. A few days after Hungerford's death, another community resident, Susan J. Arnold (1845-1880) was also buried in the graveyard. Since that time many area citizens have been interred there. Few residents remain in the Cedron vicinity. The cemetery and school building foundation are the last visible reminders of a once-thriving

Marker Title: Chisholm Trail, Kimball Crossing
City: Morgan vicinity
Year Marker Erected: 1963
Marker Location: from Morgan take SH 174 about 10 miles east to marker, located in Kimball Bend Park.
Marker Text: Kimball, one of the first towns in Bosque County, was established at this site in the early 1850s. One of the westward wagon routes forded the river at this crossing until a ferry was built in 1865. The famous Chisholm Trail made its major crossing of the Brazos here. During the 1870s tens of thousands of Texas longhorn cattle forded the river and were driven to northern markets. Building of barbed wire fences and railroads in the 1880s caused abandonment of the Chisholm Trail. Kimball, with no railroad and loss of the cattle trail, became a ghost town by the middle 1900s. (1971)

Marker Title: Roden Taylor Crain
City: Valley Mills
Year Marker Erected: 1987
Marker Location: Valley Mills Cemetery, NW of Valley Mills off SH 6.
Marker Text: (April 29, 1819-July 20, 1891) Tennessee native Roden Taylor Crain, a member of Capt. William Kimbro's Company of San Augustine County volunteers, was a soldier in the struggle for Texas Independence from Mexico. He fought at the Battle of San Jacinto on April 21, 1836, and later received a land grant and pension for his service. He settled on his land in present Bosque County, where he lived the rest of his life. He drowned in the Bosque River and was buried here in 1891. Recorded - 1987

Marker Title: Gary Cemetery
City: Clifton vicinity
Year Marker Erected: 1996
Marker Location: 4 miles south of Clifton on FM 2602 right-of-way.
Marker Text: South Carolina natives William and Rutha Gary migrated west with their family, and by 1852 settled in this area, then part of McLennan County. In 1854, when Bosque County was formed, William Gary was chosen as one of five county commissioners. Five Gary family members were among the voters in the first county election. William Gary died in 1855, followed by Rutha in 1868. Their graves formed the nucleus of this cemetery that grew slowly over the next sixty years. About 35 graves are marked; 25 more stones are not inscribed. The last burial occurred in 1932. (1996)

Marker Title: Jens Jenson Homestead
City: Clifton vicinity
Year Marker Erected: 1976
Marker Location: 13 miles west of Clifton, via 219 west to 182 north to Gary Creek Rd, (CO 4175) marker is in front of small ranch house 500 feet from CO 4175.
Marker Text: Jens Jenson (1835-1912) came to this county with his Norwegian parents and their family in 1854. Later he was a sailor berthed in Galveston for some years; he also served in the Confederate Army in the Civil War (1861-65). After he bought part of his parents' land in 1867, he built one stone room of this house and married Sarah Swenson in 1868. As his family grew to 11 children, he added rooms, three of stone, two of wood. After his death, a son, Palmer, bought the place. In 1958 grandson Arden Jenson purchased the land. He lives in the house, farming the ancestral acres. (1976)

Boyhood Home of John A. Lomax

Marker Title: Boyhood Home of John A. Lomax
City: Meridian
Year Marker Erected: 1970
Marker Location: from Meridian, take SH 144 north about 1 mile to marker in picnic area.
Marker Text: Only a log kitchen now marks the homesite of John Lomax, one of the foremost collectors of American folksongs. Here, on part of the Chisholm Trail, young Lomax heard cowboys crooning and yodeling to restless herds; African servants taught him jig tunes, chants, work songs, and calls; and on winter nights his family sang songs and swapped stories around a blazing fire. Lomax began to write down this music while still a boy; and when he left Bosque County at age 20, he carried with him a roll of cowboy ballads -- the nucleus of his lifelong work. (1970)

Marker Title: Norwegian Settlements in Bosque County
City: Clifton
Year Marker Erected: 1969
Marker Location: Intersection of FM 182 and FM 219, 7 miles west of Clifton.
Marker Text: Though never as numerous as some national groups emigrating from Europe, Norwegians left an imprint of rural life in Texas. Hundreds sailed to the United States beginning in the 1830's. For those who settled in Texas, Bosque County had great appeal, because with its woods, hills, and steep, sloping streams, it resembled parts of Norway. In 1854 Ole Canuteson started here what became Texas' largest Norse settlement. Until past the turn of the century, the Gary Creek valley settlers spoke mainly Norwegian and retained many customs of their homeland. (1969)

Marker Title: Odle Log Cabin
City: Valley Mills vicinity
Year Marker Erected: 1978
Marker Location: 5 miles west of Valley Mills via FM 217 to CR 3155 west to Odle Ln. (200 yards north of intersection of Odle Ln and CR 401).
Marker Text: A native of Tennessee, pioneer John Odle (1824-1913) moved to Texas in 1843, one year after his marriage to Lucinda Reeder (d. 1890). They came to this area in 1856 and built this cabin of oak logs about 1860. They occupied this structure until Odle could erect a more substantial rock house for their family of 13 children. During the Civil War (1861-1865), Odle served in a frontier ranger company and fought in the Battle of Dove Creek, January 8, 1865, against Kickapoo Indians. Recorded Texas Historic Landmark - 1978

Marker Title: Oswald Cemetery
City: Clifton vicinity
Year Marker Erected: 2000
Marker Location: 1.8 miles north of Clifton on FM 1991, then 0.5 mile east on FM 3221.
Marker Text: This cemetery, located on five acres out of the l. M. Armstrong survey, was already in use as a burial ground when the earliest original marked graves, those of three children of W.B. and E.H. Moore, were dug in the early 1860s. The original owner of the land was Captain Allen S. Anderson, a frontier scout who was interred here in 1864 when the site was known as Clifton Graveyard. His daughter, Flora Kemp, deeded it for use as a graveyard in 1877. M.J. Oswald purchased the land in 1885 and it became known as Oswald Cemetery. Burial in the cemetery has been free to people of all races. Among the pioneers interred here are early settlers of old town Clifton and several Civil War veterans. The Oswald family continues to own the land surrounding the cemetery at the dawn of the 21st century. (2000)

We are very fortunate to receive this e-mail including information and great pictures from Mike & Karla Smith, descendants of William Berry Smith.

We are decendants of William Berry Smith and have been to visit the Smith-Pitts Cemetery where he was laid to rest. This weekend we met a couple of farmers who pointed us in the right direction and we were able to find a ranch hand who took us to the cemetery.

The owner Mr. Carl Butts has erected a pipe rail fence to protect the cemetery from the cows and laid a gravel road for easier access. The Ranch Hand, Robert Sklar, pointed out the remains of an old "dog run" house, corn crib, well, pump and trough about 100 yards west, that are going to be torn down in the future. While lookin at the houses we did not find a chimney or an out house. The property is locked and permission needs to be granted. The Marker Ranch is The MAKER Ranch instead. The gate is white and just before mile marker #326 after the Maker ranch sign.

The Historical Marker reads Erected date 1957. William Smith's head stone reads Died June 20th and the Marker reads dies June 30th, 1876. Our adventure was most fun and I have enclosed some pictures.