Peter Cartwright Johnson and son, Peter Jr., who was ten years of age, had been to Meridian to the mill and for supplies, and were returning to their home, which was also in Comanche County. When they reached a point near Johnson's Peak in Hamilton County, which was about seven miles from the place where Mr. Beene and the African had been killed during the preceding day, they were attacked by Indians; Mr. Johnson killed and the boy carried into captivity. He was also driving oxen, and after his death, the Indians ripped open the sacks, poured the grain on the ground, and took the sacks away.

The Indians, as usual, after this massacre, took a northwesterly course, and when they reached a point about fifty or sixty miles distant, perhaps, somewhere in the present Callahan County, Peter Johnson Jr., the boy ten years of age, was stripped of a part of his clothing and turned loose to starve. His mother had always told him that in event he became lost, to follow the cows and they would pilot him home, and fortunately, to this point the Indians had also driven a number of cattle, one of which had been killed for beef. Among the cattle was an old gentle belled cow that the boys singled out as his temporary godmother. When the cows would stop and rest, so would Peter Jr., and when the cows traveled, he traveled. For nine days he wandered in the wilds of West Texas. Those early settlers the author interviewed concerning this affair differed about the details of Peter Jr.'s food while he was lost. One of the very best of authorities told the author that he had heard Peter Johnson Jr., himself say he suckled the old milk cow, and also milked milk in his mouth, and that this was all that kept him alive. But this is denied by other good authorities, who claimed that he subsisted on herbs while he followed the milk cows home. As to the correctness of these contrasting stories, we do not know. But the former seems exceedingly plausible, and is perhaps the first thing the boy would think to do.

After he had been lost for nine days, Dave Roberts and other cowmen accidentally came across Peter Johnson Jr., wandering through the woods at a point about six miles west of the present city of Dublin. When found he was so weak he was hardly able to walk, but he soon recovered and lived up until recent years, a valued citizen of Comanche County.

Further Ref.: Wilbarger's Indian Depredations in Texas; Early Days in Central Texas, by F.M. Cross; Indian Fights on the Texas Frontier, by E.L. Deaton; Seventy Years in Texas, by J.M. Franks, etc. The author drove several hundred miles to gather the facts for this and the preceding story. 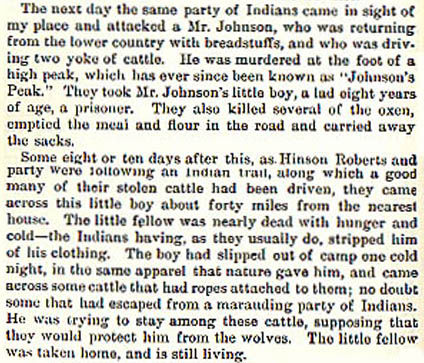