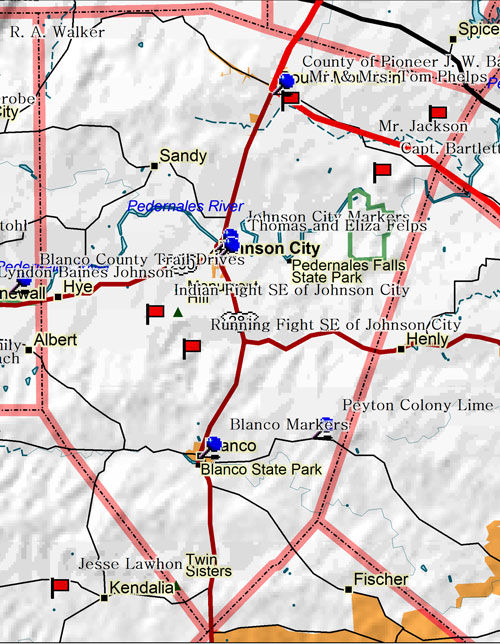 Marker Title: 1894 Blanco County Jail
City: Johnson City
Year Marker Erected: 1986
Marker Location: 7th Street and Avenue G, Johnson City (on county courthouse square).
Marker Text: Noting the unhealthy dampness of the basement where prisoners were first kept after the Blanco County seat was moved to Johnson City, the commissioners court ordered the construction of this jail facility in 1893. Completed the following year, the jailhouse was built of limestone by J.E.L. (Kergie) Dildine (1853-1925), a rock mason who came to Blanco County from Kansas in the 1880s. Despite an 1897 jailbreak, the facility has continued in use, with interior modifications to meet state jail standards. Texas Sesquicentennial 1836-1986

Marker Title: Blanco County Courthouse
City: Johnson City
Year Marker Erected: 1983
Marker Location: located on courthouse square (7th and G street) in Johnson City.
Marker Text: Designed by San Antonio architect Henry T. Phelps, the 1916 Blanco County Courthouse was the first permanent courthouse built after the seat of government moved from Blanco to Johnson City in 1890. Serving as contractor for the project was stonemason James Waterston, who had come from Scotland to Texas in 1883 to aid in the construction of the state Capitol. The Classical Revival limestone structure features Doric columns and a domed cupola. Recorded Texas Historic Landmark - 1983

Marker Title: Blanco County Trail Drives
City: Johnson City
Year Marker Erected: 1969
Marker Location: located on US 290 west, in front of Johnson Ranch Headquarters (Avenue N and Main Street, western edge of Johnson City).
Marker Text: From this headquarters site in the 1870s, the brothers J.T. and Sam Ealy Johnson started thousands of cattle up trails to Kansas and other shipping or market points. To the west, at Williamson's Creek, and at Deer Creek (southeast) the Johnsons had gathering and processing pens. They had largest individual trail driving outfit in Blanco and six nearby counties, sending north several herds of 2,500 to 3,000 each season. Sam Ealy, the younger Johnson brother, is known to history as grandfather of 36th president of the United States, Lyndon Baines Johnson. (1969)

Marker Title: Thomas C. and Eliza V. Felps
City: Johnson City vicinity
Year Marker Erected: 1975
Marker Location: from Johnson City take US 290 9 miles southeast; Miller Creek Cemetery is east of US 290 (about 3 miles east on US 290, US 281 intersection) marker is near front and center of cemetery.
Marker Text: Born in Tennessee in 1836, Thomas C. Felps came to Texas in 1850 and to this area in 1856. He earned a living by freighting and joined the Blanco County Rangers during the Civil War. In 1863 he married Eliza V. White (b. 1846), a native of Ohio. In the summer of 1869, the couple lived with Eliza's parents while Thomas recovered from a fever. Her father, newly-appointed County Judge S.T. White, had gone to Blanco on July 21, 1869, when Thomas and Eliza were killed by a band of Indians on Cypress Creek. Only Eliza was scalped. The couple's orphaned children, Thomas and Caroline, were cared for by Eliza's parents. (1975)

Marker Title: James Polk Johnson
City: Johnson City
Year Marker Erected: 1989
Marker Location: 7th Street and Avenue L in Johnson city (Johnson Family Cemetery).
Marker Text: (August 24, 1845-October 20, 1885) A native of Georgia, James Polk Johnson came to Texas with his family and grew up in DeWitt County. Following his service in the Confederate army during the Civil War, he moved to Blanco County to join his uncles in the cattle business. He bought the business in 1871 and became successful in his own right. In 1879 he founded a new town, Johnson City, on the Pedernales River and was instrumental in its development. His dream of making Johnson City the seat of Blanco County was not realized until 1891, six years after his death. (1989)

Marker Title: L.B.J. Boyhood Home
City: Johnson City
Year Marker Erected: 1965
Marker Location: 9th and G Sts. in Johnson City.
Marker Text: Sam Ealy Johnson Jr. (1877-1937) and his wife Rebekah Baines Johnson (1881-1958) bought this residence in 1913. Sam, an educator and six-term Texas legislator, and Rebekah, an educator and journalist, raised five children here. The frame house was built in 1901, with simple Classical details and decorative bargeboards of milled wood. Each wing is one room deep for light and ventilation. Various porches, open and enclosed, indicate additions over the years. In 1937, the Johnson's eldest son, Lyndon (1908-1973), launched his first campaign for Congress, and his ascent to the U.S. presidency, from the east porch. Recorded Texas Historic Landmark - 1965.

Marker Title: Dr. James Odiorne
City: Johnson City
Year Marker Erected: 1972
Marker Location: 6th and Nugent, adjacent to Courthouse Square, Johnson City.
Marker Text: (1816-1887) Prominent pioneer physician, civic leader. Practiced medicine in Illinois and Kentucky before settling in Texas in 1857; moved to Blanco County in 1860. He was Civil War surgeon at Fort Mason, Tex. Served as commissioner and chief justice of Blanco County, 1860s; owned a newspaper, 1885-87. As doctor he went by horseback or gig, regardless of weather. Scarcity of drugs led him to use native herbs for medication; for a sedative (opium), grew and milked garden poppies. He died of burns when alcohol exploded during the compounding of medicine in his drugstore near this site. (1972)

Marker Title: Peyton Colony Lime Kiln
City: Blanco vicinity
Year Marker Erected: 1988
Marker Location: from Blanco take RM 165 8 miles northeast, located in roadside park on west side of road.
Marker Text: Peyton Colony was a freedmen's community established in the 1860s under the leadership of former slave Peyton Roberts. In addition to homes, the community included a local school and Mt. Horeb Baptist Church. This lime kiln was built by Peyton Roberts and his neighbors to provide high quality materials with which to make mortar for buildings in Blanco County, some of which remain today. The kiln was restored in the 1960s in conjunction with the construction of a roadside park at the site. It stands as a reminder of the efforts of ex-slaves to begin new lives. (1988) Incising: Restored by Blanco Lions Club.