'Captain Tumlinson was commissioned to raise a company on the Colorado, and early in January, 1836, he reported for duty with a company of sixty mounted men, myself included. We were assigned to duty on the head waters of Brushy Creek, some thirty miles northwest of the site of the present capital, that city not having been even projected then. The appointed rendezvous was Hornsby's station, then miles below Austin on the Colorado, from which place we were to proceed at once to our post, taking with us such materials as were necessary to aid us in the construction of a blockhouse. We were on hand at the appointed time and, just as we were preparing for our supper, a young white woman, an entire stranger, her clothes hanging in shreds about her torn and bleeding body, dragged herself into camp and sank exhausted on the ground. The feeling of rest and relief on finding herself among friends able and willing to help her, so overcame her overtaxed strength that it was some little time before she could give a coherent explanation of her situation. When she at length recovered, she told us that her name was Hibbons; that, in company with her husband, brother and two small children, she was journeying overland up to their home on the Guadalupe, when they were attacked by a band of Comanches; the two men were killed, the wagon plundered, and herself and children made prisoners; she being bound onto one of their mules and her little three-year-old boy on the other.

'The other child was a young babe, and the poor little creature, whose sufferings the mother could not allay, cried so continuously that at length one of the Indians snatched it from her and dashed its brains out against a tree.

"The scene of the attack being a lonely spot on a lonely road, the cunning Native tribespeople knew there was little risk of the outrage being discovered til they were beyond the reach of pursuit; so, when a cold norther met them at the crossing of the Colorado about where the city of Austin stands, they sought the shelter of a cedar brake and lay by to wait for it to subside. Confident that Mrs. Hibbons could not escape with her child, and trusting to her mother's love to prevent her leaving it, the Indians allowed her to lie unbound, not even putting out guards. It was bitterly cold, and, wrapping themselves in their buffalo robes, they were soon sound asleep. But there was no sleep for Mrs. Hibbons. She knew, as did her captors, that there was small hope of rescue from the discovery of her murdered relatives, and, realizing that the only hope lay in herself, she resolved to escape and to rescue her child. There was no time to lose, as another day's travel would take her so far beyond the reach of the settlements that it would be impossible for her to procure help before the savages reached their stronghold; so she waited until assured by their breathing that her captors were asleep, then, summoning all her courage, she carefully tucked the robe about her sleeping child and stole away, leaving him to the mercy of the brutal barbarians.

'She felt sure the river they had crossed was the Colorado, and knew there were settlements below; how far down she had no idea, but that seeming to offer the only means of escape, she made straight for the river, hiding her tracks in its icy waters, hurried away as fast as the darkness would permit.

'Once she thought she heard her child call, and her heart stood still with fear that the Indians would be awakened and miss her. She momentarily expected to hear a yell of alarm, and, not daring to leave the shelter of the bottom timber, she meandered the winding stream, sometimes wading in the shallow water along the edge, and again working her way through the brush and briers, tearing her clothing and lacerating her flesh, never pausing in her painful journey til late in the afternoon, when she came upon the first sign of civilization in some gentle cows feeding in the river bottom.

'Perceiving that they were milk cows, she felt that she must be near a white settlement, but she dared not attempt to call assistance lest the Indians be in pursuit; so she secreted herself near the cows, which she surmised would soon be going home, and waiting till they had finished their evening meal, followed them into the station, having spent nearly twenty-four hours in traveling a distance of only ten miles on open ground.

'Fortunate, beyond hope, in finding the Rangers there, she implored us to save her child, describing the mule he rode, the band of Indians, and the direction they were traveling.

'Hastily dispatching our supper, we were soon in the saddle, and with a trusty guide (Reuben Hornsby), traveled on till we judged that we must be near the trail, and fearful of crossing it in the darkness, we halted and waited for daylight. As soon as it was light enough, our scouts were out and soon found the trail, fresh and well defined as if the marauders were exercising neither haste nor caution in their retreat; having no doubt spent a good portion of the previous day in a fruitless search for their prisoner. They did not seem to be at all alarmed as to the consequence of her escape, and it was about 10 o'clock in the morning when we came upon them, just preparing to break camp. Taken completely by surprise, they broke for shelter of a cedar brake, leaving everything except such weapons as they hastily snatched as they started. I was riding a fleet horse, which, becoming excited, carried me right in among the fleeing savages, one of whom jumped behind a tree and fired on me with a musket, fortunately missing his aim. Unable to control my horse, I jumped off him and gave chase to my assailant on foot, knowing his gun was empty. I fired on him and had the satisfaction of seeing him ball. My blood was up and, leaving him for dead, I ran on, loading my rifle a I ran, hoping to bring down another. A limb knocked my hat off and one of my comrades, catching a glimpse of me flying bareheaded through the brake on foot, mistook me for a Comanche and raised his gun to check my flight; but, another Ranger dashed the gun aside in time to save me. The brave whom I shot, lay flat on the ground and loaded his gun, which he discharged at Captain Tumlinson, narrowly missing him and killing horse; when Conrad Rohrer ran up and, snatching the gun from the Indian's hand, dealt him a blow on the head with it, crushing his skull.

'The other Indians made good their escape into the cedar brake, where it was worse than useless to follow them; but, we got all their horses and other plunder, and , to crown our success, we achieved the main object of the expedition, which was the rescue of the little boy, though the heedlessness of one of our men came near robbing us of our prize in a shocking manner. The Indians, careful of the preservation of their little captive-they intended to make a good Comanche of him-had wrapped him up warmly in a buffalo robe and tied him on his mule preparatory to resuming their journey. When we rushed upon them they had no time to remove him, and the mule, being startled by our charge, started to run, when one of our men, not seeing that the rider was a child, gave chase and, putting his gun against the back of the boy, pulled the trigger. Fortunately the gun missed fire. He tried again with like result. The third time his finger was on the trigger when one of the other boys, perceiving with horror the tragedy about to be enacted, knocked the gun up, it firing clear, sending a ball whistling over the head of the rescued child. Providence seemed to have interposed to save him. The boys held an inquest on the dead Indian and, deciding that the gunshot would have proved fatal, awarded me the scalp. I modestly waived my claim in favor of Rohrer, but he, generous soul, declared that, according to all rules of the chase, the man who brought down the game was entitled to the pelt, and himself scalped the savage, tying the loathsome trophy to my saddle, where I permitted it to remain, thinking it might afford the poor woman whose family its owner had helped murder, some satisfaction to see that gory evidence that one of the wretches had paid the penalty of his crime. That was the only Indian I ever knew that I shot down, and, after a long experience with them and their success at getting away wounded, I am not at all sure that that fellow would not have survived my shot, so I cant say positively that I ever did kill a man, not even an Indian.

'The scene of the rescue was on Walnut Creek, about ten miles northwest of Austin. Gathering up our booty, which was inconsiderable, we started on our return, and late in the afternoon rode into the station in triumph. There was a suspicious moisture in many an eye long since a stranger to tears, when the overjoyed mother clasped her only remaining treasure to her heart, and I could not help stealing a glance at Rohrer, and trying to image what his feelings would have been had not his gun refused to obey his murderous behests. The little one was too much dazed and bewildered by the many strange scenes through which it had passed so rapidly, to even know its mother…

"We went on up to our appointed station, where we built the old Tumlinson blockhouse, making it our headquarters till the invasion of Santa Anna necessitated our recall, after which it was burned by the Indians and never rebuilt. And, save this old dismantled hulk, there is not, to my knowledge, one of those old Tumlinson Rangers now living.'…

J.W. Wilbarger, in his book Indian Depredations in Texas, gives a detailed version of the capture and escape of Sarah Hibbons below: 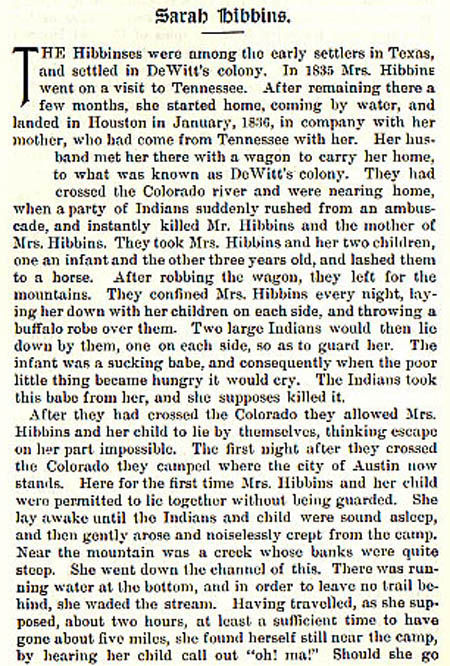