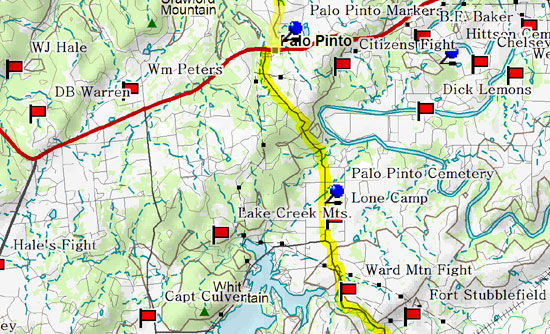 The Palo Pinto Jail Museum is worth the visit and a call in advance is recommended. The Rowe-Maddox cabin has been moved to the grounds that sit adjacent to the museum.

To the west, about where Hwy. 16 intersects 180, just below the D.B. Warren battlesite, is Metcalf Gap. Those coming north from Strawn on the Texas Fort Trail catch the Ghosts of the Cross Timbers road trip at Metcalf Gap. The deep cut in the limestone at Metcalf Gap was part of the road improvements made in 1955. Several skeletons of what were assumed to be Indians killed in combat were found in some deep crevices.

Highway 180 crosses Dodson Prairie a little further to the east. William Peters was killed to the north and Fred Colley was killed to the south. Northeast of the intersection with 919 is the original homestead of pioneer rancher Roy Hittson. He and his brother Jack, along with Goodnight and some other Rangers, moved into the abandoned buildings at Camp Cooper when the Civil War broke out. About a decade later, Roy led a group of angry North Texas ranchers to New Mexico where, at gunpoint, they confiscated their cattle which had been sold to Comancheros by the Comanches.

Southeast of Palo Pinto lies the Hittson Cemetery and a historical marker to the old Ranger, Jesse Hittson.

In 1878 at the Rowe-Maddox home, set to the north of Hittson's place, the men were away helping Reverend Slaughter build a church. The women, as was the custom, fed and allowed two passing strangers to spend the night. Nervous, they spent a sleepless night locked in their bedroom, armed with a shotgun and an ax. The next morning the men had breakfast and were on their way. Mrs. Rowe found a ten dollar gold piece they had left under a plate. Mr. Rowe returned the next day with exciting news that Sam Bass and a member of his gang had been seen passing through the county the day before.

Another four miles east, the highway crosses Eagle Creek where to the north lies a beautiful piece of land J. Carroll McConnell claimed to be the most scenic spot in the state and was originally settled by Calvin Hazlewood. Eventually the spot became a public park called Lover's Retreat, but it has been closed to visitors since the 1930s.

Continue traveling south from Palo Pinto on 4. This is a great drive; the road drops dramatically to the base of Ward Mountain.