Palo Pinto, roughly translated "painted stick," refers to the spotted oak which is abundant in this area. It remains the county seat of this beautiful pioneer ranching and trail driving country.

Possum Kingdom lies to the northwest and includes a stop to view Goodnight/Loving's gathering pasture. You can take Hwy. 4 N five miles to find the marker for another pioneer cattleman, George Webb Slaughter. A little further north you cross the Brazos, and you'll notice on the map a red dot to the east, which marks the site where Choctaw Tom and his band were killed. This incident is significant because in 1835, Tom led an attack on Bastrop which many attribute to bringing the Comanches into the war. It was over twenty years later when he was killed on the Brazos, and many attribute that event to starting the Indian wars in North Texas. What is most important is that he and his band were peaceful residents of the Brazos Reservation, which was forced to close as the fighting ensued. 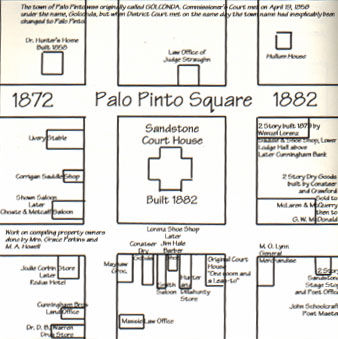 Diagram from the book, Painted Pole, by Barbara Belding Gibson

The Palo Pinto jail and museum are certainly worth a visit, and Hwy. 4 to the south may be the most beautiful drive in this part of the world. Stop in the little store at Lone Camp. An electric train passes overhead by handpainted landscapes all the way around the store. Also, don't forget to visit the newly reopened Palo Pinto Cafe located at 108 S. 6th Ave. Their phone number is 940-659-2458. 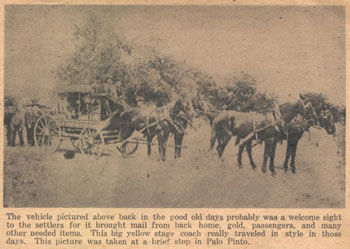 Hwy. 4 continues south along Palo Pinto Creek. The legendary Ranger Big Foot Wallace was here in 1837 and claimed the trees produced the best pecans he had ever eaten. 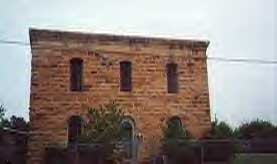 BE SURE TO CALL BEFORE GOING!!

Will be open for tours during weekends in the summer season.