Take 16 north to Loving, turn right and go 4.2 miles to the east. You will see a culvert that carries water from Cameron Creek under Highway 114. Just to your south, Lone Wolf scored his revenge coup on the unfortunate Trooper Bailey. The creek originally bore its Scottish spelling, Cambren, after the family that lived to the northeast and was attacked in the 1858 massacre. 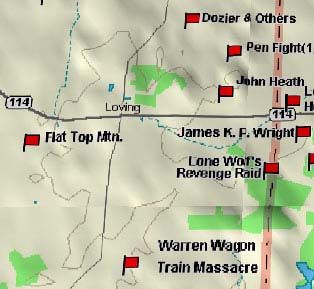 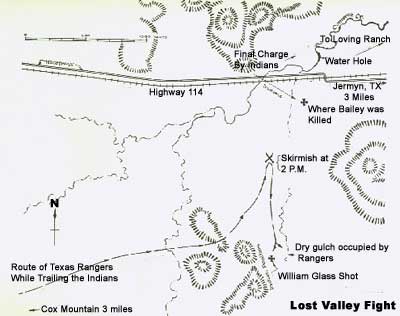 Click on the map (drawn with the aid of eyewitnesses)
for the complete history of the battle!
From the book, Carbine and Lance, The Story of Old Fort Sill

Lone Wolf had successfully lobbied United States Congress on behalf of Satanta and Big Tree, who were imprisoned for leading the Warren Wagon Train Massacre. In 1873 he was not only able to free the Kiowa chiefs but also the hundred or so Comanches captured by Mackenzie's raiders at Mo-Way's Quahida village the year before. He even wrangled a train trip to Washington, D.C. and commemorative medals for the whole group. 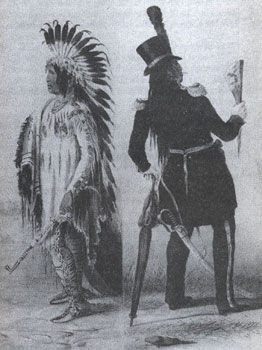 Going to Washington-Returning to His Home. A portrait by George Catlin.
From the New York Public Library.

In 1874, the Quahidas and other wild bands came off the Plains to join a Sun Dance on the edge of the Fort Sill reservation. A Comanche prophet (a rarity) named Ish-Ta-Ma emerged claiming he could make the warriors bullet proof and his bowel movements would provide brass rifle cartridges. After the celebration, bands of the different tribes scattered out, eager to raid the whites in what became known as the Red River War. Dozens of encounters followed, including Quanah leading a large contingent of the combined tribes against the hated buffalo hunters at Adobe Walls. Billy Dixon, Bat Masterson and a few dozen other buffalo hunters successfully defended the old trading fort. Quanah was wounded several times and had at least one horse shot out from under him.

During this time Lone Wolf was nursing a bitter hatred; his son and nephew had recently been killed in battle and this new war provided an opportunity for revenge.

Texas legislature authorized a battalion of Rangers at the outbreak of the war. Jones' newly formed troop of Rangers were surprised by Lone Wolf's Kiowas and found themselves cut off from the water hole on Cameron Creek. 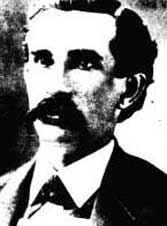 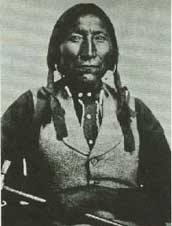 Lone Wolf holding the pipe hatchet he used to wreak his revenge for the loss of his son and nephew. 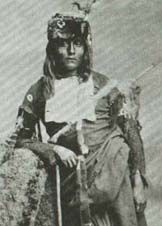 ...“When I got to the place where they had killed the other ranger, I learned that Dohauson had thrust him off his horse with a spear, but that Mamaday-te had made first coup by touching him with his hand. Lone Wolf and Maman-ti and everybody was there. Lone Wolf got off his horse and chopped the man’s head to pieces with his brass hatchet-pipe. Then he took out his butcher knife and cut open the man's bowels. Everyone who wanted to shot arrows into it or poked at it with their lances.

“Presently Lone Wolf stood back to make a speech. He said, ‘Thank you, Oh thank you, for what has been done today. My poor son has been paid back. His spirit is satisfied. Now listen! It was Mamaday-te who made the first coup. Because of this, and because he loved my son, I am going to honor him today. I am going to give him my name. Everybody listen! Let the name of Mamaday-te stay here on this battleground. Let the name of Mamaday-te be forgotten. From now on call him Lone Wolf!”

"After Lone Wolf had finished his talk, we all sang a few verses of the Victory Song, then got on our horses and started home.”

The above story is from the book, Carbine & Lance, The Story of Old Fort Sill, by Colonel W.S. Nye; Copyright © 1937 by the University of Oklahoma Press. Reprinted by permission. All rights reserved.