Marker Title: Hittson Cemetery
City: Palo Pinto
Year Marker Erected: 1982
Marker Location: from Palo Pinto, take Highway 180 east about 3 miles to Pleasant Valley Road and follow about 6 miles to Hittson Cemetery.
Marker Text: This burial ground (.2 miles north) first served the family of pioneer settler Jesse Hittson (1801-61). A native of Virginia, Hittson moved to this area in 1855 and began raising cattle. His land, located on an important early Brazos River crossing, became known as Hittson Bend. In 1857 he actively participated in the formation of Palo Pinto County. His grave is the earliest marked at this site. Five generations of Hittsons are buried here. Graves include those of family members who also became prominent leaders of the cattle industry and who led in the development of the area. (1982)

June 30, 1866, Jno. Hittson vacated his home at old Ft. Davis, a citizens' fort in Stephens county, and moved to the vacant government building at old Camp Cooper. Here he was soon joined by his brother, Wm. Hittson. Shortly afterwards, the two brothers, accompanied by Jess Hittson, a youthful son of Jno. Hittson, Press McCarty, and Freeman Ward, an ex-African slave, (who formerly belonged to James Ward), while cow-hunting on Tecumseh Creek, about three miles north of old Camp Cooper, in Throckmorton County, were assaulted by a large band of Indians. Press McCarty, riding a fleet horse, ran away from the others, and when he rode into old Camp Cooper, reported that Wm. and Jno. Hittson and companions had been killed.

During the race for life, the African, Freeman Ward, dropped his hat, and when he stopped to pick it up, the savages succeeded in crowding him so closely, they ran into the rocks, where his horse fell. Here the African was quickly slaughtered. Jno. Hittson placed his son, Jess on his horse behind his saddle, for fear that Jess's pony might become unmanageable. Wm. and Jno. Hittson, with Jess behind his father, then ran east about one and one-half miles, until they struck a little cliff along a creek, that emptied into Tecumseh. Here the Hittsons dismounted their horses and sought shelter under the bluff. It was about noon, and they were soon surrounded by a large number of savages. The little cave in the cliff, in which Wm., Jno., and Jess Hittson hid, was only barely large enough to shelter them from the Indian's arrows and rocks that were rolled and shot from above. In a short time the Hittson's horses were killed and the savages succeeded in knocking a sight off of one of their guns, which projected from under the cliff.

During their exciting chase to this cliff, Jno. Hittson was wounded with an arrow in the thigh, and Wm. Hittson received a flesh wound in the hip. Wm., Jno., and Jess Hittson remained in their narrow place of concealment until dark. They then walked into old Camp Cooper about two miles away. Needless to say, their families were joyfully surprised, for they sincerely felt their husbands and fathers had been killed.

The African was buried where he fell, and a wire fence today, passes over his grave.

Note: Author personally interviewed Jess Hittson mentioned above, J.B. Matthews, who lived in that section at the time, and who owns the land where this episode occurred; also interviewed Jack and Roy Hittson, sons of Wm. Hittson, W.D. and Ben Reynolds, Jno. Erwin, Lish Christeson, and others who lived in this section of the state at the time.

Further Ref.: The Biographical Sketch of William Hittson, in the Cattle Industry of Texas.

Ty Cashion gives his version of the story in the book, A Texas Frontier. 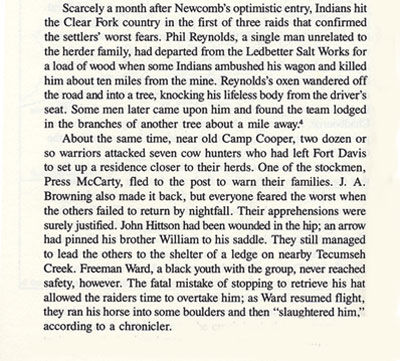