In August of 1856, young Cheyenne and Arapaho warriors stopped a mail coach on the Platte Trail and demanded some tobacco. The driver was wounded as he raced to make his escape. The older Cheyenne warriors whipped the youthful braves for their act, which violated the Fort Laramie Treaty, but the army retaliated, killing ten Cheyenne and wounding others. 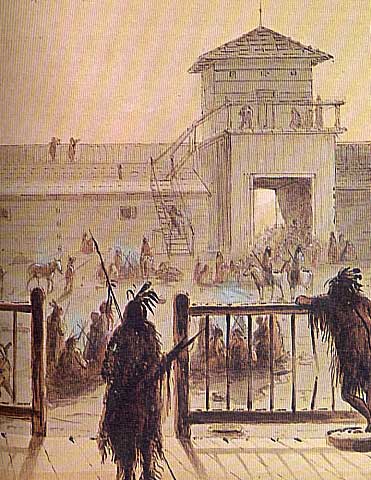 To avenge this action, the Cheyenne killed several emigrants along the Platte Trail. Colonel Edwin V. Sumner led a column under Major John Sedgwick up the Arkansas and led another column up the Platte River. He consolidated his forces on Cherry Creek near Denver, Colorado and with Fall Leaf, a noted Delaware, as his guide, he then headed eastward into western Kansas. Pushing ahead with his cavalry, he was met by a large contingent of Cheyenne warriors in a long, well-formed line. The medicine men had told the Cheyennes that if they dipped their hands in a nearby lake they would be invulnerable to the bullets of the soldiers but they were completely unnerved when Sumner ordered a saber charge. The Cheyenne loses were less than ten killed while Sumner's command had two killed and several wounded. Among those wounded was a young lieutenant named Jeb Stuart who would gain fame as a Confederate general in the upcoming Civil War.

Additional Battles In This Area