The Trial of Satanta and Big Tree 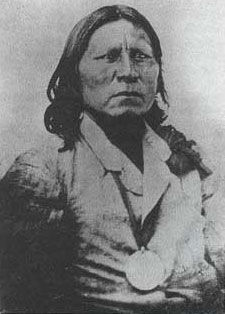 Satanta and Big Tree were safely carried to Fort Richardson, and there securely imprisoned in the guardhouse at the post. It was, of course, necessary to keep them under a heavy guard. The trial of Satanta began July 4, 1871. Judge Charles Seward was on the bench, and Governor S.W.T. Lanham, of Weatherford, District Attorney. The Court appointed Thomas Ball and J.A. Woolfork to represent the defendants. A severance was granted by the Court, and Satanta tried first. T.W. Williams, John Cameron, Evert Johnson, H.D. Varner, F. Cooper, Wm. Hensley, John H. Brown, Peter Lynn, Pete Hart, Daniel Brown, Lucas P. Bunch, and James Cooley constituted the jury that tried Satanta. Col. McKenzie, agent Tatum, and Thomas Brazeale, who was wounded, were important witnesses against the Indian chief. The attorneys for both the State and defense made eloquent speeches, and the trial was one of the most spectacular court proceedings ever held in the United States, and conducted in a little frontier courthouse, in a little frontier town. Jacksboro, however, just at that particular time, was enjoying considerable prosperity on account of the local military post. People traveled many miles to hear the trial, and according to reports, standing room could hardly be found in the court house. Satanta, himself, was allowed to speak, and his speech, which was interpreted, in substance, as follows:

"I cannot speak with these things upon my wrists, (Holding up his arms to the iron bracelets) I am a female tribesperson. Has anything been heard from the Great Father? I have never been so near the Tehannas (Texans) before. I look around me and see your braves, female tribespeople and papooses, and I have said in my heart, if I ever get back to my people I will never make war upon you. I have always been the friend of the white man, ever since I was so high, (indicating by sign the height of a boy.) My tribe has taunted me and called me a female tribesperson because I have been the friend of the Tehannas. I am suffring now for the crimes of bad Indians - of Satauk (Satank) and Lone Wolf and Kicking Bird and Big Bow and Fast Bear and Eagle Heart, and if you will let me go I will kill the three latter with my own hand. I did not kill the Tehannas. I came down to Pease River as a big medicine man to doctor the wounds of the braves. I am a big chief among my people and have great influence among the warriors of my tribe - they know my voice and will hear my word. If you will let me go back to my people I will withdraw my warriors from Tehanna. I will let them all across the Red River and that shall be the line between us and the palefaces. I will wash out the spots of blood and make it a white land and there shall be peace, and the Tehannas may plow and drive their oxen to the banks of the river - but if you kill me it will be like a spark in the prairie - make big fire - burn heap!"

We only regret that space will not permit the publication of speeches of S.W.T. Lanham, and the other attorneys.

Satanta was given the death penalty.

The trial of Big Tree immediately followed, and he too, was punished accordingly. Upon recommendation, for fear of Indian uprising, Gov. E.J. Davis commuted their sentences to life imprisonment.

Then August 19, 1873, Gov. Davis upon recommendation of President Grant and others, paroled the Indians to their tribes. Consequently, they were escorted from Hunstville back to the reservation but their conduct was such, their paroles were soon revoked, and Satanta then returned to the penitentiary, November 8, 1874. Big Tree who also disregarded his parole, escaped, but Big Bow was sent to the penitentiary as his hostage. Concerning the conduct of Satanta and Big Tree in the Huntsville penitentiary, Col. Thomas J. Goree, the superintendent, reported as follows:

"Previous to his parole, Satanta did very little work - sometimes picking wool and pulling shucks for mattresses, but only working when inclined to do so. Since his return to the prison he has done very little work with the exception of bows and arrows. He is in bad health and suffers from rheumatism, and very often goes to the dispensary for medicine. He begs tobacco from the prisoners, visitors, and everyone he sees, very often sitting up all night chewing it. He has never worked outside the prison.

"Before parole, Big Tree worked constantly bottoming chairs, and became very expert, and could put in as many or more cane bottoms as any other hand. Big Tree was punished once, by being placed in the stocks, for being disrespectful to a guard. Satanta had never been punished. Both were very found of tobacco and whiskey. Satanta was and is very much addicted to the use of opium, and I have been informed that he has used it for fifteen or twenty years. He prefers opium to whiskey."

W.A. (Bud) Morris and Joe Bryant, of Montague County, conversed with Satanta while in the penitentiary. W.A. Morris also had several conversations with Satanta. June 19, 1878, Satanta asked Mr. Morris if he thought the government would ever release him, and when Mr. Morris replied in the negative, Satanta looked somewhat despondent. The next morning, this wild old warrior of the plains, who, perhaps, felt his case was hopeless, committed suicide by jumping from his window.

What effect, if any, did the arrest and imprisonment of these two chiefs have upon their tribes? Lawrie Tatum, the Indian agent at Ft. Sill, said:

"The effect of arresting some of the leading Kiowas and sending them to Texas to trial, has been to more effectually subdue them, than they have ever been before. On my requisition sent, they have delivered to me, forty good mules and one horse to replace the forty-one mules shot during the fight, and stolen during the Satanta raid."

He also recommended that some of the Comanche tribes, who still lived on the plains, and were unsubdued, be forced on the reservation. As long as they were there, depredating on the settlements, and encouraging the reservation Indians to do accordingly, the Indian hostilities would not cease.

The tour of General Sherman, and the subsequent arrest of Satanta and Big Tree was the beginning of the ending of Indian hostilities, along the West Texas frontier. To be sure, a few years transpired before the Indians were finally subdued. But beginning with this tour of inspection there was a radical change in government policies toward the Indians of Texas and Southwest.

Further Ref: Smythe's Historical register of Parker Co.; Five Years a Cavalryman, by H.H. McConnell; Lawrie Tatum's reports of the trial and arrest of the chiefs, as found in the report of the Commissioner of Indian affairs for 1871. Also report of Gen. J.J. Reynolds, in the report of Sec'y. of War for 1871.