J.P. Ragle and Lewis Jackson, who lived in the Strickland community about twelve miles northeast of Burnet, left home in a wagon drawn by oxen about one o'clock in the evening for Morgan's Mill, located about eight miles northwest of Burnet. The wagon was loaded with corn to be ground and the two took necessary provisions to spend the night. They had only gone about one or one and a half miles, however, from the Ragle home, when ambushed and almost instantly killed, by a large number of Indians. The warriors then cut the corn sacks and poured approximately fifteen bushels of corn upon the ground. Not being content with that they shot the oxen with arrows.

The Indians then went about one mile farther west and ran upon Lorenzo Holland, Marcus Scaggs and his brother, Benton Scaggs, age about eighteen, twelve and ten years respectively. Lorenzo Holland was killed almost instantly, and a ball from an Indian's rifle pierced his brain from temple to temple. It has been generally supposed that the shot was fired with the gun of Mr. J.P. Ragle. Marcus Scaggs was also wounded in the leg and Benton, the ten year old boy, made his escape after several times firing his six-shooter. Benton was under the impression that he wounded an Indian. He then hurried on toward the home of J.P. Ragle, and on his way saw the bodies of Mr. Ragle and Lewis Jackson. When he reached the Ragle home, he related to Mrs. Ragle the sad news concerning the death of her husband. Marcus Scaggs recovered from his wound, sustained the 20th day of February 1863. 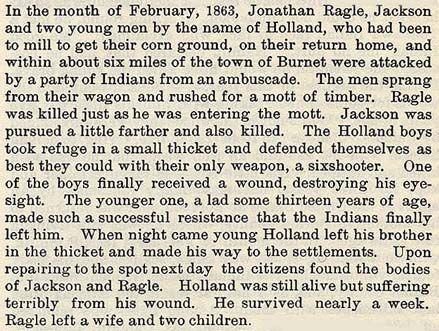