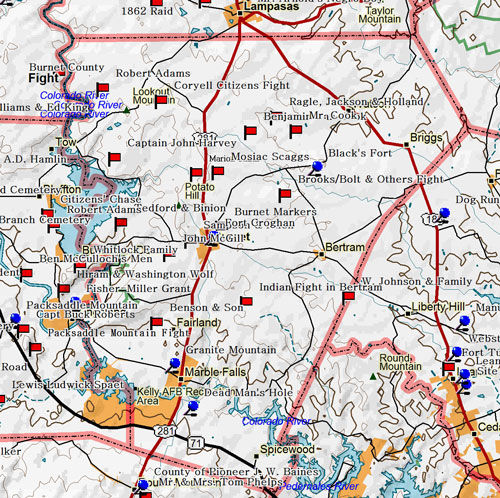 Marker Title: Airy Mount Barn
City: Burnet
Year Marker Erected: 1986
Marker Location: from Burnet take SH 29 E approx. 1 mi.
Marker Text: Kentucky native Adam Rankin Johnson (1834-1922) came to Texas in 1854. After attaining the rank of brigadier general in the Confederate Army, Johnson later settled in Burnet County where he was active in business and civic affairs. In 1882 he donated land for the railroad that carried Burnet County granite for the Texas State Capitol. This stone barn, on the homestead he called "Airy Mount", was built in the early 1880s and remained in the Johnson family until 1915. Recorded Texas Historic Landmark - 1986

Marker Title: Black's Fort
City: Bertram
Year Marker Erected: 1936
Marker Location: from Bertram take FM 1174 north approx. 8 miles; then east on CR 210A approx. 2 miles to fort site.
Marker Text: Built as a defense against the Indians in 1851 by William Black (1815-1907) on land owned by him. In the stockade, constructed of cedar logs, sentries were kept on guard on moonlight nights. Guns and ammunition for public use were kept here. Abandoned in 1868.

Marker Title: Dead Man's Hole
City: Marble Falls
Year Marker Erected: 1998
Marker Location: 2 mi. S of Marble Falls on US 281; .5 mi. E on RM 2147; .5 mi. S on CR 401.
Marker Text: Entomologist Ferdinand Lueders made the earliest recorded discovery of this cave in 1821. Notorious in the Civil War era, the hole is believed to have been the dumping ground for up to 17 bodies, including those of pro-Union Judge John R. Scott and settler Adolph Hoppe, several reconstruction-era county government officials, and Ben McKeever, who had a conflict with local freedmen. An oak tree which once stood over the cave was said to have rope marks caused by hangings. Powerful gases prevented thorough exploration of the site until 1951. The hole was platted in 1968 by the Texas Speleological Society and was found to be 155 feet deep and 50 feet long. (1998)

Marker Title: Granite Mountain
City: Marble Falls
Year Marker Erected: 1979
Marker Location: from Marble Falls take FM 1431 W approx. 1 mi. to rest stop ROW.
Marker Text: This 866-foot dome of solid pink granite, covering 180 acres, contains the largest quarry of its kind in the United States. This mountain, like all granite formations, was once melted rock similar to lava. As the molten rock cooled thousands of feet below the earth's surface, it hardened into large crystals of quartz, feldspar and several dark-colored minerals. Wherever strength, durability and beauty of finish are required, granite is a favored building stone. The mountain was part of a grant made to Texas colonist William Slaughter. the site became famous commercially when a dispute arose in the 1880s over the type of stone to be used in the Capitol in Austin. The issue was settle din 1885 when Governor John Ireland resisted demands to use non-native limestone. Following this decision, a special track was built to haul the granite to the rail line in Burnet. The stone was generously donated to the state by quarry owners G.W. Lacy, N.L. Norton, and W.H. Westfall. Today granite from the quarry here is shipped to all parts of Texas, the U.S. and foreign countries for use in monuments, shafts, jetties, and buildings. It has been used in the Galveston sea wall and in new state office buildings near the Capitol in Austin.

Marker Title: Holland Springs
City: Burnet
Year Marker Erected: 1969
Marker Location: from Burnet take CR 340 S approx 3 mi. to intersection of CR 340 and paved ranch road heading west.
Marker Text: Indians had probably visited these clear, cool springs for centuries when, in 1847, Henry E. McCulloch established a Ranger camp here, on Hamilton Creek. A year later, Samuel E. Holland (1826-1917), a Georgian, decided while visiting the camp that this lush valley was an ideal setting for a farm and home. He thus bought 1,280 acres here to become the first permanent settler in what was later Burnet County. In 1849 McCulloch's Ranger camp gave way to Fort Croghan. This site eventually developed, through the efforts of Holland, into a busy pioneer community.

Marker Title: Hoover's Valley Cemetery
City: Burnet
Year Marker Erected: 1969
Marker Location: from Burnet take US 281S approx. 5 mi., then west on Park Road 4 approx. 8.5 miles; then north on FM 2342 .5 mi. to ROW at intersection of FM 2342 and CR 119.
Marker Text: Established in 1850 by the Rev. Isaac Hoover, of local Methodist Protestant church. He came from Tennessee; soon initiated services in nearby oak grove. Oldest stone dates from about 1850. Another grave is of Whitlock family, killed by Indians. Marked graves total 157; unmarked, 88. Tract is still in use.

Marker Title: Peter Kerr
City: Burnet
Year Marker Erected: 1970
Marker Location: from Burnet take SH 29 W approx. 1.5 mi., then SW on CR 116 approx. 1.5 mi.; then west on private ranch road.
Marker Text: (1795-1861) One of "Old 300" of Stephen F. Austin's first colony; from Pennsylvania. Took part in 1836 War for Texas Independence. He made and lost several stakes. In 1851 bought a league and labor of Burnet County land, including site of Fort Croghan. Amassed wealth as Army beef contractor. Gave 100 acres and town square for Burnet County seat. To build a college here, he willed $23,500 and 6,359 acres of land to Burnet. The will was broken; city got a 2-acre site for a public school. It is said "He never refused to help when he observed its need.

Marker Title: Longhorn Caverns
City: Burnet
Year Marker Erected: 1967
Marker Location: from Burnet take US 281 S approx. 5 miles, then west on Park Road 4 approx. 7 miles (at park headquarters).
Marker Text: Rich in history and folklore. A young geologic formation, only a few million years old. Bones of elephant, bison, bear, deer, other animals have been found here. When white men came to area in 1840's, Indians knew the caverns; Rangers once found and rescued a kidnapped girl from Indians in "Council Room." During Civil War (1861-1865) gunpowder was manufactured and stored here. In 1870's outlaws, including the Sam Bass gang, sometimes lived in the cavern. Site of night club in 1920's. Has many unique features. Was opened to public in 1932.

Marker Title: Mahomet Cemetery
City: Bertram
Year Marker Erected: 1995
Marker Location: from Bertram take FM 243 NE approx. 10 miles, then SE on Cemetery Rd. approx. .3 mile.
Marker Text: This cemetery, with interments dating back to the 1850s, became a community graveyard for the Sycamore Springs and Mahomet rural communities. In 1909 J.W. Williams and J.W. and Nellie Greer deeded the cemetery property to the community of Mahomet. Among the hundreds of people buried here are many of the area's pioneer settlers and their descendants and veterans of wars ranging from the Mexican War (1846-1848) to the Vietnam War. Mahomet Cemetery remains active and is maintained by an association of descendants of people buried here. Sesquicentennial of Texas Statehood 1845 - 1995

Marker Title: Oldest Commercial Building in Burnet
Address: 309 S. Main
City: Burnet
Year Marker Erected: 1966
Marker Text: Logan Vandeveer (1815-55), a hero of the 1836 Battle of San Jacinto, came here about 1849 as a Fort Croghan beef supplier. He became first United States Postmaster in burnet and in 1854 built this native stone structure. With a partner named Taylor, he had a store on the ground floor. Vandeveer was a charter member of Valley Lodge No. 175, A.F. & A.M., which occupied the top floor from 1855 to 1969. The Lodge still owns the building. Recorded Texas Historic Landmark - 1966

Site of Town of Strickling

Marker Title: Site of Town of Strickling
City: Burnet
Year Marker Erected: 1970
Marker Location: from Burnet go north on FM 963 approx. 11 mi., then south on FM 1174 1 mile.
Marker Text: Once a busy rural community. Named for Mrs. Martha (Webster) Strickling, who settled here in 1853 with husband Marmaduke. As child, she survived killing of some 30 settlers in infamous Webster Massacre near Leander, and months of Indian captivity. Post office opened here, 1857, and Strickling became a mail terminal and stage stop. Tons of lumber and buffalo hides were hauled through here. The town had a school, churches, a doctor's office, and stores. Strickling gradually declined when bypassed by the railroad, 1882. Only the cemetery remains.

Marker Title: Logan Vandeveer
City: Burnet
Year Marker Erected: 1974
Marker Location: 703 W. SH 29 (in Fort Croghan Historical Museum complex).
Marker Text: (1815-55) Came from Kentucky in 1833. He was badly wounded fighting for Texas at San Jacinto, 1836. Moving here to sell beef to Fort Croghan, 1849, he was one of organizers of the county and original postmaster of the town. In the early 1850s he built this house near Hamilton Creek for a daughter. It stood at 502 South Water Street. Burnet County Historical Society moved it here for preservation in 1973. Porch was floored with stones from an early Burnet County Courthouse. Recorded Texas Historic Landmark - 1974

Marker Title: Mr. and Mrs. Jacob Wolf
City: Burnet
Year Marker Erected: 1967
Marker Location: from Burnet take US 281 N approx. 11 miles to CR 103, then CR 103 W .3 miles to cemetery (marker located in center road portion of cemetery).
Marker Text: Jacob Wolf (1812-1874) and wife Adeline Faulkner Wolf (1814-1870) came from Tennessee to Texas about 1850. Obtaining land grant in Burnet County, they settled at Dobyville, and were pioneers, supplying their own provisions, buildings, medicines, and school. Menaced by Indian raids and aware of need for government, Wolf in 1854 help organize Burnet County. Of the 8 children, 2 sons became sheriffs-- one in Burnet, one in Lampasas County.

About 1869, an African woman, who was working for Mr. Hoffer, in Burnet County, was killed by the Indians, near the house.