1675-76, the most devastating war between the colonists and the Indians in New England. The war is named for King Philip, the son of Massasoit and chief of the Wampanoag. His Wampanoag name was Metacom, Metacomet, or Pometacom. Upon the death (1662) of his brother, Alexander (Wamsutta), whom the Indians suspected the English of murdering, Philip became sachem and aintained peace with the colonists for a number of years. Hostility eventually developed over the steady succession of land sales forced on the Indians by their growing dependence on English goods.

Suspicious of Philip, the English colonists in 1671 questioned and fined him and demanded that the Wampanoag surrender their arms, which they did. In 1675 a Christian Indian who had been acting as an informer to the English was murdered, probably at Philip's instigation. Three Wampanoags were tried for the murder and executed. 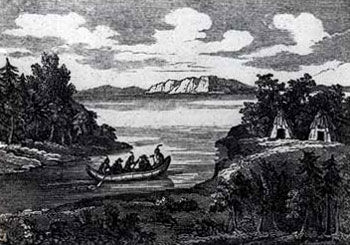 Indians in Canoe with White Men Captured during the Deerfield Massacre

Incensed by this act, the Indians in June, 1675, made a sudden raid on the border settlement of Swansea. Other raids followed; towns were burned and many whites--men, women, and children--were slain. Unable to draw the Indians into a major battle, the colonists resorted to similar methods of warfare in retaliation and antagonized other tribes.

The Wampanoag were joined by the Nipmuck and by the Narragansett (after the latter were attacked by the colonists), and soon all the New England colonies were involved in the war. Philip's cause began to decline after he made a long journey west in an unsuccessful attempt to secure aid from the Mohawk. In 1676 the Narragansett were completely defeated and their chief, Canonchet, was killed in April of that year; the Wampanoag and Nipmuck were gradually subdued. Philip's wife and son were captured, and he was killed (Aug., 1676) by an Indian in the service of Capt. Benjamin Church after his hiding place at Mt. Hope (Bristol, R.I.) was betrayed. His body was drawn and quartered and his head exposed on a pole in Plymouth. The war, which was extremely costly to the colonists in people and money, resulted in the virtual extermination of tribal Indian life in southern New England and the disappearance of the fur trade. The New England Confederation then had the way completely clear for white settlement. 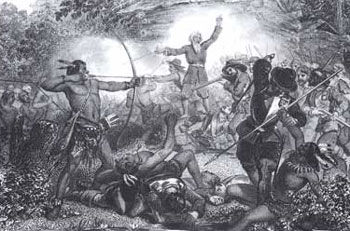 11 Wampanoags are reported in arms near Swansea.

14-25 Rhode Island, Plymouth, and Massachusetts authorities attempt negotiation with Philip and seek guarantees of fidelity from Nipmucks and Narragansetts.

Mohegans travel to Boston and offer to fight on the English side.

16-24 Massachusetts envoy attempts to negotiate with the Nipmucks.

19 Philip and his troops escape an English siege and flee Pocasset for Nipmuck territory. 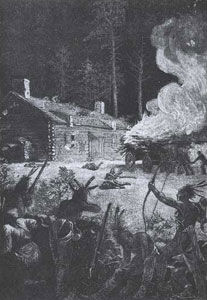 22 A group of unidentified Indians kill seven colonists at Lancaster.

30 Captain Samuel Moseley arrests fifteen Hassanemesit Indians near Marlborough for the Lancaster assault and marches them to Boston.

18 Narragansetts sign a treaty with the English in Boston. Massachusetts troops are ambushed near Northampton.

2-12 Commissioners of the United Colonies order a united army to attack the Narragansetts.

7 Massachusetts Council prints a broadside explaining the case against the Narragansetts.

Philip travels westward to Mohawk territory, seeking, but failing to secure, an alliance.

14 Joshua Gift is captured by the English.

26 Longmeadow, Marlborough, and Simsbury are attacked.

2-3 Mary Rowlandson is released and returns to Boston.

c-31 Christian Indians are moved from Deer Island to Cambridge.

12 Indians attack Hadley but are repelled by Connecticut soldiers.

19 Massachusetts issues a declaration of amnesty for Indians who surrender.

22 Captain Tom is executed in Boston.

2 Major John Talcott and his troops begin sweeping Connecticut and Rhode Island, capturing large numbers of Algonquians who are transported out of the colonies as slaves throughout the Summer.

Indians attack Taunton but are repelled.

The Indians were warrior societies. Despite the imbalance of arms since they lacked cannon, and depended upon the English or French for muskets and powder, they were effective against European military formations. Colonial militia, which quickly adopted the Indian's style of combat, what we call guerrilla or insurgency warfare, were better able to deal with Indian tactics. Indian warfare often involved surprise raids on isolated settlements as a way of evening the odds. In King Philip's war (1675-1676), the Indian attacks left: "In Narraganset not one House left standing. "At Warwick, but one. At Providence, not above three. "At Potuxit, none left. ... "Besides particular Farms and Plantations, a great Number not be reckoned up, wholly laid waste or very much damnified. "And as to Persons, it is generally thought that of the English there hath been lost, in all, ..., above Eight Hundred." This is followed by a claim that fearful atrocities were worked on the survivors, and the women raped.

Deerfield would recover only to suffer repeated attacks in the French Indian Wars.

The following is an account of the attack from New England Outpost: War and Society in Colonial Deerfield, Richard I. Melvoin (1989):

By 1704 the town has grown to 260 people. The size of the town suggests stability. Yet like its predecessors Deerfield lies alone and exposed on the frontier. There are still no English settlements west of Deerfield for fifty miles, until one reaches the Hudson River and New York. Nor are there English towns north of Deerfield at all. To the east, too, lie forty miles of wilderness.

The late summer of 1703 has been a time of great anxiety. Activities of late spring have once again brought forth these fears. In May, early in the conflict known as Queen Anne's War, New York governor Lord Cornbury sent word that French soldiers and allied Indians from Canada were heading for Deerfield and the Connecticut valley. As of September a stressful summer has passed peacefully. Then in October, a small Indian force strikes, capturing two Deerfield men. Tensions heighten; the town strengthens its fortifications; the Massachusetts General Court sends soldiers to help protect the town. As of December, though, all is quiet. The cold and snow of winter now promise further respite, for in 1704 wars are not fought in the depths of winter.

But now the quiet of the winter is about to be shattered. Two hours before dawn on the fateful leap- year morning of February 29, 1704, Deerfield's inhabitants lie asleep inside the town's palisade. Because the Indian threat remains, all the town's residents, including the twenty Massachusetts soldiers just arrived from Boston, sleep in the dozen houses inside the fort. The other thirty or so houses outside the palisade lie empty. A watchman is assigned to patrol the town through the night. In the pre-dawn hours, however, he proves unfaithful to his duty. That breach of faith soon proves fatal.

Two miles north of town, just across the Deerfield River, lies a military force of two hundred to three hundred French and Indians. These men have traveled close to three hundred miles to reach this spot. Now they are ready to attack. Silently they cross the river and traverse two miles of open farmland toward the sleeping town. They are able to move quietly, for deep snow dampens all sound. Winter aids them in another way as well. Heavy drifts have piled snow against the walls of the fort, drifts so high that the attackers can easily scale the walls. Without a night watch to contend with, the warriors quickly move inside. The signal comes -- a cry rings out -- and the attack begins.

Although the townspeople fight back bravely, the French and Indian force is too strong and their advantage too great. Even the reinforcements who charge up from Hadley and Hatfield cannot turn the tide. At battle's end, the survivors grimly assess the town's losses. Fifty-six English men, women, and children lie dead; another 109 have been captured. In all, three-fifths of the town's people are gone. Almost half the houses have been burned. Deerfield is not abandoned because the region's military commander will not allow it. As it is, the town barely clings to life. Edward Allen, Sarah's father is named city clerk to replace the previous clerk, Thomas French, who was killed in the battle. It is years before survival is assured.

The following description about Brookfield is from the book, American Indian Wars, by John Tebbel & Keith Jennison. 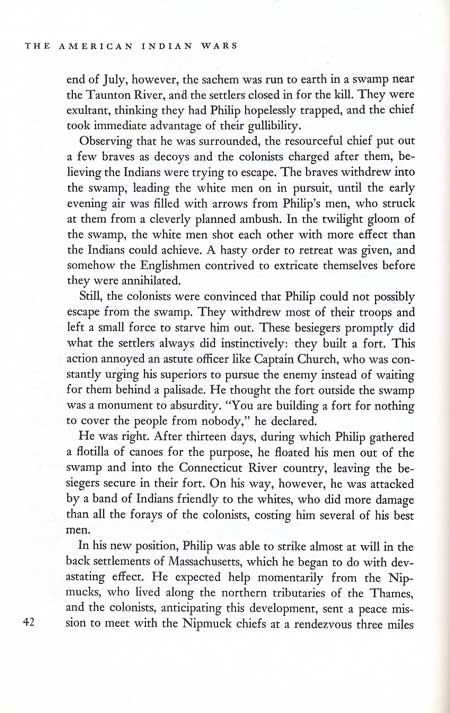 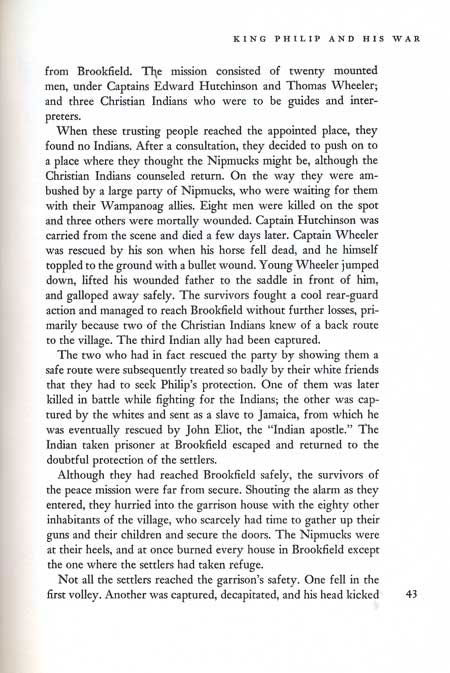 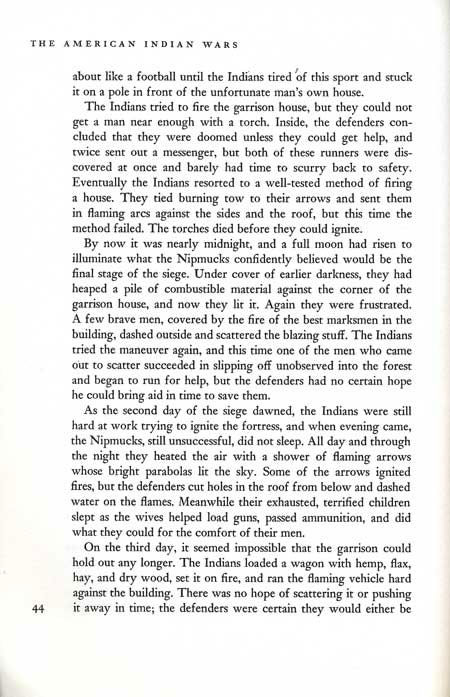 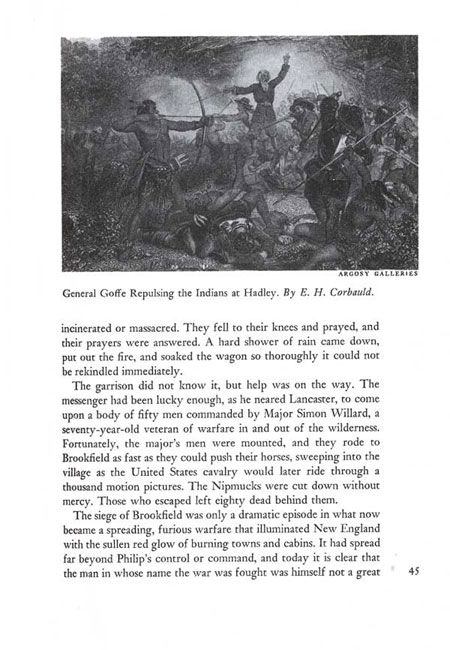 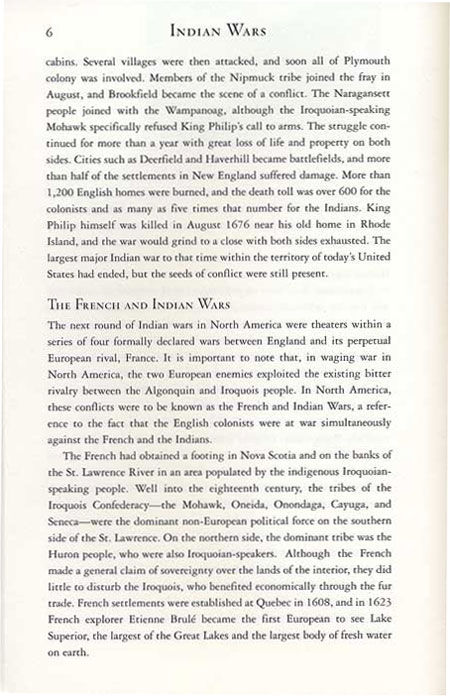 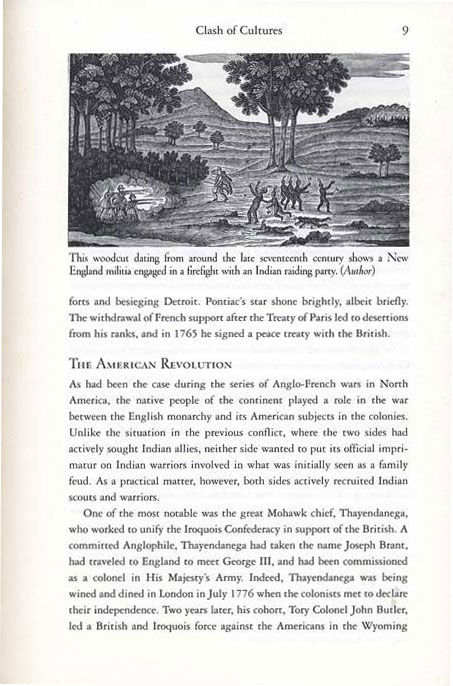