The Indians took a northeast course toward the home of Brazilla Payne, who lived in Mills County, then a part of Lampasas, near the present town of Payne.

When the savages reached the ranch, Mr. Payne and his small African boy were driving home a herd of sheep. The ranchman was driving on one side of the sheep and the African boy on the other. When the Indians appeared, they dashed upon Mr. Payne. The African lad, who was out of sight, hurried on to the house and told Mrs. Payne, "The Injuns wuz killin' Massa Payne!" The African boy, however, saw neither the Indians nor Mr. Payne at the time. After Brazilla Payne was murdered, the savages next appeared near the home of Harrison Miller, who was building a stone house on the banks of Simms Creek, in the present county of Mills, about three or four miles northeast of the Payne Ranch. It was late in the evening and Mr. Miller's first warning was the appearance of Indians on each side of the house and the whistling of flying arrows. Mr. Miller, however, jumped through the back window, crossed the creek and concealed himself in a thicket, which Indians seldom dared to enter.

Note: Author personally interviewed R. Kolb, John Nichols and others who lived in that section at the time. 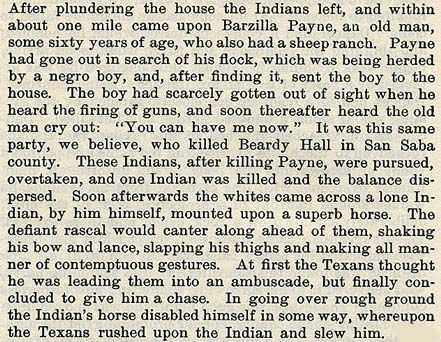