The following Massacre Rocks Massacre story occurred just southwest of Fort Hall on the Snake River and can be found in the book, Encyclopedia of Indian Wars, by Gregory F. Michno. 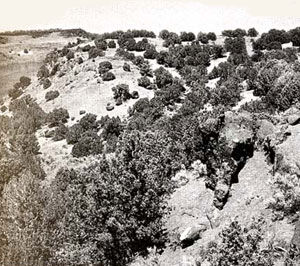 9 August 1862, Neeley, Idaho: Approximately 150 Shoshones and Bannocks fell upon several wagon trains on the Oregon Trail, along the Snake River between American Falls and Massacre Rocks. In the first attack, about half a mile east of the rocks, the Indians swept through the wagons of the Smart train and killed two emigrants. Continuing east two miles, the warriors hit the Adams train, killing three more men and badly wounding a woman, Elizabeth Adams.

That night, the Indians pulled away as the Kennedy train joined the survivors of the two attacks. With 86 wagons, the emigrants formed a corral. In the morning, John K. Kennedy led out 40 well-armed, mounted men to recover the stolen stock. The emigrants found the Indian camp, with nearly 300 Indians, five miles south. In the recovery attempt, Kennedy lost three men and a few more were wounded, Kennedy himself mortally. the Indians chased Kennedy and his men back to the river, but by then another train, the Wilson party, had come up, adding 46 wagons to the defense. The Indians chose not to attack, and the combined trains moved on.

Including the subsequent deaths of Kennedy and Elizabeth Adams, emigrant fatalities totaled ten, with nine wounded.