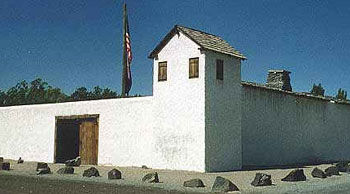 Fort Hall was an important stop for the emigrants in the trail's early years. Yet few who passed through this fort knew the strange reason it was built.

Nathaniel Wyeth began with a grand moneymaking scheme. He and 70 men planned to haul supplies to the 1832 fur trappers rendezvous, reap huge profits, then push west to the Columbia River, where they hoped to set up a fishery and export salmon to Hawaii and New England.

From the beginning almost nothing went right. After months of travel, Wyeth arrived at the rendezvous, but no one would buy his goods. Frustrated and disillusioned, his last ditch plan was to build a fort nearby. Its purpose: to serve as a base of operations to get rid of Wyeth's excess supplies by selling them to nearby tribes and trappers.

When Fort Hall was completed in 1834, it stood as the only American outpost in the entire Oregon country.

But the fort did not stay American very long. Wyeth's other ventures failed, and by 1837, he had sold the fort to the huge Hudson's Bay Company. The British flag now flew over Fort Hall. And the British made a point of discouraging the American pioneers from traveling on to Oregon. It was a subterfuge that worked for a few years at least.

The fort was abandoned in 1855, but emigrants continued to camp in the abandoned buildings and graze stock in the pastures until 1863. That year, extraordinary floods swept away even the remains.

The original site of Fort Hall is on private property today, but a replica has been built in the city of Pocatello where visitors may see how the original fort looked.

On interstate 15 South, Take Exit 67 (South 5th Exit) to 5th Avenue and turn going North toward the City of Pocatello. About 200 yards past where 4th Street and 5th Street unite as 5th Avenue. Turn left to 4th Street and you are along Terrill Ifft Park, First paved road on right and go up on top of Lava Cliffs, then turn right about 200 yards down Alvord Loop. You will be at the entrance to the Fort Hall Replica.