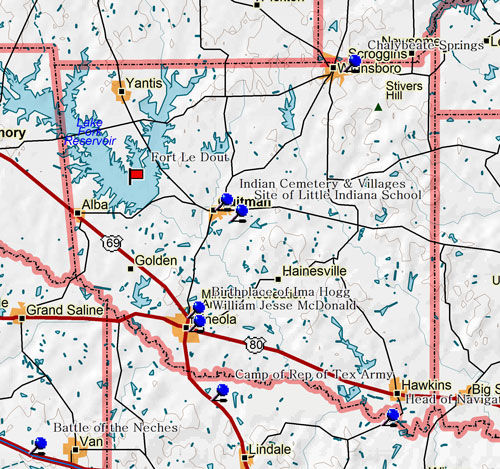 Marker Title: Chalybeate Springs
Address: 3 mi. E on SH 11/CR 4350 intersection
City: Winnsboro
County: Wood
Year Marker Erected: 1990
Marker Location: 3 mi. E of Winnsboro on SH 11 at CR 4350
Marker Text: Located on land owned by early settler L. M. Musgrove, the springs near this site first were known as Musgrove Springs. Later called Chalybeate Springs for the high iron content in the water, they gave rise to a thriving resort community. A school was built on land given by William and Susan Bolding in 1881, and the village included churches, stores, and a post office. Walker Fore bought the springs property in the 1880s and built a two-story hotel and spa. The hotel closed in 1895, and the building was razed in 1935. The community declined, and the school closed in the 1950s. (1990)

Marker Title: Birthplace of Miss Ima Hogg
Address: 125 N. Line Street
City: Mineola
County: Wood
Year Marker Erected: 1997
Marker Location: 125 N. Line Street, Mineola
Marker Text: Born here on July 10, 1882, Ima Hogg was the only daughter of Sarah Stinson and Gov. James S. Hogg. Ima studied fine arts at the University of Texas in Austin, and in New York and Europe. In 1918 oil was discovered on the Varner-Hogg Plantation near West Columbia which enabled Miss Hogg to devote her life to the arts, historic preservation and philanthropy. She was recognized nationally and received many accolades for her services to the people of Texas. She died August 19, 1975, in London and was buried in Austin. (1997)

Marker Title: Indian Cemetery and Villages
Address: CR 1416
City: Quitman
County: Wood
Year Marker Erected: 1968
Marker Location: 5 mi. NE of Quitman on SH 37 to CR 1416, near east end of Lake Quitman Dam
Marker Text: Found during road-building operations and reported Nov. 1966. In Jan. 1967, eight graves were studied, but the bone fragments unearthed were so old that they crumbled upon exposure to air. Pieces of pottery were also found in the cemetery and in six villages in the vicinity. Grindstones, a jar with red paint, water jugs, and skinning stones suggest that the area may have been inhabited about 1200 to 1500 A.D., and possibly at an earlier time, by the Caddo Indians, an agricultural people with a highly advanced culture. Other cemeteries exist nearby. (1968)

Marker Title: Site of Little Indiana School
Address: CR east of FM 2225
City: Quitman
County: Wood
Year Marker Erected: 1983
Marker Location: county road east of FM 2225 and 1mi. N of FM 515, 10 mi. NW of Quitman
Marker Text: In 1900 a group of Indiana families, led by John M. Hart and Roland Alexander, migrated to this area of Texas. They arrived to find the land, which had been promoted as abundant in timber and rich soil, to be unfertile and susceptible to flooding. Many of the pioneers returned to their home state, but those who remained established a community they named Little Indiana. Soon after their arrival, the settlers of Little Indiana set aside land for a school. Construction of the schoolhouse was a community effort. Logs were hauled by oxen-drawn wagons to the local sawmill, where they were cut for use in the building project. The seven-grade Little Indiana School opened about 1901, with Alta Alexander Hart as the sole teacher. Later teachers included Hazel Alexander, Harrison Bullock, William McCreight, and OIa McCreight. The community grew for several years; by 1907, however, illness and poor crops brought about the abandonment of Little Indiana. The school and other establishments closed, and though many of the settlers returned to Indiana, others moved to different parts of Texas. Little Indiana School, while short-lived, remains part of the history of Wood County's early pioneering efforts. (1983)

Marker Title: William Jesse McDonald
Address: 116 Newsom
City: Mineola
County: Wood
Year Marker Erected: 1999
Marker Location: 116 Newsom, Mineola
Marker Text: (September 28, 1852 - January 15, 1918) Born in Mississippi, "Bill" McDonald moved with his family to Rusk County, Texas, about 1866. During Reconstruction, McDonald was tried for treason after a conflict with Union authorities but was acquitted. He established W. J. McDonald and Co., one of the first mercantile firms in Mineola, by 1873. McDonald became friends with James Stephen Hogg, who introduced him to Rhoda Carter; she and McDonald were married in 1876. By 1877 they were operating McDonald Hall opera house, a prominent local cultural center. When Hogg became county attorney in 1878, he prosecuted McDonald and others for carrying weapons in the increasingly violent streets of Mineola. McDonald later became a deputy sheriff of Wood County, and his reputation for boldness and marksmanship began with his role in bringing order to Mineola. During the 1880s McDonald started cattle ranches in Wichita and Hardeman counties and became a deputy sheriff in Hardeman County. He also was appointed deputy to the U. S. Marshal of the Northern District of Texas. Governor James Hogg made McDonald a captain in the Texas Rangers in 1891. He was an exemplary administrator and investigator for the Texas Rangers until 1907, when Governor Thomas Campbell appointed him state revenue agent. He later served as a bodyguard to President Woodrow Wilson, who in April 1913 appointed him Marshal of the Northern District of Texas, a post he held until his death. Most celebrated for his years as a Texas Ranger, McDonald was considered a fine tracker, an excellent criminal investigator, and an efficient controller of mobs. He died of pneumonia in 1918 and was interred at Quanah. (1999)

Marker Title: Mineola
City: Mineola
Year Marker Erected: 2008
Marker Location: 100 Commerce St
Marker Text: Since its establishment in 1873, the community of Mineola has been tied historically to the railroad and transportation industries. The Texas & Pacific Railroad planned to connect Longview and Dallas by rail, and began building west in 1872. Meanwhile, the Houston & Great Northern Railroad built northward from Troup. Several communities developed near anticipated depot sites, though they declined when the two railroads joined. The site was named Mineola; various stories recount the naming of the new settlement.

Additional rail lines soon connected to Mineola, which experienced impressive growth. The rail brought new residents, including a number of immigrant families, and made Mineola a shipping center for agricultural Wood County. The growth sparked the establishment of various institutions, including a newspaper, the Mineola Monitor ; churches, beginning with St. Paul's Baptist Church in 1871; a city cemetery, founded in 1873; a school system started in 1875 and becoming public in 1881; and First National Bank, which organized in 1898. An 1888 fire destroyed 18 buildings downtown, but the community quickly recovered.

In the early 20th century, transportation continued to affect Mineola, as the federal government built U.S. Highway 80 through the town. In 1929, the Texas 7 Pacific terminal in Longview relocated to Mineola; many families resettled here, sparking population and commercial growth. The railroads continued to be vital to the community until they declined in the 1950s.

In 1996, Amtrak revived passenger service to Mineola, restoring the town's bond with rail. Today, Mineola continues to be a leading community in Wood County and east Texas.

Reportedly located in what is now Wood County, this fort is one on which there has been little written, and very little known. The French had possibly established it during the 1700s as a post for trading with the Caddo and Wichita Indians. Le Dout may have been located on the Sabine River or possibly on Lake Fork Creek, a fort of the Sabine. A 1989 archeological study suggested that a site, located about five miles from the intersection of Lake Fork Creek and the Sabine River, may be the location. If so, Fort Le Dout may be beneath Lake Fork Reservoir.