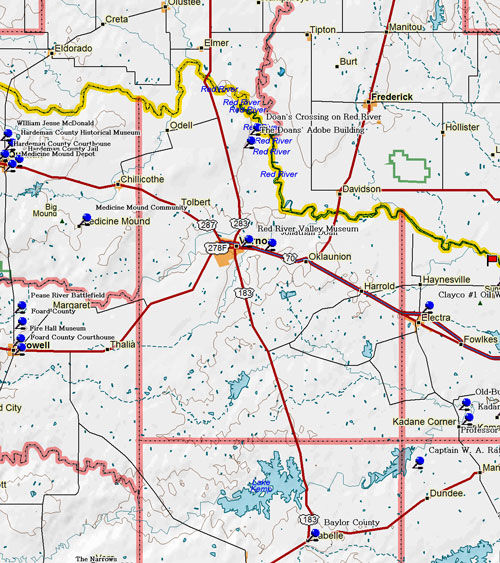 Marker Title: The Doans' Adobe Building
Address: FM 2916, NE of Vernon
City: Doan's Community
County: Wilbarger
Year Marker Erected: 1962
Marker Location: From Vernon, take US 283 North about 13 miles to FM 2916 and follow FM 2916 east to Doan's Community.
Marker Text: Corwin F. Doan (1848-1929) settled here on Red River in 1878; erected this house in 1881. In his early picket store and later, permanent building, he had large stocks of goods to supply the cowboys who annually drove cattle in herds of thousands along the Western Trail. The village of "Doan's Crossing" had 14 or more buildings. Doan, his wife Lide (1850-1905), and their 3 children entertained people from all walks of life -- English Lords to Indians -- in this adobe house. (Recorded Texas Historic Landmark--1962.) 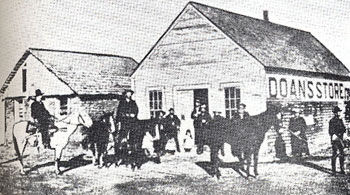 Marker Title: Doan's Crossing
Address: FM 2916, NE of Vernon
City: Doan's Community
County: Wilbarger
Year Marker Erected: 1993
Marker Location: From Vernon, take US 283 north about 13 mi. take FM 2916 east about 3 mi to Doan's Community.
Marker Text: A major route for cattle drives known primarily as the Western Trail developed from far South Texas to Dodge City, Kansas, in the 1870s. About 1876, trail drivers along the route began crossing the Red River near this site. In 1878, Ohio native Jonathan Doan established a trading post near the crossing and became the first person to permanently settle in Wilbarger County (organized in 1881). In the early 1880s he and his partner/nephew Corwin F. Doan recorded the passage of hundreds of thousands of cattle along this river crossing which became known as Doan's Crossing.

Marker Title: Doan's Crossing on Red River
Address: FM 2916, NE of Vernon
City: Doan's Community
County: Wilbarger
Year Marker Erected: 1936
Marker Location: From Vernon, take US 283 North about 13 mi. then take FM 2916 east about 3 mi to Doan's Community.
Marker Text: By herds on the Western Texas-Kansas Trail, 1876-1895, six million cattle and horses crossed here. "You don't need much monument if the cause is good. It's only these monuments that are for no reason at all that has to be big. Good luck to you all anyhow. Yours, Will Rogers." Dedicated to George W. Saunders, President of the Old Trail Driver's Association, "Who kept the trail records straight."

Marker Title: Early Wilbarger County
Address: US 287 & 183 intersection
City: Vernon
County: Wilbarger
Year Marker Erected: 1968
Marker Location: US 287 & 183 intersection, Courthouse Square, Vernon.
Marker Text: Organized 1858 and named in honor of Mathias and Josiah P. Wilbarger, early Texas settlers. Josiah, a surveyor, had become famous as the man who lived 12 years after being scalped by Comanches, 1833, near Austin. He had saved his life by putting a wool sock on his head; he was rescued next day by neighbors. An adobe house built 1878 by Jonathan and C.F. Doan, the first Wilbarger County settlers, marks the Red River crossing of the famous Western Cattle Trail. Vernon (formerly Eagle Flat) became county seat in 1881. The first railroad reached town, 1886.