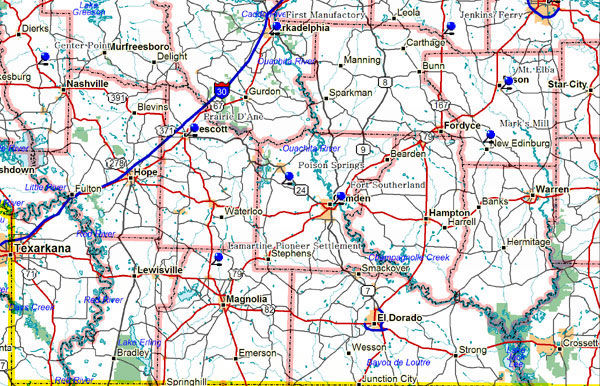 Near this spot in 1837 Robert Messer built the first house in Center Point. A few years later John Russey opened the first store. Center Point acquired its name and post office in 1848, and became an incorporated town in 1859. Held by the Confederates throughout the Civil War, Center Point was raided by Carpetbagger State Militia in 1868 because of its southern sympathies. It was the first county seat of Howard County from 1873 to 1905. On February 12, 1900 Jeff Davis opened his campaign for Governor of Arkansas with an address here.

Indians in Primeval times, DeSoto in 1541, Pioneers in the 1800s and Confederates during the Civil War obtained salt from the creek and old well here. John Hemphill in 1812 opened one of the first manufactories in Arkansas - a salt refinery.

One of the oldest settlements in Columbia County. Here Colonel John Dockery had his plantation and home. Here T.P. Dockery, who became a general in the War Between the States was born and reared. The Caddo Indian Trail from Camden on the Quachita to Miller's Bluff on Red River passed by here. Other Indian trails centered here. Andrew Jackson cut out these trails and built a military road in 1825 from New Orleans to the frontier forts of Townson and Fort Smith. Columbia County, Highway 19, 3 miles north of Waldo

Here on April 18, 1864 a Union forage train of 200 wagons escorted by 1170 men was attacked and captured by Confederate troops commanded by Generals John. S. Marmaduke and Samuel B. Maxey. The wagons were loaded with corn for the Union army of Gen. Frederick Steele encamped at Camden. Loss of these supplies helped to hasten Steele's retreat to his base in Little Rock. The Union loss at Poison Springs was 201 men killed, wounded and missing. Confederate casualties totaled 114 men. Quachita County 3 miles west on Poison Springs Road on highway 76 near Chidester in Ouachita County

Located at Prescott in Nevada County, most of it is still pasture land and is all private property. Visitors can learn about the battle at a museum in Prescott.