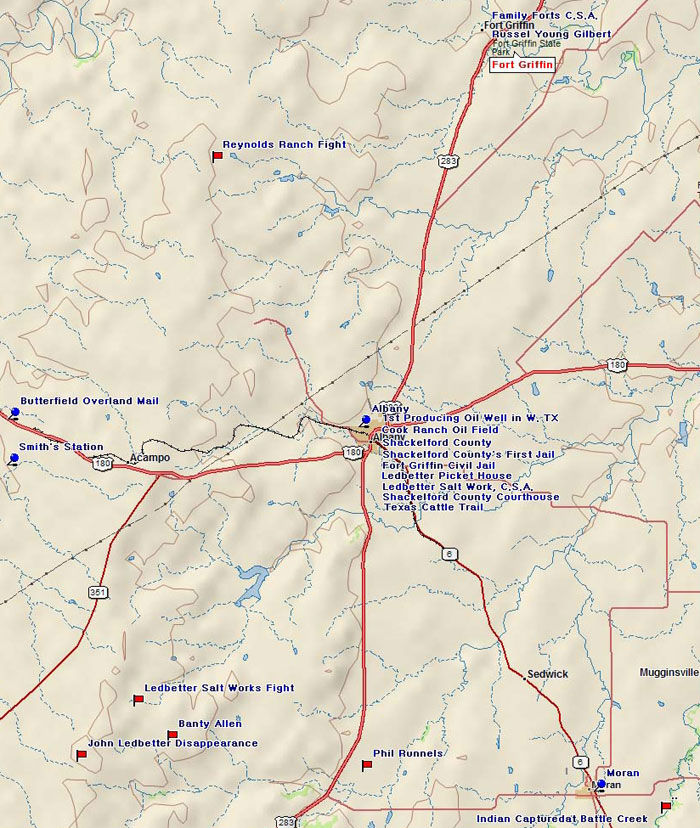 Marker Title: Cook Ranch Oil Field
Address: US 180/283 intersection
City: Albany
Year Marker Erected: 1976
Marker Location: City Park at U.S. 180/283 intersection, west city limits, Albany.
Marker Text: William Ivy Cook (1857-1923) and his wife Matilda moved to this county in 1985. With a brother-in-law, J. H. Nail, Cook purchased a 27.75-section ranch. The Cooks bought out Nail in 1898, and have owned the ranch ever since. During the 1918 Breckenridge and Ranger booms, Cook sold leases but prophesied he could drink from his hat all of the oil under his land. In 1925 his widow leased all open acreage to Charles Roeser, Tol Pendleton, and Marshall R. Young, of Roeser & Pendleton, Inc. This firm's second well in 1926 struck oil at 1241 feet and flowed at 1000 barrels a day. This prolific flow of oil at such a shallow depth has been one of Cook Ranch field's remarkable features. Commercial low pressure gas injection was started on the ranch in 1927 and helped elevate recovery standards internationally. With the oil wealth, Mrs. Cook founded the W.I. Cook Memorial Hospital in Fort Worth in 1929. Cook field enriched Albany and its trade area by expanding petroleum-related business activities. Of the 1087 wells drilled on the ranch, 825 yielded oil and four gas. Production has now exceeded thirty million barrels. Marshall R. Young remains owner of the oil firm. (1976)

Marker Title: Family Forts, C.S.A.
Address: US 283 N of Albany 15 miles.
City: Albany
Year Marker Erected: 1963
Marker Location: From Albany, take US Highway 283 north about 15 miles take Westward Drive into Fort Griffin State Park (marker in front of park headquarters).
Marker Text: Few in numbers and with little protection from the military but refusing to abandon their country, certain families of courageous and determined people on the Texas frontier during the Civil War gathered together in hastily constructed stockades and held out against the threats of hostile Indians and renegade whites. Known as "forting up", this plan was encouraged by the military for this part this part of the state. Most of the men 18 to 45 were away in Confederate service and those 17 and over 45 were subject to periodic militia duty for frontier protection. Family forts gave settlers way to protect stock, farms and provide some schooling for their children. Back of Family Forts, C.S.A. Best-known family fort in this sector was Fort Davis, located 8 miles east on bank of Clear Fort of Brazos in Stephens County, where some 120 people lived during last year of Civil War. Named for Confederate President Jefferson Davis, it was laid off in lots. Log houses with dirt roofs, mud in cracks, dirt floors, were connected by pickets driven into ground. A blockhouse was used by women and children during raids. There were no luxuries, little food, all clothes, soap, soda, candles were made. Nearest supplies were 100 miles away, doctor 65 miles. Yet, there were dances, candy pulls, weddings, "feasts", Sunday School, occasional sermons and blue-backed spellers. Other family forts near were: Lynch and Green ranches, Shackelford County, Blair's Fort, Allen's Ranch, Eastland County; Buffalo Springs, Clay County; Bragg's, Murray's, Young County; Picketville, Mugginsville, Owls Head, Stephens County. Erected by the State of Texas, 1963.

Marker Title: Fort Griffin Civil Jail
Address: N Ave C & Railroad St.
City: Albany
Year Marker Erected: 1974
Marker Location: City Park, N. Avenue C & Railroad Street, Albany.
Marker Text: This structure was the jail used in the town of Fort Griffin located 15 miles north of here, near the United States Army Post of Fort Griffin which defended the frontier from 1867 to 1881. During this period lawlessness was common in the town. Citizens built this thick-walled jail in 1878, although a conspicuous stone bears an earlier date. Gamblers, trail drivers, buffalo hunters, and skinners were frequently held here, as many as 18 at one time. Used as a cowshed after the 1880s the jail was moved here in 1954 by W.G. Webb and the county commissioners. (1974)

Marker Title: Ledbetter Salt Work, C.S.A.
Address: SH 6 & US 180
City: Albany
Year Marker Erected: 1963
Marker Location: Courthouse Square, corner of SH 6 & Highway 180, Albany.
Marker Text: Located 8 miles southwest on Salt Prong, Hubbard Creek. Discovered 1861 by trail drives. W.H. Ledbetter began extensive development of deposits in 1862 with increased Civil War demand for salt. A large furnace was built, kettles and materials for refining were brought from East Texas by wagon. Salt in large quantities was furnished Confederate troops west of the Mississippi, State Militia, area ranches and towns. Smoking or salting were only ways to preserve meat. When South levied a meat tithe, salt was vital to cure bacon for military. Back side Ledbetter Salt Works: Salt was a must for horses and mules used by cavalry, artillery and supply wagons. Hides were preserved with salt to make shoes and harness. Rangers used it to treat rattlesnake bites and aliments. Settlers came from a 200 mile radius for salt, taking it by saddlebag and wagon. The frontier regiment Texas Cavalry guarded the works and roads from hostile Indians during the war. Indian troubles continued after the war. In 1867, nearby U.S. Fort Griffin was established, and a "six-pounder" cannon was loaned to the works for defense. Salt was produced until 1880. A Memorial to Texans Who Served the Confederacy Erected by the State of Texas, 1963

Marker Title: Moran
Address: SH 6 & FM 576
City: Moran
Year Marker Erected: 1976
Marker Location: Intersection of SH 6 & FM 576, Moran.
Marker Text: Pioneers came to this area as early as the 1860s. During the Civil War (1861-65), they built the temporary fortress settlement of Mugginsville on Deep Creek. At one time, a branch of the western cattle trail passed nearby. Population increased after the arrival of the Texas Central Railroad in 1881. The town of Moran was established by Swope Hull, who operated a grocery store at the rail crossing on Deep Creek in 1883. He was postmaster of the community's first post office, called "Hulltown," which opened August 29, 1883. Hull bought 160 acres between Post Oak and Deep creeks and platted a townsite in March 1884. Most of the property was bought by I.B. (BEM) Scott, who sold his interests in 1890 to M.D. Bray (1845-1926), a prominent local merchant and landowner. The town's name was changed in 1890 to "Hicks" and in 1892 to "Moran" for Texas Central Railroad president John J. Moran. By the 1890s, the community had a school and Baptist, Church of Christ, Cumberland Presbyterian, and Methodist congregations. A newspaper was begun in 1895 and bank in 1902. Incorporated in 1919, Moran was a shipping point for drilling supplies during the oil and gas boom of 1910-30. Today the area's economy is based on farming, ranching, and oil and gas production. (1976)

Marker Title: Shackelford County
Address: SH 6 and US 180
City: Albany
Year Marker Erected: 1976
Marker Location: Courthouse grounds, intersection of SH 6 & Highway 180, Albany.
Marker Text: First inhabited by nomadic Indian tribes, Shackelford County was created in 1858 and named for Dr. John Shackelford (1790-1857). The first permanent Anglo-American settlers in this area included, J. C. Lynch (1828-1912), a native of Ireland who moved here in 1858; W. H. Ledbetter (1833-84), who arrived in 1859 and later started the Ledbetter Salt Works; T. E. Jackson (b. 1820), a merchant who settled in the northern part of the county before 1860; and G. W. Greer (1812-93), who operated a stage station on Hubbard Creek after 1861. During the Civil War (1861-65), settlers took refuge at "family forts" such as Fort Mugginsville and Fort Hubbard. They gained military protection from frontier perils when the U.S. Army established Fort Griffin in 1867. Griffin, the lawless settlement that grew up around the fort, attracted buffalo hide hunters and cattlemen driving herds up the western cattle trail. Shackelford County was organized September 12, 1874, with Fort Griffin as temporary county seat. Albany was chosen permanent county seat in November 1874. The county's population increased sharply after the arrival of the Texas Central Railroad in 1881. Petroleum production generated an economic boom, 1910-30. Chief industries today (1976) are petroleum and ranching. (1976)

Marker Title: Shackelford County
Address: US 180 & 283
City: Albany
Year Marker Erected: 1936
Marker Location: Center of city park at intersection 180 & 283, Albany.
Marker Text: Formed from Bosque County; created February 1, 1858; organized September 12, 1874. Named in honor of Dr. Jack Shackelford 1790-1857; captain of the "Red Rovers," a company from Alabama which became a unit of Fannin's command - one of the few spared by the Mexicans in the Massacre at Goliad. Albany, the county seat. (1936)

Marker Title: Smith's Station
Address: US 180 W of Albany about 12 miles.
City: Albany
Year Marker Erected: 1982
Marker Location: (Not accessible from car) -From Albany, take Highway 180 west about 12 miles to county road, then take county road south about 2 miles to "Smith Station of the Butterfield Overland Mail" trail sign, then follow trail about 4 miles east.
Marker Text: From 1858 until the outbreak of the Civil War in 1861, a station of the Butterfield Overland Mail Route was located here. Despite a brief existence, it was an important stop of the early stage line that reached from Missouri to California. Stages made the trip in under 25 days, a marked improvement on earlier communication links with the rapidly developing west. Located on Chimney Creek between stage stops at Clear Fork (26 miles northeast) and Fort Phantom Hill (12 miles southwest), Smith's Station was the only Butterfield stop located in present Shackelford County. (1982)

About 1872, Banty Allen, Jackie Daniels, Wm. Clayton, James Yandell Ralston, and others, who lived within a few miles of the present cities of Strawn, and Ranger, went to the old Ledbetter Salt Works, about nine miles south of Albany for salt. Several others were around the salt works at the time, and buffalo hunters camped nearby. Just after sunrise, Banty Allen went over the hill, six or eight hundred yards east of the salt works, to get some wood. He was alone and killed by about four Indians. Joe S. and James Schoolcraft, and Geo. Funderburgh, who were hunting buffalo, found Allen in a very few minutes after he was killed. Joe Schoolcraft stated that Allen was unarmed, and lanced to death. But another report states that Allen was killed with guns. If so, it means that the guns were not heard at the salt works. Regardless of how he was murdered the Indians added another grave to the Davidson Cemetery, between Strawn and Thurber.

Note: Author personally interviewed Joe S. Schoolcraft, who was one of the first to reach Allen; Mrs. John Gibson, who then lived about one-half mile from Banty Allen's home; and one or two others. Also corresponded with Walter Cochran, who then lived in the Strawn territory.