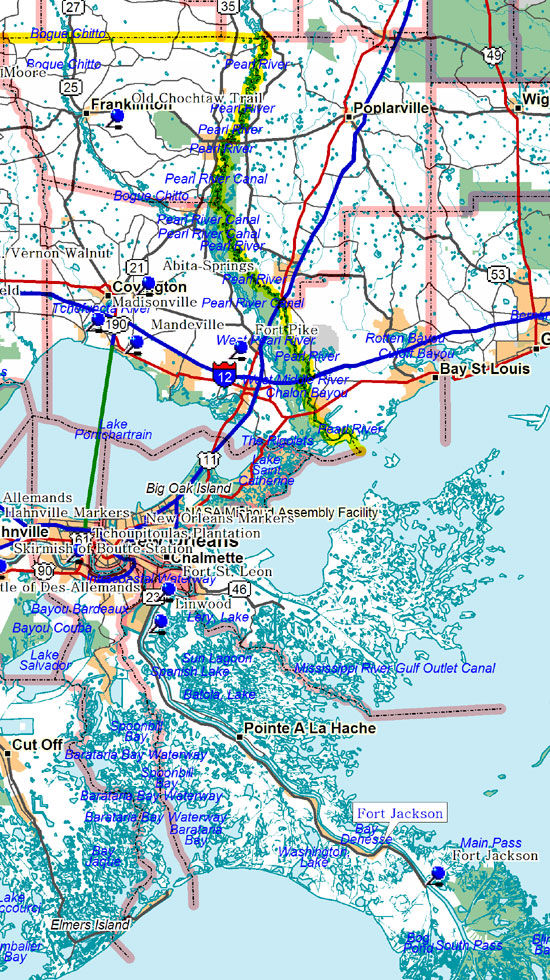 Established by Colonial French in the early 18th century. Rebuilt by the Spanish - 1779. American restoration - 1808. Built to protect New Orleans from attack by way of Lake Pontchartrain.

Traveled on by Iberville, 1699 and named for the French minister of Marine. Indians called it Okwa-ta, wide water. First port of embarkation was at the site where bayou St. John flows from this lake. It was the first water route to the city of New Orleans.

First sited as Indian portage to Lake Pontchartrain and Gulf in 1699 by Bienville and Iberville. Founded by Bienville in 1718; named by him in honor of the Duke of Orleans, Regent of France. Called the Crescent City because of location in bend of the Mississippi.

Designed by De Verges and garrisoned in 1754, but abandoned in 1792. Because of strategic value it was rebuilt by Latour in 1808 and garrisoned to defend New Orleans; Destroyed by Adm. Farragut during Civil War in advance up river.

Le district des Allemands, settled by Germans about 1720, the scene of numerous skirmish resulted in capture of an entire detachment of Union soldiers on September 4, 1862.

Located in Killona, LA, Dist. 2, Five miles above Hahnville on the West Bank of the Mississippi River, St. Charles Parish.

Old Choctaw village which derived name from nearby medicinal springs. Last Choctaw burial and execution grounds, used until about 1880, located nearby.

Originally called Cokie (from Coquille) because of the abundance of shells in the area. Renamed for President James Madison, c. 1811. Site of Navy Yard in early 1800"s. According to legend Gen. Andrew Jackson, enroute to New Orleans in Nov. 1814 stopped here at the home of Gen. David B. Morgan.

Named for Pierre Philippe de Marigny de Mandeville, landowner during the late seventeen hundreds. Near this site Bienville met, in 1699, Acolapissas who reported that, two days before, their village had been attacked by two Englishmen and 200 Chicasaws. English were rivalling the French for this area.

Only official state road in Washington Parish until 1843. Choctaw Indians cut trail for trade with tribes in Baton Rouge, New Orleans, Biloxi, and Mobile. White man believed to have used trail as early as 1542.