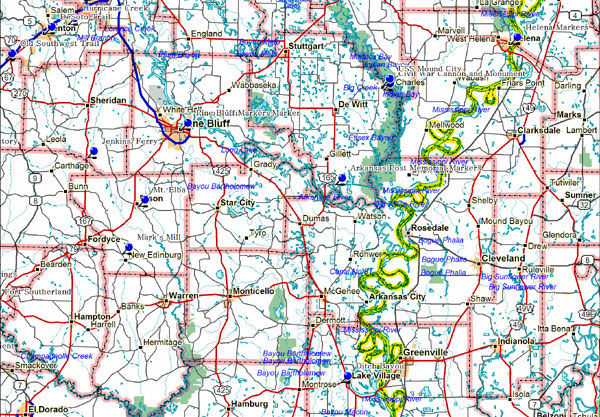 Here on June 6, 1964 600 Confederates with six cannons commanded by Col Colton Greene attempted to stop the advance of a large Union force of infantry cavalry and artillery. Concealed in heavy timber on the north side of Ditch Bayou, the Confederates withdrew only when their ammunition was exhausted. The Union troops lost 40 killed and 70 wounded, camped at Lake Pillage before returning to their river transports. The Confederated lost 4 killed and 33 wounded. The battle was the last significant Civil War battle fought on Arkansas soil. Ditch Bayou on Hwy 82, 1.8 mi. east of US-65, Chilcot County

After the fall of Little Rock to Union forces in September 1863, the area immediately south of the Arkansas River became a No Man's Land. On the morning of October 23, 1864 a detachment of the 7th Army Corps, returning to Little Rock after raiding the Confederate Arsenal at Princeton, was engaged by Logan's 11th Arkansas Cavalry, CSA, at a point one mile southeast of this spot. The ensuing battle was fought at the Hurricane Creek Crossing of the Old Camden Road and resulted in 28 men killed, 11 wounded and one captured. Saline County

Federal forces were retreating back towards Little Rock from Camden in rainy, muddy, and foggy conditions on April 30, 1864 when they were attacked by Confederate forces under General Kirby Smith. Confusion and conditions on the field favored the defender and the Confederates retreated to the bluffs they had charged from. The Federal retreat towards Little Rock continued. 13 miles south of Sheridan on Ark. 46.

The Battle of Mark's Mill, fought here on April 25, 1864 was a complete Confederate victory. General James F. Fagan's Confederate Cavalry having surprised and captured a Union Army of 2000 men and 2400 wagon loads of supplies. General Powell Clayton, the Union Commander narrowly escaped capture by flight with a handful of his Cavalry. The Confederate victory forced Union Maj. Gen Fred Steele to give up all thoughts of uniting with Union Maj. Gen Nathaniel Banks on the Red River. This is the location of an ambush by Confederate Cavalry against a Federal supply train of over 200 wagons, commanded by future reconstruction Governor Powell Clayton, headed towards Pine Bluff to pick up supplies. The attack began as a straight up fight until General Shelby's cavalry arrived on the Federal flank which finally ended in a Federal surrender. The future Governor Powell managed to flee with a small cavalry escort. The outcome of this battle forced Federal General Steele to abandon southern Arkansas and start an arduous and dangerous retreat back to Little Rock. The battle is detailed at a State Park. Located at the intersection of Highways 8 and 97 in Cleveland County

On March 30, 1864, Union forces, led by Colonel Powell Clayton arrived back at Mount Elba to dismantle a Pontoon bridge they had erected earlier. His force was engaged by a strong Confederate force of Slemmon's Brigade at Mount Elba battlefield. Located at the end of Mount Elba Rd. off Hwy. 35-S near Rison.

The Southwest Trail, which passed this point, was one of the first permanent roads across Arkansas. It ran from Missouri through northeastern Arkansas to Little Rock and on through Washington to Fulton on Red River. Thousands of settlers followed this route to Arkansas and Texas. The Southwest trail was also known as the National Road and the Old Military Road. Saline County, Benton

Site of "the deadliest shot of the Civil War". On the morning of June 17, USS Mound City, St. Louis, Lexington, Conestoga, and transports proceeded up White River towards Saint Charles attempting to re-supply Maj. Gen. Samuel R. Curtis's army near Jacksonport. A few miles below Saint Charles, the 46th Indiana Infantry under the command of Col. Graham N. Fitch disembarked, formed a skirmish line, and proceeded upriver towards the Rebel batteries on Saint Charles bluffs, under the command of Capt. Joseph Fry, C.S.N. At the same time, the Union gunboats went upriver to engage the Rebel batteries; Mound City was hit and her steam drum exploded scalding most of the crew to death. More than 125 sailors from the Mound City were killed, but the other ship was towed to safety. Col. Fitch halted the gunboat activities to prevent further loss and then undertook an attack on the Confederate batteries with his infantry. He turned the Rebel flank which ended the firing from the batteries and left Saint Charles open to Federal occupation.

Battle held January 9-11, 1863 in Arkansas County between the Army of the Mississippi (Union) and the Fort Hindman Garrison (Confederate States).

The flags of five nations have flown over Arkansas post: the white and gold stanched of French House of Bourbon, the red and gold oriflamme of Castillian Spain, the tricolor of Republican France, the American stars and stripes and the stars and stripes and bars of the Southern Confederacy. Citizens of each have lived and died in this area. Most are nameless; yet their sacrifices, brave deeds, and contributions to our way of life are not forgotten. This is the purpose of the memorial. Arkansas County, Arkansas Post Memorial is off U.S. 165, 20 miles south of DeWitt

Hindman Hill, southernmost of four positions fortified by Union Forces in June, 1863, was attacked by the 35th, 37th and Hawthorn's Arkansas Infantry Regiments under General Fagan CSA, at daybreak, July 4, 1863. Thwarted by the strength of the Union defenses manned by the 43rd Indiana, the 33rd and 35th Missouri, and the 33rd Iowa, Fagan's brigade retreated at 11 a.m. along the Upper Little Rock Road. About 250 men of the 37th Arkansas were captured after failing to receive the signal to withdraw. Total casualties for Fagan's brigade were 47 killed, 115 wounded and 273 missing. Phillips County - Helena. Civil War Battlefield Historical Site

For 137 years the graves of Confederate soldiers who perished from an unknown disease called "swamp fever" while encamped near present day Sulphur Springs were almost forgotten. Today the Confederate Cemetery is both an historical landmark and a showcase for Civil War enthusiasts. As many as 100 soldiers have been identified, and 65 headstones are in place.

The cemetery which was started during the war as a burial site for those men who died from disease in the hospitals of a camp of Instruction located at White Sulphur Springs Post Office in Jefferson County in 1862. This Cemetery later became the burial place for men from several units not only from Arkansas, but also from Texas and Missouri as they conducted operations that were supported from this military base. Possibly as many as 300 to 400 men may have been buried in this cemetery.

The cemetery was used after the war as a civilian cemetery until after 1912. It was abandoned and fell into disrepair during the middle portion of the 20th century and used for other purposes until 1995 when members of the Patrick R. Cleburne purchased the land and began the restoration process of this important piece of Southern Heritage, which involved not only White Southerner, but Loyal Black Southerner, Hispanic Americans as well as Native American in the Southern cause. Sulphur Springs, Arkansas, Jefferson County

In August 1862 the Union forces occupying Helena erected on this site a redoubt of earth and timbers to serve as the key to the city's defenses. Fort Curtis named for the Union general in command at the time of construction was on of five fortified positions which enabled Union soldiers to repulse a Confederate attack on July 4, 1863, designed to recapture the city and relieve the siege of Vicksburg. On the day of the attack 4129 Union officers and men under Gen. Prentiss were positioned in and around the fort against 7646 Confederate troops under Gen. Holmes. Phillips County, 601 Perry Street, Helena

A major engagement that occurred on the same day as the retreat from Gettysburg and the fall of Vicksburg. Confederate forces launched a three pronged assault on entrenched Federals occupying the town an supported by gunboats. One of the attacks reached its objective but did not receive necessary support. Union General Prentiss remarked that the assaults on the town exhibited "a courage and desperation rarely equaled." Historical markers throughout the city describe the battle. Helena cemetery is also worth a visit as it is the final resting place of General Patrick Cleburne, a Helena resident. Recently added to the Civil War Trust's Civil War Discovery Trail. Phillips County, Helena, Highway 49 at Mississippi Bridge

The Confederate Cemetery in Helena's Maple Hill Cemetery contains the graves of many of the Southern casualties of the July 4, 1863, battle of Helena, as well as the final resting place of Gen. Patrick Cleburne. Helena generals Thomas C. Hindman and James Tappan are buried in Maple Hill Cemetery.