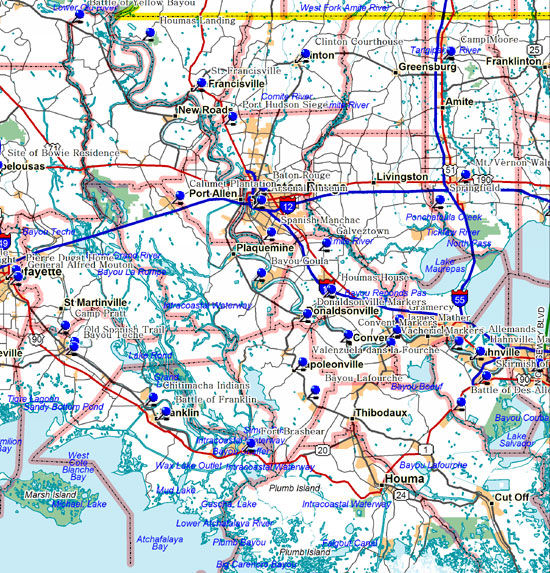 This church founded August 15, 1772 by Father Angel de Revillagodos on orders of King Charles III of Spain. Cornerstone of Present church laid June 1876 by Bishop Elder of Natchez and the April 14, 1896 dedication by Archbishop Janssens of New Orleans.

Jean Francois Buisson De St. Cosme of Quebec Seminary, Canada. First American born priest killed in this country and in Louisiana near this site by Indians, 1706.

Incorporated November, 1947, located partly on Indian-French settlement & trading post site. In 1739 much of this area was sold to Joseph delille Dupart, a Commissioner of Indian Nations under Bienville. Today area is location of various industries.

Scene of Civil War skirmish in fall of 1862. C 1850 Greek Revival plantation house owned 1854-1869 by Charles A. Kock, a prominent sugar planter. Listed on National Register of Historic Places in 1980.

Some early sources report that River of the Washas or the west fork was explored by Bienville (fall, 1699 from the Mississippi to Washa (ouacha) Indian village near here. Later the French would call the bayou Lafourche fork of the Chitamachas, then Bayou Lafourche.

Founded under Spanish rule c. 1778 by Canary Islanders, later joined by Acadians and others. Post believed to have been on site of Belle Alliance Plantation, 841 acre grant to Don Juan Vives, early Spanish physician, officer in the Galvez Expedition.

This Courthouse, built in 1840 is one of the architectural treasures of the state. The present building replaced a wooden courthouse that dated from 1825-26, which burned in March 1839. This is one of the oldest courthouses in Louisiana which is still in daily use.

From 1862-1863 Camp Pratt was official Confederate camp of conscription for South Louisiana. At one time as many as 3,000 conscripts here. A small compound for Union prisoners of war also located at the camp.

Named in honor of the Spanish Pioneers who for a period during the Colonial Era occupied the entire Southern region of the United States from St. Augustine to San Diego.

Home of Douglass C. Montan (1834-1896), who named this plantation Calumet after the Indian name for peace-pipe. Montan represented Iberville and West Baton Rouge Parishes in the La. State Senate. Montan wrote (1856) a popular book entitled Redstick which was about Baton Rouge life.

Confederate brigadier General from Lafayette who served in Shiloh, Lafourche, Teche, and Red River campaigns. killed in Mansfield, leading Confederacy to its most important military victory west of the Mississippi.

In 1776 Pierre Dugat received a Spanish land grant for this site, which became his plantation. Indian artifacts found on this site date from 3000 B. C. to about the eighteenth century.

Le district des Allemands, settled by Germans about 1720, the scene of numerous skirmish resulted in capture of an entire detachment of Union soldiers on September 4, 1862.

Located in Killona, LA, Dist. 2, Five miles above Hahnville on the West Bank of the Mississippi River, St. Charles Parish.

Large sugar plantation owned by Mather family until sold in 1879. James Mather, Englishman by birth, came to America in 1777; was active in Indian trade in West Florida area; was fourth mayor of New Orleans serving from 1807-1812. Here, on October 8, 1821, James Mather died.

Built (1837-1839 by Jacques T. Roman, this fine example of Greek Revival architecture is famous for its alley of 28 evenly spaced live oak trees, believed to be at least 100 years older than Big House. A National Historic Landmark.

This area, a ridge, extends from Convent through Gramercy and ends at Grande Pointe in the rear. On this ridge, the world’s supply of a unique crop, Perique tobacco, is grown, processed and shipped. It is also the site of Indian mounds and sugar cane fields.

James Bowie lived here with his family from 1815 to 1824. The Bowies operated several sawmills along the bayous of St. Landry Parish. The famous Bowie Knife became a legend in Opelousas prior to his historic death at the Alamo.

Four miles north are the remnants of once forceful Indian tribe. Decimated by war with French, 1706-1718, Many became slaves to colonists. The Chitimacha were the finest basketweavers of time.

Also known as Fort Star. Located one Half-mile south. This Union fort was the scene of an important military engagement on June 23, 1863, resulting in the confederate capture of 700 Federal troops and immense military stores.

One of the principal Louisiana Confederate induction centers and training camps during the War for Southern Independence. Named for Governor Thomas Overton Moore. Over 400 soldiers buried in the camp cemetery.

This tree grew from a seed of a walnut tree at George Washington’s home at Mt. Vernon. Planted Feburary 22, 1932 by the American Legion Auxiliary and Boy Scouts of Hammond in celebration of Washington’s bicentennial. Was transplanted in this location February 22, 1938 by Hammond Garden Club.

Portage of the Cross. Near this site Houmas Village was visited by Henri de Tonti, 1681, by Iberville and party March 20, 1699. A chapel was built by Father Du Ru, a mission founded by Father de Limoges, 1700. As Tunica Indians took over the areas Houmas moved by 1709.