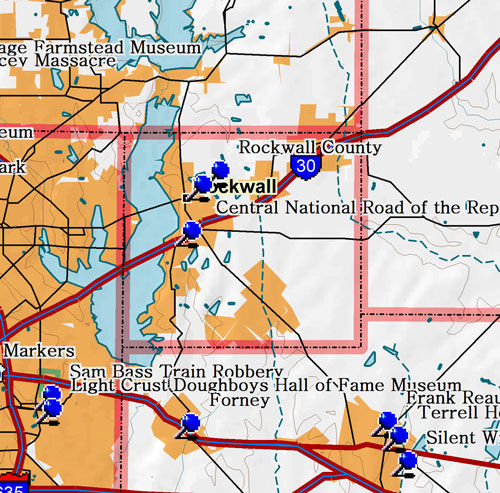 Central National Road of the Republic of Texas

Marker Title: Central National Road of the Republic of Texas
Address: IH-30 and FM 740, Rockwall
City: Rockwall
County: Rockwall
Marker Location: Marker was located at junction of IH-30 and FM 740 (southeast corner), Rockwall. Marker is currently missing.
Marker Text: In an effort to improve overland transportation, the Republic of Texas Congress authorized the Central National Road in Feb. 1844. The roadway was to be 30 feet wide and cleared of stumps over 12 inches high. A survey team led by Major George W. Stell platted the route from near the mouth of Elm Fork on the Trinity River in present downtown Dallas, northeast to Kiomatia on the Red River. The highway linked a road leading south to Austin and San Antonio with a U.S. military highway extending north to St. Louis from Fort Towson in present Oklahoma. Running east from Dallas, the Central National Road turned northeast to cross the area that is now Rockwall County. Portions of FM 740, known locally as Ridge Road, follow the historic route. The earliest Rockwall County pioneers settled near the road about 1846. Sterling R. Barnes located his homestead about two miles south of the present site of Rockwall, and John O. Heath settled near the crossing of the East Fork of the Trinity River. The towns of Heath, originally named "Black Hill" and later "Willow Springs," and Rockwall, the county seat, were founded along the highway. (1977)

Marker Title: Rockwall County
Address: 100 block of South Goliad St.
City: Rockwall
County: Rockwall
Year Marker Erected: 1976
Marker Location: Courthouse lawn (100 block of South Goliad Street and 100 block of West Rusk Street) Rockwall.
Marker Text: First settled in the 1840s, this region was a part of Kaufman County until 1873, when Rockwall County was created. With an area of 147 square miles, this is the smallest of Texas' 254 counties. The county and city of Rockwall were named for an underground formation of rock discovered in the early 1850s. Crossed by the Missouri, Kansas & Texas Railroad, Rockwall county is an area of fertile farmland. The location here of the aluminum industry and the creation of Lake Ray Hubbard from the East Fork of the Trinity River diversified the local economy in recent years. (1976)